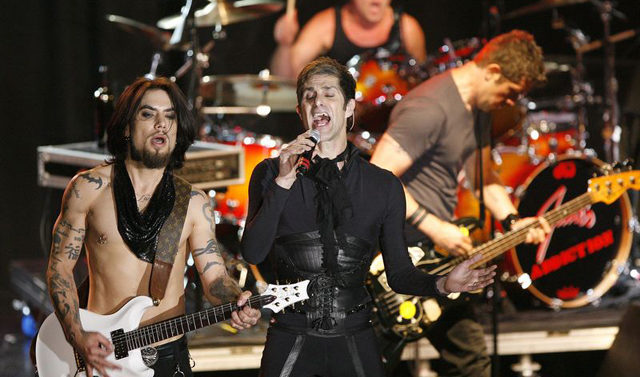 Festival season marches on: The lineup for this year’s Music Midtown, which happens Sept. 20–21 at Atlanta’s Piedmont Park, was unveiled yesterday.

It’s generally pretty OK: Along with Queens of the Stone Age, whose new album has been blowin’ up the webz, the lineup features rapper Kendrick Lamar, Georgia rockers the Black Lips, French popsters Phoenix and the newly reinvigorated Yeah Yeah Yeahs. Even the headliners, Red Hot Chili Peppers and a reunited Jane’s Addiction (see funny photo above), are nothing to scoff at.

But, like most medium-sized festivals, there’s a notable dearth of continuity; the schedule is a weird mix of “this is who’s hot” and “oops we blew all our moneys on RHCP,” with a healthy dose of double-you-tee-eff thrown in for good measure.

The Mowgli’s? Reignwolf? I don’t know who those bands are. (Also, The Mowgli’s what?)

Weezer? That’s pretty cool, as long as they only play songs from their first two albuhhhhhh j/k.

Tickets for Music Midtown go on sale this Saturday, June 22, at 10 a.m. Peep the full lineup below.

Another Cyclist Hit by Car

From the Archives: Herb Guthrie’s Missionary Work in Uganda