Bonnaroo Behind the Scenes: The Paul McCartney Zone 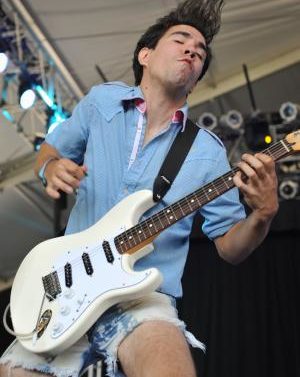 People often ask us what we like playing more: house shows and intimate club gigs, or big festivals and places like the Georgia Theatre. There’s no easy answer to this question, because they are extremely different experiences that are each fun in their own right, and I’m grateful to have ever done any of it. One thing that I do enjoy about larger festival crowds is that they are generally devoid of pretension and posing. No one at Bonnaroo seems remotely worried about their cred, and sometimes I’d actually rather see the shirtless fat guy with a “COEXIST” (like the bumper sticker) tattoo on his chest walk into my life than the self-conscious, joyless suburban punk painted into his corner at a lot of dive bars and house shows. Of course I know that nothing is anything all the time, so comparing caricatures sounds a little overly-polarized, but Bonnaroo is an extreme place.

So this weekend, the big festival gig was fun to play. After some much-needed down-time among the shade of my campsite, my partner and I took the advice of our sax player Walter and decided to scope out ex-Miles Davis and Mahavishnu Orchestra guitarist John McLaughlin’s set later Friday, but I couldn’t get myself jazzed about the unrelenting shred wall that towered before me. Nearby, Jim James’ soul revival proved to be much more my speed, but I felt compelled to follow the call of the Wu-Tang Clan coming from across the field. The sheer expansiveness of festival settings has never done hip hop any favors in my experience, however, and the Wu struggled to gain momentum, though they were ultimately saved by the strength and energy of Method Man, who blew the place apart every time he took the mic.

I began to think sweetly of my boys as I wandered over to the Paul McCartney zone. Their site in RV camping was unshaded and being pumped with a constant stream of carbon monoxide from a nearby generator. Did they suffer? It was not for me to know, sadly, as my phone remained toast. McCartney appeared. Slayed. “Paperback Writer” sounded huge, and I teared up a bit during “Blackbird.” It was like that. “VIP Access” to artists of his size doesn’t really exist for third-tier schmucks like Reptar; there are some special bleachers far off to one side of the stage that we could sit in, but they’re at such a severe angle that it really isn’t any better than just being out in the field.

A friend’s dad harbored the notion that I might meet, or even so much as catch a closer glimpse of, Sir Paul, but when there are thousands of artists (and their crew members and friends) wandering around at an event like this, the hierarchy is understandably vast and rock-solid. As I headed back to camp to try to recharge for ZZ Top and Animal Collective later in the evening, I felt exhaustion beckoning once more and submitted, allowing myself to be rocked to sleep by the cradling bass of Pretty Lights just a few hundred yards away.

As I stood in line for a shower (located inside a mobile locker room of sorts with 16 stalls that, along with copious tree cover outside of bus/RV world, was an invaluable amenity available in the artist campground) around 10 a.m. Saturday morning, I reflected on a conversation that my partner and I had following Paul the night before. The caveat to my earlier assertions about the overall positive and unpretentious nature of festival crowds is that a gigantic farm or airfield or whatever is a visually and sonically poor environment for experiencing live music. The intricacies and intrigues of viewing a band’s physical performance is rendered inert by the sheer size of everything surrounding the band, and your own probable distance from them. So, then, there are screens projecting a live feed of the performance on either side; however, I found that I often felt no more present in the moment staring at a screen in the middle of a field with the performance actually happening 40 feet from said screen than I would staring at a screen from inside my bedroom.

The cavernous reverb that parasitically attaches itself to all sounds emanating from the stage smears those sounds like rained-on newsprint. Generally, big music festivals like Bonnaroo serve as a type of science fair filled with rock-band dioramas exhibiting simulacrums of what a rock and roll band looks and sounds like. However, this expo atmosphere is not so much a matter of authenticity as it is accessibility and the limited potential for the sound forgers on stage to do their deeper job: namely, to channel their own true sorcerer spirits and transfer the people in the audience to a realm where the artists cast spells that alchemize the air itself into music.

Another Cyclist Hit by Car