SXSW: Hello, Austin! How Ya Been? 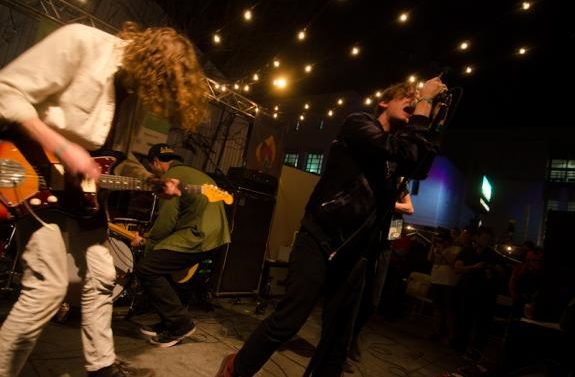 After a crazy flight delay and this weird confusion surrounding press credentials that took 28 hours to correct, I’m glad to report that SXSW is still cacophonous, occasionally confusing to the point where it starts to feel intentional and packed beyond any reasonable comprehension with a billion characters suffering from what I like to call “Me-Too!”-ism.

And the thing is, a lot of the Me-Too-ers have legitimately cool ideas and stuff to promote (make no mistake, SXSW is as much about the trade as it is about actual music. Sometimes moreso. Scratch that, a lot moreso), but there’s a whole lot of tossed-off, patched together “parties” that seem like some “promoter” pasted together just so he/she could scam free booze from an unwitting sponsor and get his/her friends nice-n-plowed for cheap. But that’s not what I want to talk about.

First celebrity sighting was the King of Free Money, Matthew Lesko. You know the guy. He wears a suit covered in question marks and sells books on TV. I asked him if he was having fun and he said, “Yeah. This reminds me a lot of Burning Man.” I wasn’t gonna get a better quote than that, so we parted as gentlemen with a nice handshake.

Ah, let’s see. Bands caught last night were DIIV (halfway ruled, but seemed tired and all of them dressed like Mercer West), Marnie Stern (never “got” it before; still haven’t), Skaters (enjoyed, but was kinda dust-blind when I saw ’em. Decent non-dude-rock guitar-pop that still needs some oomph to make memorable, but still decent), Japandroids (although that was from the OUTSIDE of the gate surrounding Viceland (the temporary venue occupied by Vice Magazine and its sister Noisey). Erstwhile Flagpole contributor Sam Williams and I were actually inside but were cleared out by security per order of Austin’s fire marshall.

Ran into two totally drunk dudes from Australia outside who were complaining loudly to no one that in Australia such a crowded place would be considered empty. They looked at me and said, “Your fire marshall sucks!” I told them: 1) I’ve literally never had my fire marshall impugned, and 2) He wasn’t even mine, and that I was from Athens, GA. They said, “Ah! Athens. Cool.” We’re worldwide, folks. Then I told them that OF COURSE it would be considered empty, because in Australia fire burns upside down, right? As the words came out I wondered if they were gonna land right. The Aussies cracked up, called me “mate” and that was that.

Oh, yeah, Sam and I also saw Trash Talk singer Lee Spielman walking around incognito while Marnie Stern played. And that pretty much sums up the first several hours of SXSW 2013.