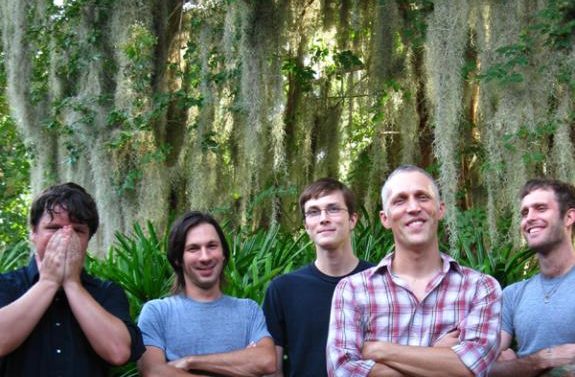 When Flagpole spoke to Holopaw frontman John Orth earlier today, the band was in Virginia, in the middle of an East Coast tour that will bring it to Athens Wednesday, and that landed it in New York on the night of a recent blizzard. “It made for sort of a dramatic night,” Orth says. “All our friends came out, and it ended up being really great. We walked through the snowy streets to get back to our house.”

The group’s latest album, the stunning Academy Songs, Vol. 1 (Misra), is a tenderly crafted concept album about an all-boys’ prep academy. It’s filled with the intricate detailing that has long characterized Orth’s compassionate, nuanced songwriting, which is at once subtle and drama-filled.

Flagpole: Holopaw is a very Floridian band, down to the band name itself. The national perception of Florida hasn’t always been the most positive.

FP: What does being from Florida mean to you?

JO: I realize that its natural wonderment has been ruined. Especially where we live, it’s a remarkably beautiful area. There are springs within driving distance, and live oaks and Spanish moss. It’s not developed, and so you can drive out of Gainesville and, in a few minutes, be in the country. It really is one of the only places I think I could live in Florida. I have a lot of affection for Gainesville. It’s definitely an oasis of liberal-minded people… and it does have a natural beauty that is very easily accessible.

FP: You recorded Academy Songs, Vol. 1 by the ocean. How did the physicality of that experience work its way into the music?

JO: Thematically, the record is about men living in close quarters, and we sort replicated that experience in the recording process. We all lived together for a week and a half in this beach house. And it was just really sweet and fraternal—we cooked a lot of meals together and stayed up all night recording, and in between takes we would swim in the ocean. It was really just a magical experience. It was sort of an effortless recording process, also. Part of that is because our friend that recorded us, Jeremy [Scott], was so adept at setting up a mobile studio. But also, the general vibe, I dunno, it was a great experience. I feel like that hopefully translates into the music… It feels joyful and exuberant, and that was definitely the experience.

FP: Holopaw has released four albums on three different labels. As a band that has experienced the capriciousness of the music industry and still managed to do whatever you want, creatively, do you have any words of wisdom for young bands starting out?

JO: All along the way, there are little heartbreaks, whether it’s internal strife—we’ve gone through many members over the years—or [bad] reviews, or not feeling like you’re getting the traction you would like. My only advice is just to keep doing it. And not to keep doing it with the hope that one day you will be making a lot of money, or have a lot of success, but to keep doing it because it’s worth it.

FP: Holopaw has evolved, stylistically, from a very stripped-down acoustic project to a full-fleshed rock band. Where do you see it going from here?

JO: When we started out, we were very sparse in our instrumentation, and the songs were a little less realized. A lot of that had to do with the fact that we were living in different states. And so, we would work on bare acoustic tracks—Jeff Hays and I—and we would turn it over to our friend Michael [Johnson, who was] out of state. We just didn’t have the experience of writing stuff together and really fleshing it out before we recorded it. [Now] we have the most stable lineup we’ve ever had, and this last record was very much a collaboration of all the members. That’s why all the songs ended up seeming more realized, more fleshed-out. I don’t have any predictions for where we’re headed. We’ve never made any predictions as to what the next record should sound like, the direction we want it to go in. It’s just sort of happened organically. My goal for the band is always just one more record.

FP: Speaking of that, Academy Songs, Vol. 1 obviously has a very deliberate narrative. Is there a plan for a volume two?

JO: I have enough songs written to justify a volume two. We’re performing one [new] song now that falls in line with that narrative. So that’s the implication, that there will be a volume two, obviously. But by the time we go to record it, I’m not sure that corralling those into one narrative is going to make sense. What always ends up happening with me is that new songs emerge that have to happen. Whether or not they’ll fit into that narrative, I’m not sure, but by the time we record, whether it seems like a cohesive body is what will justify calling it volume two [or not].

FP: Well, thanks. I really love the new album, and I’m looking forward to the show.

JO: Cool. We’ve played at Farm before and really loved the experience. Our good friend Clancy works there, so we’re excited to see him.