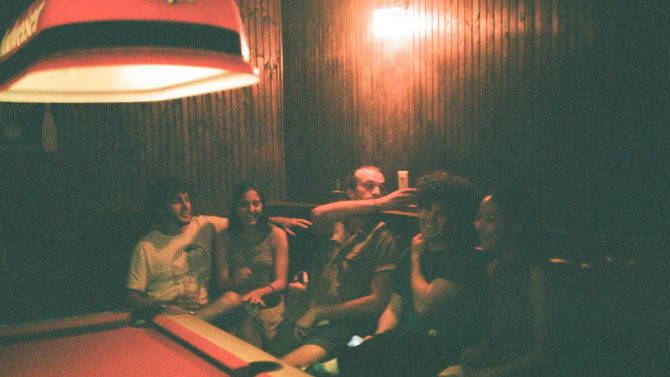 THE RAIN FALLS HARD ON A HUMDRUM TOWN: In addition to having a basically unsearchable name, new-ish Athens band Hoyas has a self-titled five-song EP out. Are you a fan of pre-superstar jangly Britpop? Well, you’re in luck, punter. From the sweeping Johnny Marr-isms of “Asteria” to the breezeway Sunday soul of “Roommate,” there’s a lot of late-night car ride indie pop happening here. In a lot of ways—the arpeggio guitar lines, the soft-’n’-murky vocals, the semi-timeless sense of place, etc.—this reminds me of 1980s Athens, when everyone talked about there being an “Athens sound” but no one dared describe exactly what that was, even though everyone knew what they meant. Yeah, it sounds like that. Find this at hoyas1.bandcamp.com.

BACKPACKS AND MUSTACHE WAX: Even though they just released a brand new album, Sleep Tight, Socialite, mere months ago, the hardworking dudes in Wanderwild have a new single out named “Doorway.” It’s one of those alternately big and small songs that’s quieter in the verse, then gets loud in the chorus. It’s all punctuated by and decorated with that telltale Wanderwild guitar shimmer-’n’-shine. This appears to be kind of a tour kick-off release, and the band will celebrate its coming out Wednesday, Sept. 11 at the Georgia Theatre with Grand Vapids and Nordista Freeze. The following week, they’ll hit the road for a short East Coast jaunt. This song will likely land at wanderwild.bandcamp.com by the time you read this, so look for it there. Also, check out wanderwildmusic.com for the whole story.

I DON’T WANNA WORK: The ace folks behind White Rabbit Collective will host the next Full Moon Gathering at Eden’s Café beginning at 5 p.m. Saturday, Sept. 14. If you’ve not been by Eden’s yet, it’s a vegan café inside the legendary—and instantly recognizable—former home of 1980s Athens staple Walter’s Bar-B-Q and, years before then, student ice cream joint Arctic Girl. This gathering will feature an outdoor drum circle and acoustic jam session, and there are solid plans to move the party elsewhere around 8 p.m. So, just ask someone there where it’s headed, and they’ll point you in the right direction. These gatherings are meant to be participatory and inclusive, so, you know, feel absolutely free to include yourself and participate. For more info on White Rabbit Collective, see facebook.com/thewhiterabbitcollective, and to learn more about Eden’s Café, head to facebook.com/edensvegancafe.

THIS NOTE’S FOR YOU: Torchiana is the project of songwriter and multi-instrumentalist Matthew Torchiana Hoban. Under this moniker, he’s done 10 releases of various sizes since 2015. I want to talk about the newest one, which is a full-length named As Long as I Gaze On…, which, yes, is a nod to The Kinks’ “Waterloo Sunset.” Although Hoban now calls Athens home, this music largely originates in Philadelphia. The signature sound is very personal acoustic compositions that are delivered as tough as scar tissue (“Wandering,” “Without”) or with such brittle sensitivity they threaten to fall apart while playing (“Have Another”). At 16 tracks, this is a tad overweight and kind of a right task to get all the way through, but I suppose you could chunk it out. Decide if it’s worth the effort at torchiana.bandcamp.com. Check out that back catalog while you’re deciding, too, if you’ve got all day.

IT’S WHAT THEY GOT: Echobass Records, Athens’ home for all things reggae and dub, just put out a new 10-song album by Pine Til Palms named Anura. This release is a few steps to the side for the label, mostly due to Pine Til Palms having a decidedly alterna-reggae vibe and mood. No, this isn’t anywhere near as bad as, say, Sublime or anything like that, but consider that, if not for the shouted vocals, a track like “Away From Me” could pass for a decades-old prom band that really wants to sound like The Police. Not that that’s the worst thing ever, but it shouldn’t be so obvious. Beyond this, the record really searches for personality but seems to have a terrible time finding any. It’s less a reggae record that slips in and out of 1990s-era alt-rock than it is the exact opposite. All that said, and because I feel generous toward and thankful for the risks and chances Echobass has taken on releases over the years, there are glimmers of hope here—namely, the grimy “Open Book,” which uses its horns to great effect, and the singalong-ish “Unattainable.” Check this out at echobassrecords.bandcamp.com.