Blanco Is Kxng of Summer, and More Music News and Gossip 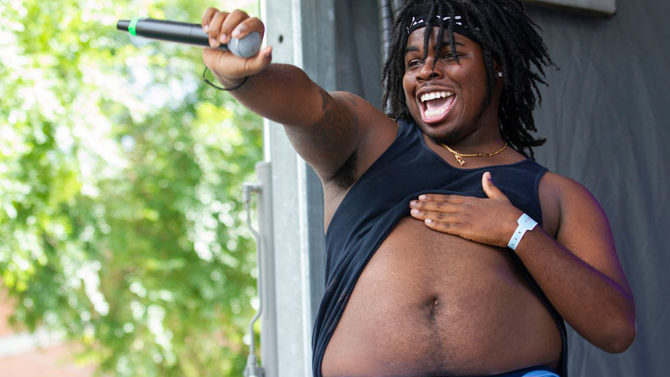 WORD, YOU HEARD?: So far, this has kinda undeniably been the summer of Athens rapper Kxng Blanco. He’s been super visible, recognized by his peers and showcased just about everywhere. So, it’s totally appropriate that he’s got a brand-spankin’-new album out named Skee Yee!. It’s a tight collection featuring only 10 tracks. Nothing here at all mimics the 100th-generation trap that’s polluting everything these days. And even when it veers slightly in that direction (“Woah!”), it’s got strength of composition and heft of delivery that most Fruity Loops users can only dream of. Indeed, this is refreshingly enthusiastic and wrapped in personality. The best tracks by far are the ones that lean in a little harder and eschew vocal effects (“Spazz!”, “Soul Food”). Of course, not everything here is great, and even this short record could have been trimmed by a few songs. That said, spin this loudly while summer still shines, because that’s what it was made for. Find it on every major streaming service.

KING OF CABBAGE FLOWERS: Back in 2015, based wizard Cabbage Looper released a mix named Pop Slop. Now, almost three years to the day later, Cabbage Looper (along with Sleepy Company) has released Pop Slop Vol. 2. Have you ever watched any of those hours-long Boiler Room sets where someone is spinning records during a sunny afternoon and people filter in and out of the house? This is what’s that’s like. There are no club bangers or fist-pumping anthems. There’s just good ol’ slow ’n’ low hip-hop-influenced instrumentals (“Flys Forever”), some early-’80s MIDI sounds (“Super Bandits in the Night”) and full-on cold groove (“Full Sail”). The only tracks that really kill the mood of this release are the wildly out-of-place “Resurfacing Leviathan” and “Co-Dependence Beach,” neither of which contribute in any worthwhile way. But hell, it’s not like you’re forced to listen to this on cassette tape. Just skip ’em! Start skipping at echobassrecords.bandcamp.com.

EVERYBODY GET TOGETHER: The annual Macon music festival and club crawl Bragg Jam happens Friday and Saturday, July 26–27. Created and maintained in loving memory for Macon native sons, brothers and musicians Brax and Tate Bragg, this year’s festival marks the 20th anniversary of their passing in an auto accident. Notable for selective and tasteful bookings across pretty much every genre, Bragg Jam has long hosted Athens groups. This year is no different—featured Athens acts include of Montreal, The Orange Constant, Bloodkin and Drew Beskin. Honorary Athens acts include Neighbor Lady, Futurebirds, Parker Gispert and Tedo Stone. Tickets are available now (obviously), and full two-day passes are $40 in advance. Read all about it at braggjam.org.

TO THE TOOTH: New local hip-hop-ish band Aldente—which deserves legit thumbs-up for that goofball name—just released its self-titled album. The great thing about this is it’s mostly live, as far as I can tell, with actual analog drums, even. I admit I’m a total sucker for Go Team-style beats, and opening track “Glue Stick” has them in spades. The whole record is kinda funky and mostly fun, although I can hear how it would get old after awhile. I was forewarned that “Swisher Sweetie” was “Bootsy Collins-esque,” and to be fair, the guitars definitely have a slight P-Funk flavor, but if you’re gonna name drop Bootsy, you’re gonna need to bring that bass. I dunno. I’m on the fence with this, but, you know, good fences make good neighbors. Find it on Spotify.

DEMON DAYS: Athens noise project Wuornos released two things this month. First, the single-track “Species Being,” and second, the five-track EP Ambient Softbois Die. Wuornos is self-described as being composed of “rot, dust, dirt, grime and sweet berry wine,” and I won’t disagree. These tracks are grievously disturbing—the stuff of nightmares. Unlike so many other noise-based projects, this stuff never recedes—even grudgingly—into any sort of anticipatory rhythm or sense of place. It grinds and yelps. It’s claustrophobic and deeply unsettling. All of which is to say, I think it made its point. If so inclined, listen in at wuornosath.bandcamp.com, but don’t plan on sleeping for a long time afterward.