What’s the Difference Between Organic and Naturally Grown? 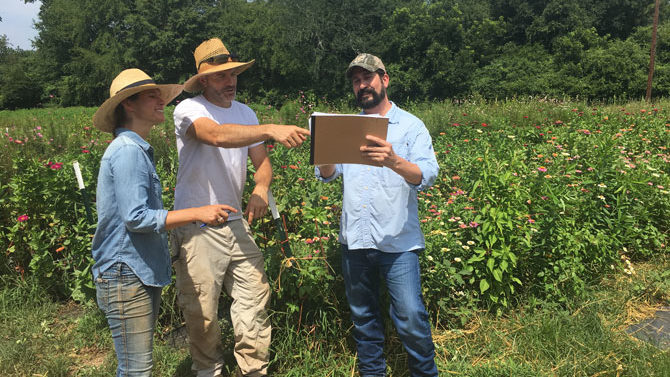 Farmers market customers have probably noticed that some farmers proudly display that their tomatoes, okra and squash are all “Certified Naturally Grown,” while other farmers boast the “Certified Organic” designation. Many local farmers markets, including Athens Farmers Market, require one or the other designation, giving their customers confidence that they are purchasing high-quality produce grown under tightly controlled conditions.

Certified Naturally Grown (CNG) uses a peer review system, in which local farmers agree to be inspected by other farmers to confirm they are following guidelines spelled out by a nonprofit based in Brooklyn, NY. According to the organization’s website, “Certified Naturally Grown farmers don’t use synthetic fertilizers, pesticides, herbicides or GMOs, just like organic farmers,” and farmers add that the CNG inspections include questions about sustainability and energy use. Adherents also say CNG simplifies the administrative burden on farmers, and that the annual fee is generally lower, about $150 per year for a smaller farm.

The Athens area has a dense concentration of CNG farms. Out of the 750 CNG farms in the U.S. and Canada, 107 are located within 100 miles of Athens, according to Suzannah Schneider, the organization’s communications manager. Diamond Hill Farm, owned by Athens Farmers Market President Carter Dodd, is a CNG farm, as are many of its other vendors.

On the other hand, Certified Organic farmers say their customers recognize and appreciate the organic designation, which was developed in the 1990s through a 10-year, sometimes contentious process of determining what should constitute the practices and policies of this type of agriculture. The certification became widely available only in the early 2000s, at roughly the same time the CNG organization started up.

Organic farmers will also point to the strict third-party evaluation by a U.S. Department of Agriculture-audited agency. The Athens-based Georgia Crop Improvement Association, a nonprofit organization that has 130 clients from North Carolina to Florida, is the sole agency in Georgia and one of 48 similar agencies in the U.S. Inspections are rigid, and inspectors review every receipt to determine the precise types of seed, soil amendment and other “inputs,” and will even conduct residue tests on leaves to ensure they are free of noncompliant chemicals, such as pesticides or fungicides. Terry Hollifield, the agency head, points to the regular training that his three inspectors undergo annually in order for the agency to remain certified by the USDA. Most small farms will spend between $750–$1,000 per year for the certification, but the USDA shoulders 75% of the cost.

Steve O’Shea, owner of 3 Porch Farm, cites factors that deter farmers from using the National Organic Program, including “costs [that] can weed out bootstrap farmers [who] already work 100 hours a week with little to no net income.” Although the USDA rebate makes inspection costs similar, record-keeping requirements are much more stringent than the CNG designation.

CNG “has made the more sustainable choice to approve non-GMO, corn-based plastic mulches” to conserve water and suppress weeds,” O’Shea says. He adds that the USDA has not approved plant-based mulches, but does allow less-sustainable polyethylene sheet mulch that leaves plastic residue in the soil.

Michael Wall, a spokesman for Georgia Organics, an Atlanta-based nonprofit, says about the two programs, “Both are really good. They’re different. Both have sets of pros and cons.” He points to the weakening rules for organic animal welfare standards, which he says are being rolled back by the Trump Administration. Wall also says that the organic certification process is “a more thorough, time-consuming and costly process,” which helps explain the higher prices for organic produce.

“CNG offers a convenient and quick way to communicate that a farm is using sustainable agricultural principles,” Wall says, and that the “CNG network, with its peer-to-peer support system, is pretty robust.” He also lauds the program’s marketing support services. He notes that, while the CNG label works well for farmers selling through CSAs and at farmers markets, wholesalers who sell to big chains such as Earth Fare or Fresh Market require that their suppliers have the organic certification.

Since more consumers are demanding reliable sources of carefully raised fruits and vegetables that are free of myriad suspicious chemicals and additives, farmers markets and CSAs will get a bigger share of their food budgets. These increasingly sophisticated consumers have learned to look for one of these two certifications, giving them confidence in the quality and purity of the food they provide for their families.