Kombucha Is Not a Figment of Your Imagination 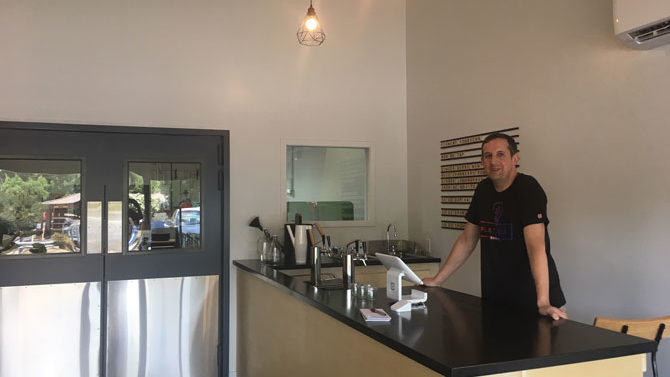 In a modest but immaculate storefront on Baxter Street next to the Uncommon Gourmet store, Figment Kombucha produces a beverage that seems to be sweeping the nation.

Enthusiasm for the popular tea-based fermented drink that carries a whiff of vinegar is growing unabated, as word circulates among the yoga and Lululemon set that kombucha has special powers to heal just about any ailment, from high blood pressure to cancer—even mental health issues.

The company’s products start with either green or black tea, along with some of the “symbiotic culture of bacteria and yeast,” or SCOBY for short, from previous batches. This colony of microorganisms may serve a probiotic function. It forms a kind of amorphous blob called “the mushroom” that feasts on the sugar added to the tea. This sugar also prompts the fermentation process. The SCOBY gobbles up much of the sugar during fermentation, though, so the final product ends up being a low-sugar beverage.

Researchers and physicians have long extolled the virtues of healthy intestinal “flora,” the trillions of microorganisms in the gut “microbiome” that convey nutrients, fight off “bad” bacteria, improve overall immunity and balance the system. In fact, many doctors suggest that the gut is the main source of the body’s immune system. A diverse population of these bacteria is beneficial, and this is where the benefits of kombucha and other fermented foods enter the picture.

But don’t count on fermented foods alone to keep you healthy. “This is an area very prone to exaggeration and hype,” cautions Robert M. Russell, a medical doctor and emeritus professor at Tufts’ Friedman School.

Jason Dean, who with Erika Galloway owns Figment Kombucha, points to the recent trend toward fermented foods, which include yogurt, miso soup, kimchi and sauerkraut, saying that they each provide their own diverse populations of microflora.

Fermented foods are gaining wide acceptance among chefs, as well, and Dean mentions that local restaurants like Five and Ten and home.made have extensive fermentation programs in their kitchens. Figment is also collaborating on new recipes with Creature Comforts and Akademia breweries.

Figment brings robust flavor to its kombucha with a variety of flavorings derived from seasonally available fruits, herbs and spices, many of which are sourced locally and provide their own medicinal benefits. Dean and Galloway, who met while working together at Five Points Growlers, tested a number of combinations and conceived their “core” flavors: ginger lemongrass turmeric, blueberry lavender and “rose,” a spritely blend with a fetching pale pink hue made up of rose petals, cranberry, pomegranate and herbs, which Dean intended to suggest the quaffable, refreshing taste of rosé wine. The day Flagpole visited, Dean and Galloway were brewing coffee for a new product they are experimenting with: coffee kombucha, flavored with Condor chocolates.

The spare retail space, which might remind consumers of the elegant minimalism of an Apple store and suggests Dean’s background in graphic arts, serves as the primary setting to buy the product. At the front is a small serving area that looks like a café, with a larger production area in back that might remind you of a science lab, with stainless steel kettles faced with measuring instruments precisely arranged on shelves. Dean also sets up shop at the Athens Farmers Market every week.

Dean opens a side door to a now-barren landscape that he imagines will soon host a garden where he can grow flavorings and invite visitors to linger and enjoy their beverages.

Kombucha is big business. As consumer tastes shift and the demand for traditional soft drinks continues its long plummet, juggernauts Pepsi and Coca-Cola have brought their marketing savvy to the arena as they purchase kombucha producers. Analysts expect the market nearly to quadruple in the next few years, from just under $1 billion per year in 2018 to almost $4 billion in 2023. A wide variety of kombucha offerings now jostle with specialty juices and other new products in the produce area at most local supermarkets.

After just a few months in business, Dean has already begun discussions with a distributor to expand the new company’s marketing reach into the region, including Atlanta. Dean anticipates that the Baxter Street facility can accommodate about double the company’s current production.