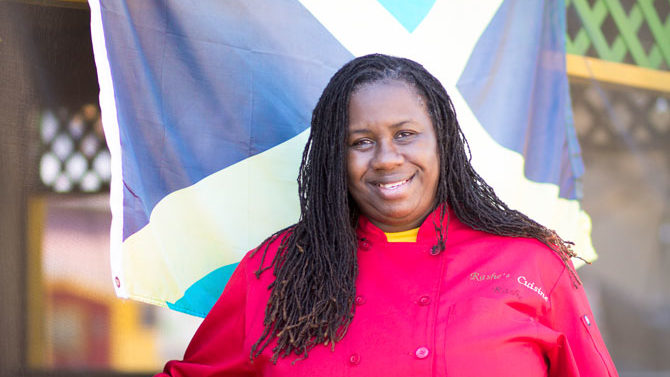 Rashe Malcolm, the onetime owner of the Jamaican restaurant Rashe’s Cuisine, has launched two new markets featuring food and other goods and is still working toward opening a commercial kitchen for budding food entrepreneurs.

First, she invited many of the vendors from her Winter Community Market, held on Saturdays during colder months, to participate in the Downtown Culinary Showcase, a late Tuesday afternoon sidewalk market located outside of City Hall with lots of freshly made local foods and crafts from local vendors. Offerings include vegan cupcakes from V Taste Cupcakes iced in bright pastels; breads, cakes, cookies and pastries from Enos Baked; hand-blended teas from Me Plus Tea, scented with coconut, vanilla, St. John’s Wort and other herbs and spices; Rashe’s Cuisine, served up at events this summer by her son Wayne, who is on his way to a football scholarship at Valdosta State University; herb-scented vinegars from Biger Creek, with flavors such as garlic-thyme, dill and rosemary; and crafts like cutting boards, Christmas ornaments and refrigerator magnets from Grands Designs.

Malcolm also has collaborated with Saphir Grici, the owner of the Holy Crepe food truck, to create the Sunday Brunch Fair, a family-friendly event at the Jittery Joe’s Roaster on Barber Street. The weekly events feature food, games, arts and crafts, live music and orange juice, in case you bring a bottle of champagne and wish to make mimosas. Grici also imagines adding water activities for summer, to help guests cool down in the heat.

The fair mixes Rashe’s Downtown Culinary Showcase vendors with food trucks organized by Greci to offer many choices for Sunday morning partiers. Food trucks include Holy Crepe, purveyor of French-influenced breakfast and savory crepes, such as “Almost French,” a crepe stuffed with brie, bacon, spinach and cheddar cheese; breakfast crepes with eggs, sausage, bacon and cheese; an Italian crepe; and soon, a Mexican crepe. Grici, who hails from France, welcomes the opportunity to mix cultures with his food, saying, “You can create something even more exciting when you combine cultures.”

Other food trucks that alternate week to week might include Da Munchiezz; Kona Ice, which offers flavored shaved ice treats; and Nedza’s Waffles and Doughnuts.

“We are happy with the results of the Sunday Brunch Fair,” Grici says. “We’re seeing people staying longer into the afternoon, with the adults staying at their tables with their mimosas and the kids playing all around with the games. It’s for the community to have something fun to do on Sunday.”

Malcolm has other projects underway, and chief among them is a community commercial kitchen project that also promises to serve as an important business incubator. Most of her vendors work from “cottage food licenses,” which stipulate, among other conditions, that the food producer sells directly to the consumer, not through other retailers or wholesalers. By creating a shared commercial kitchen, with its stricter regulations, these vendors will be able to sell through retailers such as Jittery Joe’s or Terrapin, providing a huge boost to the business potential for the vendors and giving retailers the opportunity to showcase locally made food products.

“The commercial kitchen is the next step in putting Athens’ local food producers on the map,” Malcolm says.

Aid for Blueberry Farmers: A Georgia congressman is attempting to secure help for the state’s blueberry farmers, whose crops were dramatically reduced in 2017 and 2018 by weather. The plants were prompted to flower by a late-winter heat wave, but as much as two-thirds of the fruit were later hit by a hard freeze in March. Rep. Buddy Carter (R-Pooler) negotiated the aid to Georgia’s blueberry industry. “Blueberries are a $1 billion industry for Georgia, and the backbone of many of our rural communities,” he said in a statement. “The loss of this crop isn’t only devastating for the growers, but entire local economies.” The aid is part of a $19 billion Senate disaster relief bill now being considered in the House.