Why Be a Locavore? 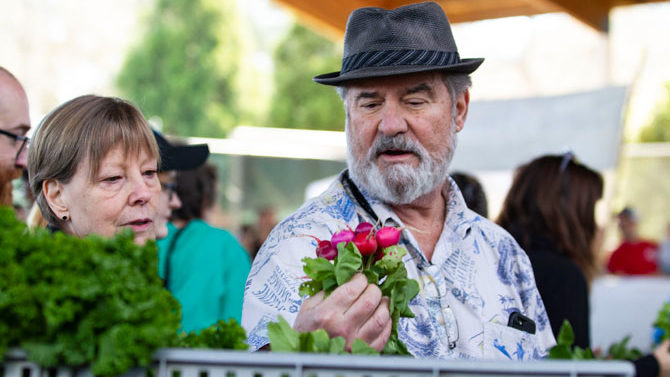 As customer demand for locally grown produce, meats and other foods grows, the number of farmers markets has exploded across the country. The U.S. Department of Agriculture started tracking farmers markets in 1994, when it listed 1,775 markets; by 2017 there were 8,600, with sales of more than $1 billion per year.

Athens consumers can buy from two farmers markets—the Athens Farmers Market at Bishop Park, which opened for the season Mar. 23, and the West Broad Market Garden, which kicks off May 4. Locally grown food is also available through “Community Supported Agriculture” groups (CSAs) such as Collective Harvest, a collection of local family farmers that markets directly to consumers with a different model. Brick-and-mortar retailers like the Daily Groceries Co-op and Opa Robby’s Market also offer primarily local food choices.

What is driving this growth? A survey of restaurateurs, growers, marketers and consumers suggests that more consumers want to have control over the kinds of foods they eat. They feel they can trust local farmers with “organic” or “naturally grown” certifications to produce fresher, tastier foods. A Washington State University study found that farmers producing organic or “naturally grown” produce obtain a 30 percent premium over supermarket fare. Yet each person interviewed for this article waved away concerns about higher prices, noting the extreme effort required to produce food of this quality.

What is the difference between the “organic” certification and “naturally grown?” According to Cameron Teeter, garden manager of the West Broad Market Garden, the USDA audits “organic” farmers, at great cost to the farmer. Farmers who offer “naturally grown” foods are audited by other local farmers to ensure that certain practices are upheld, often as strict as those adhered to by organic farmers. This peer review system is “a little easier and far less expensive, important for new farmers,” Teeter says.

The Athens Farmers Market estimates its annual sales at more than $1.25 million, and its board stipulates that vendors must be from nearby Georgia counties and either certified organic or naturally grown.

Local chef Lindsey Payne, owner of Lindsey’s Culinary Market, says she enjoys the seasonal variety and element of surprise of locally grown foods. “You don’t know what’s coming in, you have ideas that come to you from what’s available, and it keeps the menu fresh and customers coming in.”

Craig Page of the Athens-Clarke County Planning Department, who has long been involved in the locally grown movement, also likes the improved taste and freshness of locally grown foods. “Tomatoes are the poster child for a crop that commercial farmers only grow a handful of varieties,” he says. “Local farms can grow more heirloom varieties… that are sweet because they’re allowed to fully ripen on the vine.” Page adds that there is a human element to purchasing from local farmers because “people… also want to have the ability to shake the hand of the person who is producing your food.”

Jessica Rothacker is the owner of Heirloom Café and Fresh Market, and she has tied the success of her restaurant to offering plentiful choices of locally grown foods. “A lot of our marketing centers around having local food,” she says. “We have customers who are clearly eager to buy local, and they ask me where they can buy locally grown food.”

Collective Harvest, a CSA, is a partnership made up of seven farm families in the Athens area. They market sustainably grown fruits and vegetables to Athens area consumers using a subscription model. “People sign up at the beginning of each season to get a weekly, customizable box of seasonal produce,” says Collective Harvest General Manager Lisa Merva.  Deliveries are made to several Athens locations for pickup. Merva adds that the group hopes to have home delivery available by the end of the year. The group also delivers to several Athens restaurants, including Donna Chang’s, Five and Ten, White Tiger and others.

At the heart of the locally grown movement are the consumers who go out of their way to purchase local food. Teri Hamlin says she doesn’t pay attention to the premium she pays. “Cost is not relevant,” she says. “I have worked with farmers, so I know the kind of work that’s involved. If it’s certified organic, I know from my experience the work that goes into it.”

For some in a city where the poverty rate approaches 40 percent, though, cost is relevant. That’s why both local farmers markets double EBT (food stamp) dollars through partnerships with Wholesome Wave Georgia.

Hamlin, a retired educator, seeks the higher nutrition of locally grown produce. “I’d rather eat an apple from North Georgia with 98 percent of its original nutritional value than one that’s harvested in Washington and subjected to months of cold storage with 20 percent of its value,” she says.

David Berle, a professor of horticulture and director of the UGArden on South Milledge Avenue, points out that organic gardening in Georgia can be an uphill battle. “If you’re eating an all-organic diet, you’re going to have a hard time eating locally in Georgia, where you have high humidity and temperatures, which can mean lots of insects and fungus,” he says. Organic farmers and gardeners don’t have the same weapons against these pests as conventional ones. “We use cover crops like sun hemp to keep down Bermuda grass and other weeds in the summer,” when preparing the soil for fall crops like kale or lettuce, he says. “We also rotate fields and grow summer crops in gardens that have been sown with cover crops like oats and winter peas, which adds organic material and fixes nitrogen from the air.” Crop rotation, he adds, can also interrupt cycles of disease.

Even so, Berle is a big supporter of local food, and says that the UGArden grows upwards of seven tons of fresh produce each year, with three seasons of crops grown on less than an acre of land. Much of that goes to UGA Campus Kitchen, a “student powered hunger relief program.” But he adds that growing local is only part of the conversation, which he feels should include curbing the U.S.’s enormous amounts of wasted food.