Americans Are Buggin’ Out About Eating Bugs 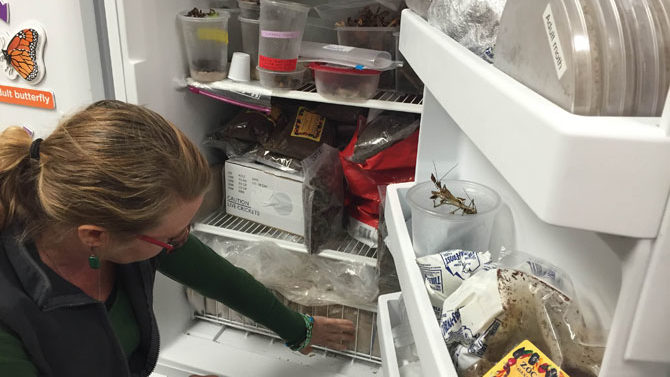 All over the world, people eat insects. In parts of Asia they’re sold as roadside snacks, as quick and easy to pick up as popcorn or a bag of pretzels. While that has not caught on here in the United States, edible insects are gaining an ever-growing following.

Edible insects were the focus of Athens Science Café’s program a little over a month ago. A selection of restaurants and other food businesses from around Athens were invited to create a dish using a choice of either crickets or mealworms. Community members were encouraged to sample these creations from a variety of vendors.

Marianne Shockley, a professor of entomology at UGA, first became interested in the idea of and possibilities surrounding edible insects as a graduate student at UGA in 1999. She began conducting research on edible insects a few years ago. More recently, she’s seen a jump in American interest levels, especially from the business side of things. Yet eating insects still isn’t part of mainstream food culture here, Shockley says—not yet.

“Here in the U.S., I would really compare it to a new food. Just because of our geographical location, it’s not something we grew up eating. Insects weren’t around in the winter,” Shockley says. “For all intents and purposes, it’s kind of the same paradigm you’ve heard it over and over again—sushi in restaurants and grocery stores 20 years ago would have just been a ‘no way, no how,’ because it’s a new food here in the West.”

The idea of eating insects seems to be intrinsically tied, in many people’s minds, to going outside and eating dirty, yucky bugs crawling around on the sidewalk or in the garden. Edible insect experts, however, are split on if that’s really the cause of eaters’ hesitancy.

“One philosophy of thought is it is that ick factor, but I really, really think, when you kind of pick that ick factor apart and you’re like, ‘Well, is a whole fish on your plate icky? Is a whole chicken on your plate? Is harvesting your own food?’ I mean, at what part of the food process are people icked out? And it’s pretty much all parts,” Shockley says. “So, you know, that whole concept of being disconnected from your food. With this push in organic ag and sustainable living and locally grown products and produce… individuals that are more open to alternative foods are going to kind of be the first ones to pick this up as an option.”

Jennie Phillips-De la Vega, owner of Mama Bird’s Granola here in Athens, has worked with edible insects as a part of her business for about four years. But, like Shockley, she first became interested in their potential while working in entomology at UGA. She was helping a graduate student with a project he was working on, realized she had a lot of insects left over and, on a whim, packed them up and took them with her to the Athens Farmers Market. It was a hit.

“I made it a dare, almost, for people, and they would bring their friends,” De la Vega says. “When they knew that I was going to have bugs, insect protein, in my granola, they’d bring friends and they’d stand there and wait in line to say, ‘I’ll eat one if you eat one!’”

UGA food science graduate student Cathy Micali first became interested in edible insects as a result of being passionate about sustainable food sources. She’s currently doing research in a processing lab, grinding up raw crickets to analyze how they can be used as an ingredient and discover more about their food properties so that they can be used as something more than just an additive.

“Eggs are used to hold cake together, so if crickets gel or denature at a certain point and can be used to hold things together, you might be able to substitute them for eggs. That’s super hypothetical, but that’s kind of where I’m going with it,” Micali says.

As insect protein ingredients become more popular—there are already energy bars and the like that use them—we may end up coming around to the idea. Those with shellfish allergies have to be careful, though—just as we often say an unfamiliar food tastes like chicken, insects’ shells might cause a reaction like shrimp.