Where to Find Ice Cream and Other Frozen Goodies This Summer 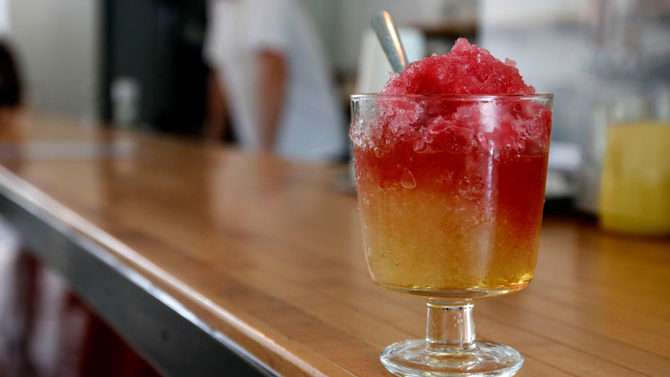 As I write these words, it’s 76 degrees and rainy, but you can be sure that it’ll be hot again soon, probably by the time this column runs. In other words, it’ll be perfect ice cream weather. When it gets up into the 90s, and you sometimes don’t even feel like having a proper dinner, ice cream is there for you, unless you are unfortunately lactose intolerant.

If you’re in that boat but still want something cold and sweet, Buvez (585 Barber St., 706-850-0172) has snoballs to help you out. A proper review of this new coffee shop/Euro café is yet to come—it hasn’t been open that long—and there’s still tinkering going on, but the shaved ice treats that originate in New Orleans are already on point. Lighter and fluffier than a snow cone, they can still give you brain freeze if you eat them too quickly. The syrups are made in-house, with the exception of the chocolate, which comes from Condor Chocolates (and is vegan, for the record). Flavors change frequently but may include a wonderfully tart lemon, a spicy and floral ginger-hibiscus, coffee (made with 1000 Faces cold brew) and a couple of boozy ones. You can add sweetened condensed milk or coconut condensed milk, should you want yours to be smoother.

Speaking of Condor, it’s added ice cream sandwiches made with its vanilla gelato. You can get them either at the store, in Five Points, or at the Wednesday evening Athens Farmers Market, downtown by Creature Comforts. Instead of going with a chocolate chip cookie or straight-up chocolate, which tends to get gluey, the shop opted for two crisp, beautiful oatmeal cookies, which pair very well with the smooth, simple ice cream. Packaged in an elegant little waxed paper bag, it is a grown-up treat. Just next door, Donna Chang’s makes similarly sophisticated ice creams in flavors like lemon curd, rice (!), passionfruit, green tea and coconut sorbet. Its lunch service has sadly come to an end, but dinner is now available every night.

La Michoacana… Es Natural (1635 Glenn Carrie Road, in Hull, with a smaller location inside the Eastside Cali N Tito’s, where it operates a counter, and a new food truck that pops up on the outskirts of the J&J on some Saturdays) remains the best ice cream in town, making a (frankly) ridiculous number of flavors in-house. Yes, if your kids want bubble gum-flavored ice cream, they have that, but there is also tequila, chamoy, guava, coconut, Ferrero Rocher, mamey, pecan, chocolate cake and many, many more. Beauteous popsicles, available near the register, come in leche or fruta, often with fruit or cookies embedded within them. The cheesecake varieties, which pair a fruit-flavored ice cream with a layer or layers of sweet cheese-flavored ice cream, are among the finest.

La Michoacana also now makes rollitos, or rolled ice cream. It’s not fast, but the process of the Instagram-friendly treat is fun to watch as the staff pours ice cream base and flavors onto a super-cooled metal slab, where the liquid is scraped around until it solidifies enough to shave into cigars of ice cream, packed into a cup and topped with fruit, nuts, coconut, raisins and more. It is essentially the same deal as at Roll It Up, on Alps Road, but a dollar cheaper. La Michoacana del Tio Tino, inside the Georgia Square Mall, on the food court, has similar churned ice cream offerings, but no popsicles. It is, however, much closer than Hull! Also on the westside but not open yet is yet another Michoacana (subtitled Antojitos Mexicanos), inside the La Jalisco grocery store (3750 Old Jefferson Road, at Camak Drive).

On the absolute other side of town, it is most definitely worth it for you to make a special trip to Off the Vine Produce, in Winterville, recently reviewed here for its hot food options. Although the store scoops ready-made ice cream six days a week, it serves fresh home-churned stuff on Saturdays and is usually out of it by the end of the day, when it closes at 4 p.m. The proprietor downplayed his blueberry ice cream, saying he had hoped it would have a more intense fruit flavor, but maybe that was just modesty. Flecked with bits of fruit, it tasted like actual blueberries, complete with variance throughout the bowl. The strawberry is just as good, and I imagine so are the other flavors. Prepared without the stabilizers required by commercial production, homemade stuff has a softer texture and a better mouthfeel.

There’s at least one underground ice cream shop in Athens, which will make your pints to order and deliver them to you, but I’m not saying where, because I want it to continue to exist! I have faith in you to figure it out. And if you’re looking to share with your pets, Oscar Bites, which sells at craft fairs and markets around town, makes a dog-friendly ice cream. No word on whether humans would dig it.