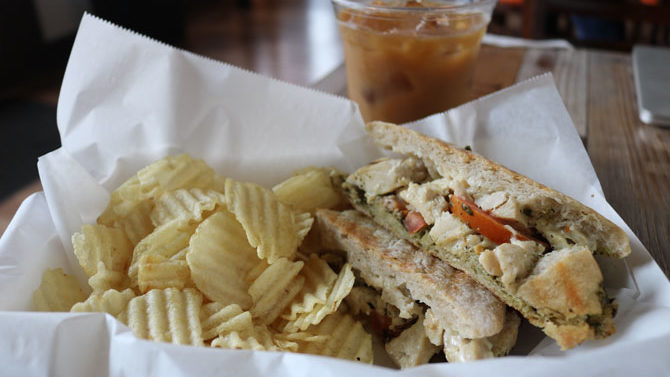 TOAST: By virtue of its location and name, it’s easy to mistake Franklin House Cafe (480 E. Broad St., 404-910-9565) for a UGA operation. The mid-19th Century building houses several UGA offices, as do the ones next to it, and the name is a little generic, if logical (the name of the building is Franklin House). Zeeshan and Arslan Khan opened the coffee shop at the beginning of the year, and they’ve spent some time tweaking their offerings since then.

The space is much larger than you’d expect from the outside, with an array of seating options and tables that include the name of the Wi-Fi network and its password on signs taped to their edges. Said tables also bear the phrase “first class” repeatedly, which is nice, except for when the text runs off the edge and they only say “ass.” Oh well. It’s a place geared to students, who may appreciate that levity. Unlike 1000 Faces down the street, Franklin House actively encourages lingering and collaborative work sessions, as well as customer feedback.

The restaurant has a wide array of coffee drinks, including pour-over, French press and iced coffee, plus smoothies (fruit, chocolate, peanut butter, vanilla and caramel; add a shot of espresso for a dollar), Fog of London (a spiced tea), hot chocolate and sodas. The food menu is small but has some good options, divided into sandwiches, a few salads and a section of toasts and waffles. Most of the sandwiches are pressed on a panini-maker and can be ordered as a half or a whole, although you want the whole unless you are ordering something else. Everything comes with plastic utensils, which isn’t really necessary for most of it and isn’t very effective when it is actually needed.

The sandwiches aren’t very exciting, and I hate to see stuff hanging out the sides of panini, but they also taste pretty good and come with a big handful of chips on the side. A spicy grilled cheese heavily dosed with sriracha—a special, not a regular menu item—is the kind of thing you could make in your kitchen but probably wouldn’t; it’s sort of nice to have someone make it for you. The “toast” section is the most effective, although sometimes the kitchen doesn’t have the thick-cut brioche that serves it best. Avocado, feta and tomato aren’t whirled together in a green slurry but chopped and smushed together in a way that maintains a texture for grown-ups. The ZK Special Toast (named for Zeeshan) is the house specialty, with strawberry, honey, sunflower seeds, goat cheese, cilantro and, if you want, a bit of chocolate drizzled on top. It seems like too much, but it kind of works, and it’s not too sweet.

SCOOPS: Since moving to Thomas Street from its Prince Avenue location, Lindsey’s Culinary Market (520 N. Thomas St., under 1000 Faces, 706-353-0558) has been able to expand into a regular lunch thing. You could get sandwiches before and ready-to-go casseroles to pass off as your own or feed new parents, and you could order catering, but there wasn’t space for a sit-down component, and now there is. The space is unrecognizable from its previous use as a band-practice facility. It was dark and cramped and a little creepy. Now it’s not. Hooray!

The experience isn’t super fancy—you order at the counter; food comes on small metal trays—but it’s nice. You can just get a snack (fancy chocolate bars, gummy things, baggies of housemade trail mix, cookies), or you can put together a whole meal. Sandwiches consist of shrimp salad, chicken salad, grilled chicken and pimento-less cheese and cost $10 or $11 each but do include a scoop of a fresh-made side from the refrigerated case. The same things are available as a scoop on top of any salad.

The sides change daily, but could include a savory tart with seasonal vegetables, a quiche with same, a barbecue pork quesadilla, an orzo salad with a bunch more veggies, a rutabaga casserole, spring-roll-type thingies made with collard greens for the wrap and a peanut sauce for dipping. Some are good—fresh and beautiful, with an emphasis on high-quality ingredients—while others need a pinch of salt to bring out their good side.

Weekends bring breakfast sandwiches—made with things that are more like rolls than biscuits, vaguely bagel-ish but less bready, and filled with eggs, cheese and bacon—as well as grits. They’re definitely a highlight, as are the cookies, which are big, thin and crisp, not fat and mushy like at most places. If you want to try a bunch of things, your tab will grow a little faster than you realize, as most things in the case run about $4 a serving.