Peaches Is Back on the Eastside, and Wing House Grill Opens in Hull 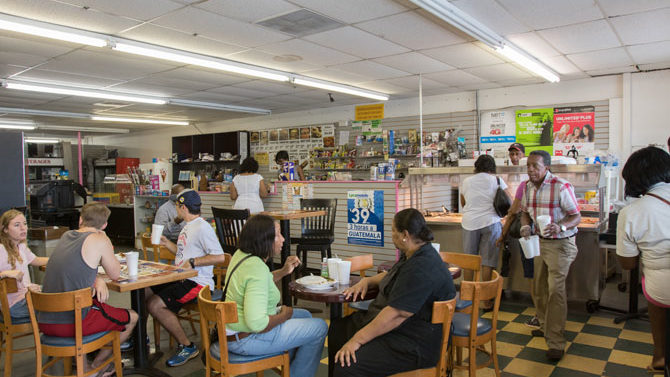 WELCOME BACK: The Gaines School Shoppes (on Gaines School Road near where it hits Lexington Road) isn’t the fanciest shopping center in town, but it’s played host to a series of eateries over the years that were worth a trip: Lighthouse Seafood in an earlier incarnation, Niece’s Soul Food Cafe and a marvelous African restaurant with peanut and okra stews. Now it has another, inside the African/Asian market that occupies the most central spot within the strip of businesses. Peaches, run by Glenda Brown, is back in business, and if the lines on a recent weekday were any indication, people have not forgotten how good her cooking is.

Peaches operated at one point on Oconee Street, where El Azteca is now; in its most familiar incarnation, it was in a building on the spot where Saucehouse BBQ is, torn down to make way for the water tower and the like. Brown also cooked for a time at The Camp, in Homewood Hills, which started off doing healthier Southern cooking, then shifted gears. It’s been awhile since you could get Brown’s food regularly, and although it is not what you’d call health food, it is hella delicious.

The setup is a long way from fancy, with the kitchen in the back of the market and a steam table up front manned by a couple of dudes who yell across the space when they need more of something. Walk in, get in line, tell them what you want, pay at the counter (credit cards are accepted), grab your tea or lemonade, and see if you can snag a table. There aren’t many. That’s OK. It tastes just as good sitting in your car, and both the to-go containers and the plates for eat-in are styrofoam.

Friday includes fried fish among the options. Fried chicken is usually available, and even if you are at the end of the line and you get the last three puny pieces in the metal tub, it’s still beautifully done: a batter that’s neither too thin nor too clumpy, some crunch, plenty of salt and juicy meat that doesn’t drip like it’s been injected with saltwater. Baked chicken, specifically that seasoned with lemon pepper, is as good as the fried stuff, and you can feel a little more virtuous. The corn (more fried than creamed, not deep-fried but skillet-fried, with a bright yellow color and some sauce but not pureed) is one of the best sides, but it has competition from the excellent green beans (soft but not melted into mush, with hunks of visible meat). Greens retain some of their bitterness, which is a pro, not a con.

The mac and cheese is too goopy, though, almost resembling a northern-style version rather than the traditional Southern baked casserole. The cornbread is fine but not exciting. It’s OK. No one’s 100 percent perfect, but the batting average at Peaches remains as high as it ever was. Go get you a plate or two Tuesday through Saturday, 11 a.m.–3 p.m.

WINGZ: For a town of 200 people, Hull and the area just outside it have a number of places to eat: Angie’s Place, Blazer’s, Bill’s Barbecue, Biscuit Express, La Michoacana… es Natural and now Wing House Grill (8727 U.S. Hwy. 29, 706-850-9700), a place that focuses on fried stuff, hot dogs and burgers and even serves beer. Right next to Biscuit Express, in a small shopping center, it has a large patio out back, populated with wooden picnic tables, hosting live music in the evenings and looking out onto a big, grassy field where your children would no doubt love to run around.

The food isn’t anything world-changing, but it’s well executed. The burgers are big and juicy (maybe a little too juicy for the bun). The hot dogs are substantial and meet with approval. The onion rings are great. The fries (curly or straight) are nothing special. The central house specialty is available in various combos and numbers and is pretty good. Honestly, it can be hard to discriminate that finely among chicken wings, which are fairly tasty even when they’re not all that good. There are also chicken tenders and good fried pickles with a mayo-ranch dipping sauce.

If you must order a salad, you will be accommodated, but it’s not really a place for vegetarians, unless they want to live on fried sides. The people who man the tables and the bar are friendly. Perhaps best of all, there is homemade strawberry and German chocolate cake, available by the large slice; other kinds of cakes have been available at other times. Opt for it over the cookies, which are prepackaged Oreos. You can order wine as well as three draft beers, and there are kids’ meals that include fries, cookie and a drink. Wing House Grill is open Monday through Saturday from 11 a.m.–9 p.m.