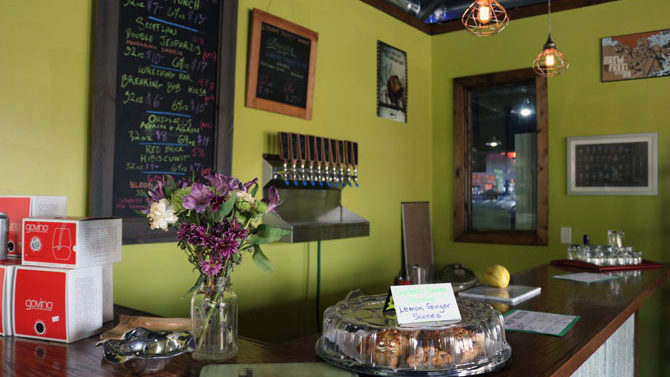 CONVENIENCE, PT. 1: Everyone loves to complain about a lack of well-distributed grocery stores in Athens, even though one is fairly able to cobble together a decent meal from the small options that are much better scattered around. Think about the old-time corner groceries now transformed into other kinds of businesses, then consider the placement of pharmacies, dollar stores and convenience stores. If you need some dried pasta and a jar of pre-made sauce, they’ll do you fine. They don’t help so much with produce, but you can grab that at the various Mexican groceries around town.

Never let it be said that J of J’s Bottle Shop, on Prince near Satula, failed to see and seize an opportunity. If people are going into Los Compadres to grab a tomato, that’s business he’s less likely to get. Normal Bazaar, an itty-bitty minimal grocery of sorts, is his brainchild, and it’s now doing business around the side of J’s that faces Prince. The offerings are still in flux, but they do include healthier staples than Funyuns. A small selection of locally grown produce sits in a cold case, and if you happen to walk in on a day when it’s nearing the end of its sellable life, you can pick up squash, cabbage, potatoes, green beans and such for half off. Ditto for the loaves from Independent Baking Co., including a pre-sliced multigrain.

Do you need some dairy? Normal Bazaar has fancy yogurts, some cheeses (regular and pimento), whole milk and more. Looking for healthier snacks? It also has an array of granola thingies and energy bites available by the pound or in prepackaged bags. Some of them are available for sampling and may even taste pretty good. There’s also savory stuff like Phickles Pickles and fancy crackers. Meal bases like Mary Alicia’s artisan pasta and Red Mule grits, polenta and cornmeal can be dressed up with some of the other offerings, like beautiful butter from grass-fed cows or nice eggs.

A small bar with a couple of stools takes up a big hunk of the space, selling growlers. In addition to a focused but good beer selection that changes regularly (indicated on a chalkboard), two of the taps dispense wine and one does nitro coffee, if you need to caffeinate a large group or your tolerance is high. The Holy Crepe food truck sets up nearby on most Fridays (you can find out when at holycrepeathens.com) if you are not in the mood to cook or even assemble. Normal Bazaar is open 10 a.m.–10 p.m. every day.

CONVENIENCE, PT. 2: Is it a bad thing that the Athens branch of Atlanta chain Tin Drum, in the Beechwood Shopping Center, has been replaced by the Athens branch of Atlanta chain J. Buffalo Wings? At the very least, it’s neutral. J. Buffalo isn’t a giant business, and it does more than just wings. It is, basically, a Chinese-owned version of American Deli, with a counter-based business model, a couple of TVs tuned to sports and a nice little row of succulents lending faint interest to its decor.

The wings are small but nice and crispy, not drowned in sauce. The fried fish is not as good as that at The Fish Shack, on Broad, but it’s not bad. If you want a gyro, there are better places to go. But if you’re looking for a totally good, classic fried rice, this is your place. The version J. Buffalo puts out is very straightforward, and the shrimp it can include are no great shakes, but the house version, which includes all the proteins plus egg, broccoli, green peppers, corn, onions, carrots, peas and bean sprouts, is well mixed, seasoned and cooked. If you want it spicy, you can add jalapeño or chili sauce.

You can get the same thing as lo mein, and that’s not bad either, but it is considerably greasier, because the wheat-based noodles don’t suck up as much of the oil. J. Buffalo also does regular and spicy ramen, but it’s not available for take-out, and I didn’t get a chance to try it. The business is open for lunch and dinner Monday through Saturday.