Is There Such Thing as a Good Cinnamon Roll? 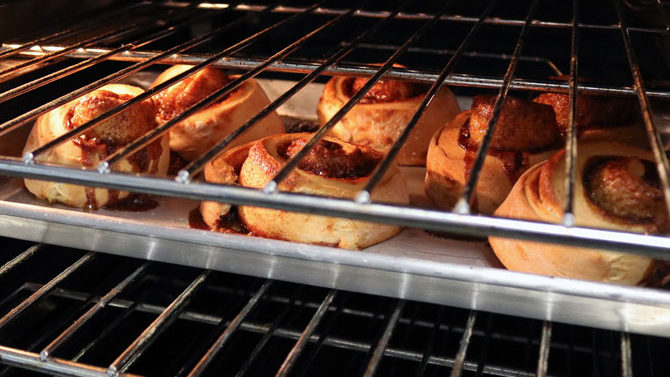 CINNAMON OVERLOAD: I have to admit that, unlike many of you, I was kind of dreading the opening of Cinnaholic (140 W. Broad St., 706-608-9100), on the ground floor of the Georgia Heights building downtown. I don’t really like cinnamon rolls, a fact that some of my friends have greeted with incredulity and even pity. Even worse, if the world can be categorized into two types of people—those who judge based on toppings/sauces/accessories and prefer them in abundance, and those who prefer their foods in a simpler state—I am the latter.

The thing about Cinnaholic is that it is specifically a cinnamon roll franchise built around being able to customize your cinnamon roll with different icings (cream cheese, yes, but also marshmallow, maple, chai, cake batter, amaretto and so on) and toppings (fruit, bits of cookie, nuts, caramel sauce). In other words, it takes a thing that is already fairly well built around excess—biscuit dough showered with sugar and cinnamon, then gooped up with either a cream cheese or a sugar-and-milk load of frosting—and adds hunks of Oreo cookie on top of it. If that is your thing, I will not be able to dissuade you, and you probably stopped reading in the first sentence of this column.

Cinnaholic is a bit unusual because everything in its store is vegan, and unless you’re comparing side by side with a butter-and-milk-based roll, you probably could not tell the difference. The company is clearly committed to its cruelty-free ingredients, and good for them. The rolls are fine, and so are the cookies. The frostings, unfortunately, taste fairly chemical. The prices are fairly high, clocking in at around $5 a pop and going up steeply depending on your toppings. On the other hand, the ideal clientele lives just upstairs and definitely wants a cinnamon roll at 10 p.m.

While I was having to eat these things, I went ahead and crowdsourced just to see if there might be a cinnamon roll around Athens that could convert me. Several folks said Cinnaholic. No dice. I also got a roll from Cinnabon, which is both inside and the worst thing ever to happen to Schlotzsky’s, because its odor pervades everything in Borg-like fashion. It was fine—kind of the classic squishy, medium-sized roll with gooey white stuff. Mama’s Boy came up, and if you like excess, it would be your place to go. The cinnamon roll is – no fish story here – the size of a dinner plate. It’s a cinnamon cake.

Heirloom Cafe makes the best of the classic style that I sampled, with a biscuity dough that’s not too sweet, a nice cream-cheese icing and good chopped pecans sprinkled on top that actually add flavor (it’s available at brunch). Out of town a ways, Madison’s Farmview Market offers them by the pan, and although they are sugary, they are not too goopy, and the results bake up well. I tried to get one at Sweetie Pie by Savie, but you can’t get them there except Fridays and Saturdays, and I didn’t manage to try Kumquat Mae’s either, but some folks swear by them, as well as IKEA.

The real answer for how to improve a cinnamon roll, though, is through devolution: removing the icing and picking a better, flakier pastry for the roll. Is it really a cinnamon roll in that case? It might not be, but it’s a better thing to eat. In this category are Independent Baking Co.’s “morning rolls,” which are too damn sophisticated even to be called cinnamon rolls and have something going on other than just cinnamon (cardamom?), and Panaderia Tacuari’s rolls, which are closer to orejas than to anything else and will run you only 95 cents with tax, despite being the size of a saucer.

BBQ BEAT: I passed through Gray recently and hit up Old Clinton Barbecue (4214 Gray Hwy.,478-986-3225). Open since 1958, it’s got plenty of atmosphere, with camo T-shirts, hand-labeled photographs of dudes with names like “Lil’ Ray” and shrink-wrapped slices of lime and 12-layer-chocolate cake on plastic foam plates.

The ‘cue is good, but better with its vinegary sauce than on its own. Ditto for the ribs, which have a perfect texture but not enough flavor on their lonesome. Far be it from me to highlight a side rather than a main at a barbecue place, but the potato salad is so good I licked the container it came in, studded with bits of hard-boiled egg, enriched with yolks and just gently accented with a bit of sweetish pickle.