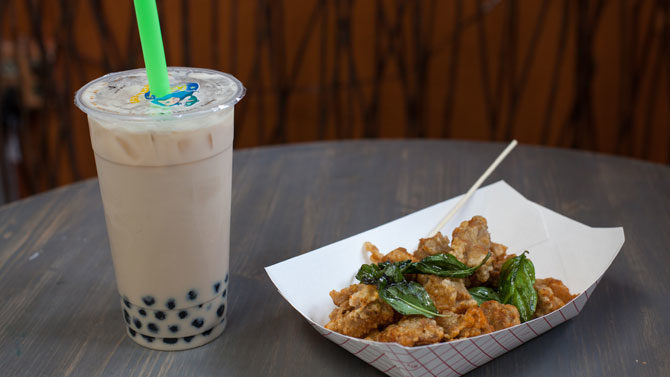 TEA TIME: For years, you could walk down the stairs underneath Marvin’s Shoe Service, on College Avenue downtown, to get a quick deli sandwich accompanied by the steady sounds of cobblers at work above. Under one name and another, the menu didn’t change much, with an array of lunch-meat sandwiches named for various newspapers, served with chips and a pickle. In October, A-OK Cafe changed hands quietly, from one set of East Asian owners to another, and got a new name, Bubble Cafe (154 College Ave., 706-355-3002). This time, however, the shift has been more dramatic.

As you might suspect from the name, it now offers bubble tea, the Taiwanese sweetened tea that comes with tapioca balls or hunks of fruit jelly to be sucked through a large straw and chewed, but there’s a good bit more on offer. Boards behind the counter feature sections devoted to snacks, “Asian sandwiches,” rice bowls and noodles, all with Chinese chalked next to the English, somewhat similar to 180°F Cafe’s offerings.

Some items are better than others, but the prices are good all around, with a half-dozen pot-sticker-style dumplings going for a mere $3.50 and a massive container of beef noodle soup (two meals for most folks) the most expensive thing available at $7.50. The sandwiches seem to be shooting for banh mi, but they don’t quite get there. The bread is too soft, there’s no jalapeño, and the meats on the “special combo” (Vietnamese bologna, pork head cheese and pâté) are kind of disappointingly wilted.

On the other hand, those dumplings are more than adequate considered against their price. They’re not world-rocking, but they are a hot and tasty snack for a pittance. You could also get an order of zongzi—sort of a Chinese tamale but with sticky rice instead of masa enclosing the filling—and pretend Athens has dim sum for a minute or two. Best among the snacks I managed to try were the salt-and-pepper chicken nuggets, a Taiwanese street food classic. A mere $3.75 gets you a dish of hot, salty, lip-numbing bites of chicken, served to be eaten with a wooden skewer, dunked into a sweet but not cloying red sauce and paired with fried herbs.

The rice bowls are fine but not exciting for the most part, served with half a tea egg, and including options like sesame chicken, sweet and sour pork, tofu with veggies (and/or curry) and pork belly (sliced into matchsticks and tossed in a brown sauce). One could combine the two and get a salt-and-pepper-chicken-nugget rice bowl, which might be the smartest option. On the other hand, the beef noodle soup is a gastro-warming Styrofoam container of comfort. Combining fatty-enough hunks of slow-cooked spiced beef with greens, herbs, wheat-based noodles and half a tea egg, it is an especially fine option during cold weather.

The drinks menu is large, with Ovaltine, smoothies, slushes, Thai coffee, honey-ginger tea, jujube tea and honey-apple tea available alongside milk and fruit teas that can be jazzed up with QQ jelly, popping boba and more. Prepackaged snacks (crackers, cookies), priced at 25–50 cents each, sit next to the register if you just want something light to go with your drink. Bubble Cafe is open from 11 a.m.–8 p.m. Monday through Friday, 1–6:30 p.m. Saturday and closed Sunday.

WOK ON BY: Epps Bridge’s Wok’s Up (1791 Oconee Conn., around the corner from Groove Burgers, in the same building, 706-521-5486) isn’t a chain yet, but it might be someday. In some ways, it feels like one already: branded T-shirts, a trademark symbol in the name, display shelf of sauces for purchase. In others, it feels more like a first-time operation, with amateurish, homemade signage and a staff that doesn’t quite seem to know what it’s supposed to be doing.

The concept is build-your-own stir-fry, selecting a protein (chicken, pork, beef, shrimp, tofu), veggies, sauce and base (noodles, greens, white, brown or fried rice) for the staff to toss in a wok in the open kitchen. It’s an idea that has had success elsewhere, with chains like Mongolian Grill or Atlanta’s The Real Chow Baby, because people like to guarantee they’ll like all the components of their dish.

The problem here is that, with fairly bland ingredients, the sauce ends up being the focus, and in this case, many of the sauces aren’t very good. The curry and the black bean are at least not loaded with sugar, and the former is passably tasty, especially if you incorporate potatoes. The kung pao, on the other hand, is far more sweet than spicy, despite the two chili peppers placed next to it on the menu. If your goal is fresh and unprocessed, you can do better, but if you want some heavily fried pot-stickers (skip the sauce) because you’re starving, the ones at Wok’s Up are decent.