Back on the BBQ Beat: JB’s and Big Daddy Mike’s, Reviewed 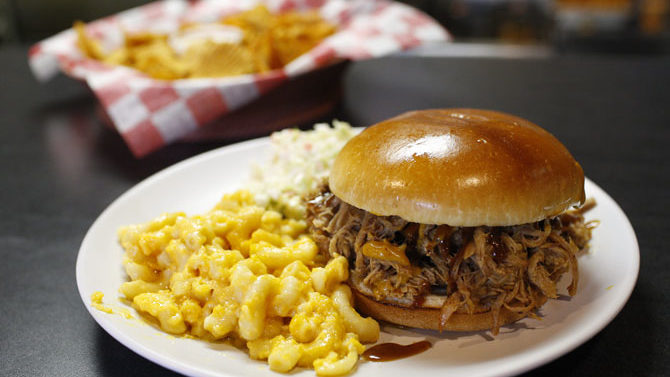 BBQ BEAT, PT. 1: Eight years after Floyd’s Grill closed and left its space vacant (let that sink in: eight years), the building at 64 N. Main St., just a couple of blocks from downtown Watkinsville, finally has a new tenant. JB’s Smokin’ Pig Barbeque (706-705-6116, not to be confused with the JB of Comeback Sauce fame) is the kind of place where the girls who work the counter tease each other loudly about not being able to change the receipt tape properly, and a Brunswick stew cauldron big enough for a jacuzzi serves as decor near the entrance.

There are some pig signs (the main one features a hog in a cowboy hat astride a bucking smoker) and some red-and-white-checked stuff, but the atmosphere isn’t laid on too thick. The owners haven’t run a restaurant before, but, at least for take-out, things seem to run pretty smoothly. The kind of sign with snap-in letters lists the menu behind the counter, and it features wings in quantities up to 100, chicken fingers, grilled cheese sandwiches and Nathan’s hot dogs topped with chili, slaw, cheese or combinations thereof, as well as barbecue.

The ’cue isn’t available in a huge variety of configurations. The only two items regularly on the menu are pork (both chopped and pulled) and chicken (half, quarter, sandwich). In general, there’s a good bit of smoke but not a ton of salt, which you may see as a positive or a negative, depending on your doctor’s recommendations. The underlying flavor of the meat is good, though, and it’s not overcooked. The chicken is superior to the pork, with a beautifully crisped skin. Sauce comes on the side, in a few options, all of which are pretty good: vinegar, mustard, a red that’s not too sweet.

Among the sides, the barbecue beans stand out. Beans aren’t usually notable in BBQ restaurants, which tend to pour on the sugar and cook the beans themselves into goo. I don’t even consider myself a person who likes baked beans. But these are an exception, with two different kinds of beans and a sweetness that feels genuine and understated.

The chicken mull, on the other hand, is not worth your time. Remember what you thought the first time someone explained the dish to you (ground chicken, milk and saltines all stewed together)? It tastes like that: bland and lumpy. The hash and the stew are pretty good, the fried okra likewise and the coleslaw simple but solid, finely chopped and not too sweet. Slices of pie are in the case, both chocolate chess and a nice pecan pie that, once again, isn’t over-sugared and has a nice thick crust.

It’s not the kind of BBQ worth driving miles and miles for, but it’s far better than it has to be. JB’s also does ribs on Wednesday and Friday evenings. It’s open for lunch and dinner Tuesday through Saturday, doesn’t do booze and has a nice covered patio out front.

BBQ BEAT, PT. 2: On the other hand, Big Daddy Mike’s Barbecue Bar and Grill (810 Hawthorne Ave., 706-850-3888) has very little to recommend it other than some extremely nice people who run the place and the fact that it has a full bar. Occupying the former Dickey’s, which itself was the former second location of Allen’s, it tries to be a lot of different things to a lot of different people, but it doesn’t do them very well.

Here are some of the positives. At least at the moment, you get a free order of the house potato chips, dusted with BBQ rub and served with ranch dressing. They work pretty well to stave off hunger. The spare ribs have a pretty good flavor and texture, not cooked to fall off the bone and with some decent bark. The wings, fried to order, are fairly large and fine without sauce.

But here are the problems. The pulled pork is dry and flavorless, the chicken likewise, and the sides no better. The macaroni and cheese is creamy, not baked, but the sauce is faintly gritty and the flavor not good. The beans are a poor comparison to the ones at JB’s, and the potato salad is sugary and weak. The stew and the slaw are marginally better. The place prides itself on its sauce, but that, too, is not good. One should be suspicious of a BBQ place with sauces in flavors like blackberry, and one’s suspicions are correct, but even the simpler sauces (mustard, sweet and spicy, sweet and savory) are too sweet, too spicy or otherwise flawed.

Chocolate caramel cake, highly recommended by the staff, is flat, sugary and tastes like it comes from a box. Maybe there are things on the menu that are exceptions, but I went twice and tried a high percentage of its options with little success. Big Daddy Mike’s is open for lunch and dinner Wednesday through Sunday, has a wide variety of signature cocktails (including a Pan-galactic Gargle Blaster, h/t Douglas Adams) and runs regular specials on both food and drink. It does take-out as well as dine-in and has a big patio out front.