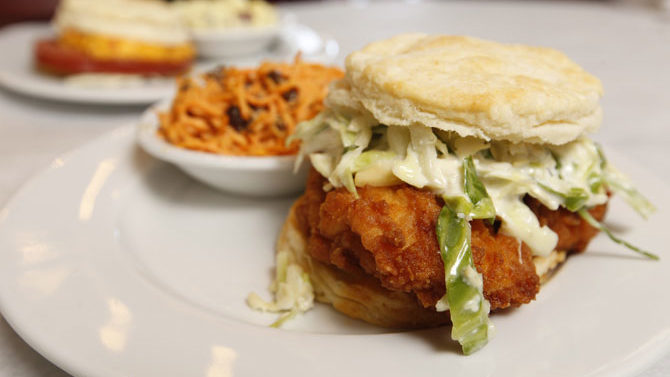 BAXTER IMPROVES: If you are a naturally skeptical person living in the South, you might tend to react to Paula Deen-style hyperbolic Southernness with a raised eyebrow. A new restaurant calling itself something like Mama Jewel’s Kitchen (1075 Baxter St., 706-850-9797) would not automatically be on your good side, evoking the sort of down-home nostalgia meant to cover laziness in the kitchen.

But your skepticism would be mostly wrong, because Mama Jewel’s is a perfectly pleasant and low-key place, not to mention a welcome addition to Baxter, where it has taken over the former Mirko Pasta, making it the fifth good to pretty-darn-good restaurant on the block between West Hancock and Collins. That’s not bad at all for a street that has a reputation for killing the dreams of would-be restaurant owners.

Mama Jewel’s is Southern, yes, but it’s not nearly as cutesy about it as the name suggests. The interior is clean and bright, with vases of fresh flowers, a few flat-screen TVs that don’t intrude too much and a big bookshelf one can browse. A high-top bar—just for eating; the restaurant doesn’t serve alcohol—looks out the window and is a nice place to eat solo.

There is food for ladies who lunch (salads, chicken salad) and food for ladies who are hungover (biscuit plates, hearty hot entrees). The chicken salad, which comes in three varieties—classic with hard-boiled eggs and pickle relish; mild pineapple and almond; and grape and blue cheese with pecans (the best)—isn’t anything to sing hallelujahs about, but it’s fine. The meatloaf is overpowered by its sweet, ketchup-y sauce. The egg, bacon and cheese sandwich is a good idea but needs a few more tweaks: slightly crisper bacon, so you don’t yank a whole slice out with your teeth; a sharper cheese; perhaps some hot sauce or spicy mustard. The grits need some zip, too.

Some things are excellent. The collard greens available as a side are maybe the best I’ve had in Athens outside of my mother-in-law’s kitchen. Cooked with ham, they retain just a touch of bitterness but haven’t been ruined with sugar or red pepper flakes or any of the other ridiculous things people add. They have a little bit of texture but not too much, they’re not wet, and they marry salt and vegetal flavors with beauty. The corned beef hash is another item not to miss, consisting of small cubes of the salt-cured fatty meat tossed in a frying pan with seasoned potatoes. It may seem like a weird item in a Southern restaurant, but it’s fine stuff.

The biscuits themselves make up a large portion of the menu, and if you split them rather than biting into them like a savage, their crusty exterior marries well with their softer interior. If you happen to order the peach cobbler (enthusiastically recommended by all three staff members behind the counter in unison), you may find yourself ignoring the cobbler, although it’s perfectly serviceable, in favor of the small cups of fresh cinnamon whipped cream that come with it. Dunk your biscuit in one of those and you will be happy.

TWINSIES: Speaking of names, Mother Pho (167 E. Broad St. 706-354-6006), which has taken over the former Yummy Pho downtown, may make you snicker when you hear the staff answer the phone. (Pho is pronounced “fuh.”) It is not tremendously different in most ways from its predecessor, but the quality has not diminished. The prices are a bit higher ($5.99 versus $4.75 for a banh mi), but the menu is somewhat expanded, for example with a bánh xèo, a rice-flour-based crepe filled with shrimp, sliced pork and bean sprouts. Grab a piece of lettuce, wrap it around a hunk of crepe and dunk it in the spicy nÆ°á»›c cháº¥m sauce.

The “Mother Fresh rolls” (grilled pork summer rolls, basically) are fat and tasty. The banh mi could use a little more pâté, and the jalapeños are kind of like playing roulette as far as their level of spice, but the pickled carrots and the other fillings are good and flavorful. Shaking Beef (cubes of beef quickly cooked with onions and a soy-based sauce) is tender but not hugely exciting. Better is the yellow curry, which is fairly spicy even at a 3 on the scale of 1–5 that customers use to indicate what level of heat they desire. Both come with jasmine rice.

The pho itself is slightly less fragrant than at Just Pho, over on Baxter Street, but if you doctor it up with the plate of peppers, herbs, limes and bean sprouts that comes on the side, there isn’t a huge difference. Mother Pho is open from 11 a.m.–9 p.m. every day and runs a slightly less tight ship when UGA is on break.