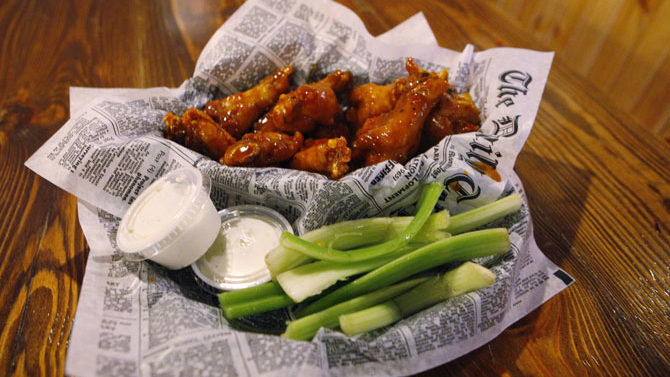 BLINDED BY THE LIGHT: One question to think about as downtown gets more well-heeled and longtime restaurants close is whether patina trumps survival. Blind Pig Tavern opted for the latter in its move last year from its location of 17 years on Baldwin Street, due to the fact that it was no longer guaranteed a long-term lease there. The original was dimly lit, with low ceilings, the walls papered with memorabilia. It had a certain style that didn’t quite translate to its franchised locations, which were better scrubbed. But moving on and up in life isn’t necessarily a bad thing, and although the new location, at 312 E. Washington St. downtown, is a little sparklier, it maintains at least some of the original’s charm.

The space has played host to a series of wings restaurants, none of which really seemed able to fill its cavernous rooms. Blind Pig is only using the downstairs, which is still plenty big enough for a ton of large, well-angled flat-screen TVs tuned to one ESPN or another, comfortable booths, tables and a big bar at the back. Some of the things that adorned the interior of the previous location have come along. It’s not so bad to be able to read the menu without squinting, yet the place doesn’t seem to have branded itself to annoying excess.

Perhaps not most importantly but not insignificantly, the food seems to have made the journey with little alteration. Blind Pig has always been well known for its burgers, which are available with a wide variety of toppings and are far better than at the average sports bar. The 5-ounce size, while probably rarely ordered, makes the excess of a Kroz, topped with bacon and your choice of cheese (including melty pimento as an option), seem lesser. The array of choices is large but not overwhelming and born out of a desire to please rather than to market. Vegetarians will still find plenty to eat, as will those who want to have their french fries topped with gravy (maybe a bridge too far as one reaches the end of an order).

Cheesesteaks can be ordered with chicken or a chopped veggie patty as well as with steak, and in variations including Greek (banana peppers and feta sauce) and Cyrus (chicken fingers). “Fat Tuesdays” feature a menu of very vaguely New Orleans fare that includes perhaps the best non-fried fish tacos in town, with a tastebud-slapping hot sauce and crunchy vegetables. The courthouse crowd appears to be supplying steady business from across the street, and the place is ready for signing day, per usual. It’s open for lunch and dinner every day, with a full bar.

ON THE ROAD: Should you find yourself in Jefferson, about 20 minutes from Athens, and looking for eats, your best bet is still The Savory Spoon. If you have made the trip with the goal of jumping on the world’s largest mattress, however, you might happen upon the nearby Iron Pig BBQ & Stew (121 Epps St., 706-254-5622). With a smoker out front shaped like a locomotive, an enclosed pit off to the side and a small building serving up orders from a window for take-out or limited outdoor-seating, it’s got atmosphere aplenty.

There’s no question the meat is smoked with wood, but it would be better if it didn’t come pre-sauced. The ribs (your best option) have a good flavor and texture under the sweet sauce, but the sugar interferes with the smoke. The brisket is OK but not vigorous enough in its seasoning. The pork is somewhere in the middle of the two, and the coleslaw (finely chopped, simple, not sweet) is a good addition to any of the above. There’s chicken, too, but it may not always be available. Iron Pig is open Wednesday through Saturday for lunch and dinner and, despite its humble venue, takes credit cards.

Not far away is Jefferson Pizza Kitchen (834 Gordon St., 706-367-7499), which makes pretty good New York-style pies in an unassuming strip mall location. A pool table, a jukebox and a Ms. Pac-Man machine provide something to distract your hungry children from the dessert case. Order at the counter, and your food is out fairly quickly.

The crust is thin, with little puff at the far end, the slices large and foldable, the tomato sauce reticent and the toppings solid. Ricotta on a white pie is milky and good. Meatballs come in thin slices. Nothing is too greasy, and there are lots of vegetables that can be added, neither raw nor cooked into oblivion. The “onion petals” that come with honey mustard sauce for dipping in a plastic basket are no doubt a prepackaged product but are a fine example of same. Jefferson Pizza Kitchen is open Monday through Saturday for lunch and dinner and has just added delivery as an option. It also has sandwiches, hot wings, calzones and salad, all well priced.

WHAT UP?: Yummy Pho has closed and has a sign promising it will reopen—as Mother Pho (no joke).