Mediterranean Grill Offers a Taste of the Greek Life 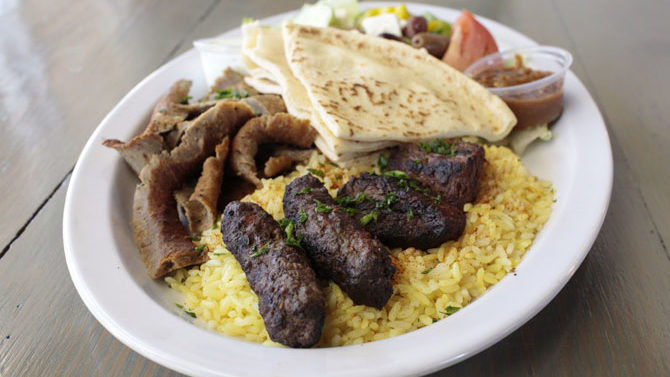 PITA PITA: It’s been a sore spot for years that in a town named Athens, we don’t have more in the way of eastern Mediterranean eats. The Sultan opened, closed and, thankfully, reopened on Baxter, where it seems to be making a go of it. A couple of franchises (Zoe’s, Taziki’s) concentrating on the food of the region moved in. None of that means the cuisine is overrepresented, so the coming of Atlanta’s Mediterranean Grill, a small chain with three locations (Decatur, Midtown Atlanta and Marietta) that just opened its fourth in Five Points (1591 S. Lumpkin St., 706-543-5000), is a good thing.

Mediterranean Grill may have siblings, but it doesn’t feel like a chain. At the same time, it runs smoothly, the menu is well crafted, and it feels like the people in charge know what they’re doing. That’s a nice balance to achieve. The offerings are somewhere between Greek and Lebanese, with an array of grilled meats, pita, lots of chickpeas and good vegetarian options. You probably will not receive your food within five minutes, unless all you order is a salad that requires no cooking, but you can see the kitchen staff at work in plain sight, and much of what they put together is cooked fresh to order.

Entrees run between $8.50–$12 and come with well-cooked rice, pita (not bad, a little floppy) and a side salad with a zingy dressing, as well as good and garlicky tzatziki, tahini sauce or a thin and surprisingly spicy hot sauce. If you want to try a lot of things, the vegetarian plate combines hummus, smoky baba ghanouj, tabbouleh (with herbs and vegetables better represented than the bulgur wheat that can sometimes make up too much of the dish), a couple of small but light and nice falafel patties and a side salad. Everything is flavorful, and the textures of the purees are thinner and smoother than the usual glop.

If you want meat, the gyros plate, with sliced and grilled mixed beef and lamb (tender, very tasty), is better than the kufta kabob (grilled meatballs, essentially, cooked a little too long and tough because of it). The spanakopita are marvelously buttery but not greasy. Most of this stuff, pastries aside, can be prepared as a sandwich if you prefer. Judging by the chicken kabob sandwich, which undersells itself as marinated chicken breast served in a heated pita but is far better than that simple description conveys, that section of the menu is well worth exploring. The Greek salad isn’t overstuffed with ingredients, but the chunks of feta are quality stuff. Various desserts (a couple of kinds of baklava, rice pudding, basbousa semolina cake) and sides (olives, feta) can round out a meal.

Mediterranean Grill is open for lunch and dinner and does not serve alcohol, although it does brew strong Turkish coffee and hot tea.

DISPATCH FROM ATLANTA: Having grown up in the shadow of the looming former Sears, Roebuck & Co. on Ponce de Leon, which operated as City Hall East for some years, stepping in the door of the new Ponce City Market is a weird experience. The building is as out of scale with its surroundings as ever, but the attempt to create an upscale mixed-use space (fancy apartments, food hall modeled after Pike Place Market in Seattle, expensive retail) seems potentially successful. On the other hand, go half a block and you’ll see that Ponce is still plenty seedy, despite the fact that it now includes a large Williams-Sonoma.

The food hall thing is becoming big business, and chefs like Sean Brock, Linton Hopkins, Anne Quatrano and Jonathan Waxman have opened casual eateries throughout Ponce City Market. Hugh Acheson has a nice little coffee bar, Spiller Park Coffee, in the middle of things, with beans from various roasters and several different kinds of toast. There’s a lot of bar-based or communal seating, which works for both the social and the antisocial. Waxman’s Brezza Cucina makes very nice pasta, including perfect gnocchi. Honeysuckle Gelato (Athenians may remember the food truck iteration) and King of Pops (“We also have grilled cheese,” they argued on a cold, rainy day) hide around a corner.

It all feels a bit calculated to extract dollars from your wallet—a new kind of mall—but it promotes urban density, and the concepts are high-quality. Could it work in Athens? The numbers both in terms of bodies and disposable income probably aren’t quite there, but the idea of giving over an otherwise unusable space to small entrepreneurs (more Plaza Fiesta than Ponce City Market) is intriguing.