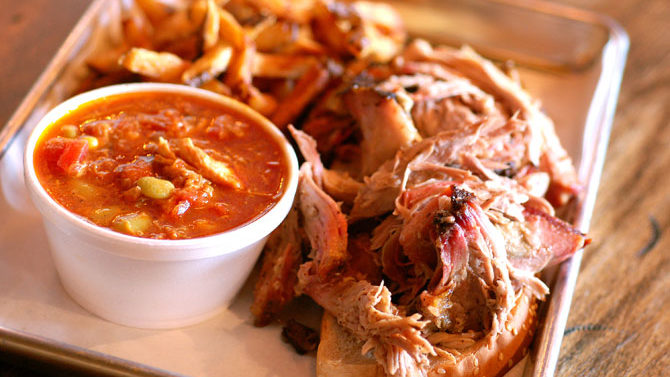 HERE: Bill’s Bar-B-Que, which recently reopened in Hull in the same location it had before but under new ownership (10010 Fortson Store Road, 706-549-4949), doesn’t seem to have changed much, which is exactly the way its patrons like it. The wood-grain Formica-topped tables are still there, and the counter and the vintage UGA football posters (which weren’t vintage when they first went up).

The menu is the same, too, full of prices like $2.30. It may take up a whole page, in fairly small font, but the basic ingredients are a short list, reconfigured into different combinations: hot dogs, hamburgers, barbecue pork, hash, hush puppies, chicken mull and a few other things I can’t imagine most folks order. (Are you low-carb? A plain hot dog will cost you only a dollar. Are you the opposite? You can get a whole loaf of bread for $3.)

The two main things Bill’s is known for are the hash and the mull. If you order a pork plate or a beef plate, which come with slaw and hash on the side standard, plus two slices of white bread, you may be a little disappointed, unless nostalgia takes precedence over BBQ purism. Sauced with the house stuff, which is nearly pure vinegar, it’s fine, but it’s not exciting. There’s no discernible smoke flavor, and the stuff just kind of sits there on the plate. So, why not ignore it and just go for the things that are better?

The slaw dog is good stuff: simple, straightforward, tasty and not so limp as many others. You can get a hash dog, too, topped with a generous ladle of the stuff and almost impossible to eat neatly. Hash, here, involves no potatoes. It is essentially a slightly thicker and simpler Brunswick stew, and Bill’s version is solid. It may remind you a little of your childhood cafeteria years, but in a positive light, and you can get it as a sandwich. The slaw is as stripped down and pure as everything else: cabbage, mayo, salt. Were it more elaborate (or, indeed, if anything were), it would stick out like a sore thumb.

The mull is a little thick and floury for my taste, and Bill’s doesn’t add the hot sauce ahead of time, preferring to leave Tabasco, Texas Pete and the hot BBQ sauce on the table so you can doctor it to your liking, but it also features the chicken in a way that other versions of the same do not. Oblong hush puppies, fried to order, are faintly sweet but weirdly comforting.

Bill’s is not trying to be anything more than what it is, which is part of its charm and, no doubt, its attraction. It also has little glass bottles of soda, pie by the slice, big ol’ cups of very sweet tea and atmosphere out the yin-yang. It’s open from 11 a.m.–9 p.m. Tuesday through Saturday, serves no booze and takes credit cards.

THERE: By contrast, Southern Soul Barbecue, in St. Simons (2020 Demere Road, 912-638-SOUL), is of the new generation of BBQ restaurants. It’s on Instagram. It sells well-designed T-shirts printed on ring-spun cotton. It serves craft beer. And it has cute touches of nostalgia, like Kool-Aid as a drink option, that are self-aware. It is media-friendly.

You would think that style would prevail over substance, but it doesn’t. The food is really good. If you park in the back, you’ll see several huge smokers, going full bore, and the aroma of pork wafts across the lot. The line to order is out the door, and most of the seating is outside, on a covered patio, at picnic tables. The sauce—and I almost never say this, because sauce is damn near irrelevant to BBQ as far as my druthers—is excellent, even the sweet-hot variety. Complex, appropriately spicy, definitely Georgia rather than Carolina, it could be used on anything on the menu and possibly improve it.

The pork is tasty (not phenomenal, but plenty good, even with no sauce), and the ribs are very well cooked but perhaps slightly aggressive in their rub. (It’s good, but it detracts from the meat underneath a little.) The Brunswick stew, as one should expect, considering Brunswick is the next town over, is a fine rendition, hitting the right middle ground between fresh ingredients and having been stewed all day. You can also get hoppin’ John as a side—an unusual choice, but one that’s somewhat fitting to the area. The combination of black-eyed peas and rice is accented with tomatoes and not cooked into mush. It even has a hint of citrus.

Southern Soul has regular specials that change daily, such as house-cured and -smoked pastrami, a jerk chicken burrito and pit-fired prime rib. It also has a Monday-through-Friday offering (the Weekday Worker, served until 3 p.m.) that gets you a BBQ sandwich, fries and a large fountain drink for $7. It does catering, take-out and delivery, has wine as well as beer, takes credit cards and is open every day from 11 a.m.–10 p.m.