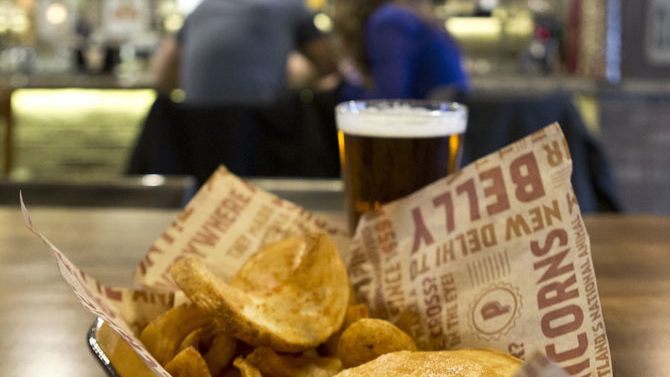 PIE ME: There are things about Pouch Savory World of Pies (151 E. Broad St., 706-395-6696) that would almost make one think it’s a franchise. The concept (world travel through pastry) is cute and well worked out. The menu is full of silly names for serious things. The branding is friendly and carried throughout everything.

Let’s hope we live in a world where such a fine idea indeed becomes widespread.

Dave and Jane Malcher and their daughter, Charmaine Enslin, have done a nice job with their menu of savory pies. The space, formerly Picante’s, has been renovated nicely, with shiny subway tile at the back, a long bar that pours draft beer and cocktails, tall tables along the walls and some slightly weird low tables with stools in the middle of the floor. Order and pay at the counter, and your pies will be out speedily, even when there’s a big crowd.

I’d like to say the veggie and fish pies are every bit as good as the meatier ones, but they’re not, and if you are an omnivore, you will fare better. This is not to say that the Mo’Rockin Veggie (vegetables, apricots, raisins, chickpeas, couscous) is bad. But it’s mushier in both flavor and texture than something like the Boykie (a South African-style pie with beef tenderloin in a pepper and red wine sauce).

The Pietanic (salmon, rice, mushrooms, lemon, dill, egg) is light and almost refreshing, but when tasted alongside the Mumpie (lamb in Indian curry), it kind of fades into the background. The Dinky Di (ground beef, gravy, tomato sauce) is a simple, hearty little meal, and the Hot Chick (chicken and chorizo in a white wine sauce) gets some serious zip from the piri-piri hot sauce it also incorporates, the same stuff that you can grab from a rack of condiments. It starts out like Texas Pete but ends up closer to habanero.

Some pies are oblong, some round; some arrive in little foil tins, and others eliminate the need for utensils. I haven’t figured out yet what determines the shape variations, but the less wet the pie, the more likely you are to be able to avoid the wooden forks (biodegradable but weird in the mouth) the restaurant uses. If you’re getting your order to go, each pie is packaged in a little paper pouch with a sticker identifying it.

A single pie is more of a late-night snack or a meal for someone who doesn’t eat very much, but two pies or a pie plus a side lets you try more, anyway. The mashed potatoes, with either gravy or whole-grain mustard and gravy, are a good option. The fries—thick, spiral-cut and excellent—are even better. The fish and chips, a non-pie special, is delicious and extremely well executed.

Are there sweet pies? Sometimes. A bourbon-chocolate-pecan pie, available with either real whipped cream or ice cream, is not too sweet and is more than a match for its savory counterparts.

The restaurant is open for lunch, dinner and late night, takes credit cards, has a full bar and takes recycling seriously, with a bin and instructions for compostable materials.

BRIGHT SPOT: The shopping center behind Trippi’s Cork and Bottle, at Lexington and Gaines School, is not highly trafficked, but it has contained gems in the past. Lighthouse Seafood Palace (50 Gaines School Rd., 706-850-1702), despite its weird name and unassuming atmosphere, is worth going out of your way for.

Half store, half eatery, it offers fresh seafood for sale and will steam anything for you in 20 minutes while you wait. The case of fish, etc. isn’t a large one, but the offerings are fresh and include items such as mullet and whole catfish. If you sit and keep your ears open, you may hear a discussion about mullet roe’s virtues. The place has two small tables, a TV and a whole heck of a lot of lighthouses but is perfectly hospitable, should you wish to eat there. More folks seem to get their food to go, and it survives the journey well.

This is no fried-fish shack. The proprietress turns up her nose at the idea. Instead, if you order a plate of tilapia and shrimp, you will get a large serving of the former and a smaller of the latter, served over white rice and seasoned with lemon pepper and plenty of butter. The low-country boil is far, far better than most versions of the same, with crab legs thrown into the mix, high-quality sausage, large and tasty shrimp, corn and potatoes. Instead of the ratio tilting toward the starches, the focus is very much on the proteins, which are cooked perfectly. It’s not exactly health food (more butter!), but it’s damn good.

Lighthouse Seafood is open from noon–8 p.m. Tuesday through Saturday, takes credit cards and EBT and sells cocktail sauce, batter, etc., if you want to cook your own fish.