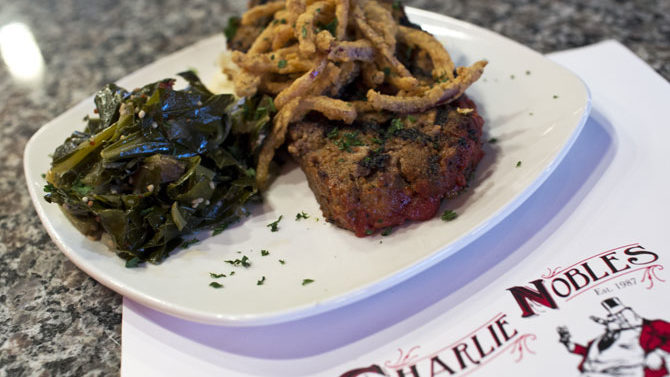 OLD SCHOOL: If there is one word that does not accurately describe Charlie Nobles (1040 Gaines School Rd., 706-850-3743), Reggie DiSante’s new restaurant in the Ansonborough development, it is “hip.” On the other hand, depending on what you’re looking for, “hip” can be overrated as an experience.

Named after a restaurant that DiSante’s mentor, George Davis, opened in Athens in the 1980s, Charlie Nobles focuses on Southern cuisine in a way that is neither greasy spoon nor nouveau. Instead, it’s probably an accurate re-creation of what you might have eaten in a nice restaurant in Athens some 30 years ago. That impression starts with the bread service, which has gone by the wayside in many restaurants as a way to cut costs. It’s not artisanal, but what you get is a small basket of warm, soft rolls that make you feel welcomed.

The staff, similarly, is well trained in the art of accommodation. Most servers who give you a bottle of cold water to refill your own glass nonetheless feel the need to stop by the table constantly to do it for you, which defeats the purpose. At Charlie Nobles, they know how to stay out of your way but also how to pick up on cues that their attention is needed.

Before the restaurant opened, DiSante emphasized that he was excited about the macaroni and cheese section of the menu, and the stuff is tasty. Available in four or five different configurations, it feels well composed as a side, with plenty of flavor. The same can’t be said for the deviled eggs, which arrive ice-cold and disappointingly bland, although with a nice assortment of Phickles pickles. The fried chicken livers with jalapeño tartar sauce are not particularly special, either, and the fried-okra salad is a regular salad (spring mix, tomatoes, sweetish vinaigrette) with some sliced fried okra incorporated; it sounds more exciting than it is.

Aim for hearty and warm, and you will be generally happy. The flank steak available at lunch is unremarkable, but the meatloaf (available either as a plate, with mashed potatoes and onion tanglers, or as a sandwich) is pretty tasty. Better yet is the Noble Burger, which earns its name. The bun is buttered, the toppings minimal and the patty cooked perfectly. If you are trying to watch your salt, steer clear, but if the presence of sodium makes you happy, the burger will put a smile on your face.

Much like at George’s Lowcountry Table, DiSante’s other restaurant, you will find white tablecloths and good cloth napkins at Charlie Nobles, amenities that should not be discounted. The restaurant is open for dinner Tuesday through Sunday, lunch Tuesday through Saturday and just added Sunday brunch. It has a full bar and plenty of parking, takes credit cards and does catering.

FAST FOOD: As the Epps Bridge/Oconee Connector area continues to expand, filling in with this chain and that, the food options over there are likewise multiplying. After all, if you don’t provide people with nourishment, they won’t keep shopping. Freddy’s Frozen Custard and Steakburgers (2050 Oconee Connector, 706-354-0671), a chain out of Wichita, KS, is the latest eatery to open, right next to McDonald’s, and with a somewhat complicated driveway situation (you can access it from the back via the Oconee Connector or the front via Epps Bridge Parkway, but exiting onto the latter requires a right).

Packed since it unlocked its doors and doing brisk business at both eat-in and drive-through, Freddy’s positions itself somewhat between Cook-Out down the road and Steak ‘n Shake, which it mimics in many ways, down to its evocation of nostalgia. (Freddy’s opened in 2002, however, and Steak ‘n Shake dates back to the 1930s.)

Freddy’s has a simpler menu than its competitors. For example, if you want a milkshake or its titular frozen dessert, you have two flavor options—vanilla and chocolate—although with lots of mix-ins and toppings. The custard in question is thick and rich, and should you get it as a milkshake, you will need a spoon. Even a “mini” serving size is plenty.

The price point is slightly higher than one would expect. You can, should you desire, get a grilled chicken sandwich or a veggie burger, but you will be most pleased if you stick to the two items in the restaurant’s name. The steakburgers (single, double, triple) are flat, crisp-edged and dressed without fuss (mustard, onion, pickles, usually cheese). You can eat one fairly neatly, although the butter-toasted bun may necessitate a napkin.

The patty melt, done on rye bread, is drier and not nearly as good. The hot dogs (regular, Chicago, chili cheese) are likewise nothing particularly special. The fries are shoestring-style and probably too thin. The onion rings are far too perfectly round, with none of the lumps and bumps of batter that characterize an excellent example. The chili cheese fries are neither gloriously healthy nor gloriously unhealthy.

In other words: Go with the basics. Freddy’s is open for lunch and dinner every day, takes credit cards and pours Pepsi products.