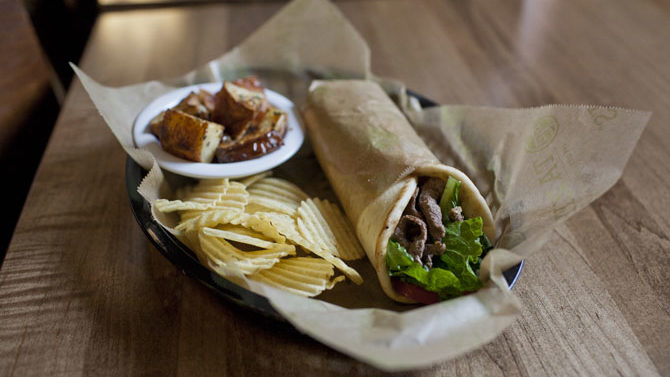 MED-CAS: The opening of Taziki’s Mediterranean Cafe (227 Prince Ave., 706-247-7619, tazikiscafe.com), a Birmingham, AL-based casual Greek/Mediterranean franchise, in the Bottleworks, has been met with excitement that could perhaps be described as disproportionate. I get regular emails complaining that all I cover for this column is franchises, Mexican restaurants and the like, and there are times when that characterization is accurate. Unfortunately, there’s a reason the same kinds of restaurants open over and over, and that reason is the market.

Taziki’s is not hugely innovative, but it is slightly different from the norm, which may explain the enthusiasm. Franchises also often have their acts together in a way local places do not, especially when the latter are owned by newcomers to the restaurant business. Things move along speedily at Taziki’s. The menu may not reflect that of an authentic Greek restaurant (no moussaka, no dolmeh, the presence of a spicy pimento cheese), but that is not what this place is, as you should have guessed from the name, a reworking of “tzatziki” that is easier to pronounce. What it is is a step up the ladder from Zoës Mediterranean Kitchen, sans drive-thru, with nicer environs featuring dark wood. You still order at the counter, and your food will arrive in impressively short time.

The Greek salad is solid and can totally make up an entree, even without an added protein (chicken, lamb, tilapia, chicken salad). The grilled tilapia sandwich is a good update on a simple fish classic, with plenty of caper-dill sauce, tomato and lettuce on a Kaiser bun that could probably be a little more substantial, to account for the sauce and the moistness of the fish.

Both the gyros and the other sandwiches come with chips and “your choice of a healthy side,” which could be well-cooked, herbed basmati, roasted new potatoes, a tomato-cucumber salad, fruit or, weirdly best of all, grilled vegetables. The same vegetables can be added to any of the dinner combos for four (order ahead by at least two hours), where they outshine the meat. The skordalia that comes with the chargrilled lamb is flavorful, but the lamb is just okay, but not especially tender or lamb-like. That probably isn’t seen as a deficiency by many customers, who may not favor the gamier, fattier taste of baby sheep.

Specials rotate daily, baklava and chocolate cake are pre-packed on the counter for impulse buys, and there’s a well constructed kids’ section of the menu without a chicken finger in sight. Taziki’s is open every day for lunch and dinner (closing at 9 p.m. except for Sundays, when it shuts down at 8), serves beer and wine, does take-out, takes credit cards and frequently has someone right outside its door hawking free samples, a smart move to win some converts.

TRANS-FERRED: Despite its closure for some months and reopening under new ownership as what is, technically, a franchised version of the original, the Westside Transmetropolitan (1550 Oglethorpe Ave., 706-549-5116) is nearly indistinguishable from the original in the same location. It has retained table service, which the downtown location has switched to as well and which isn’t always a move in the right direction. Sure, it allows you to add to your order later, but it also slows things down, not ideal in a pizza place, where the goal is usually to get in and out speedily.

The good news is that the pizza itself hasn’t changed. Everything from a basic pepperoni slice to the hefty vegetarian to a semi-weird but decently successful special of “chicken taco” (taco-seasoned chicken, lettuce, tomato, jalapeno, sour cream) is what the restaurant has always done and continues to do best: big, thin slices of pizza with a puffy, floury crust that isn’t so much New York-style as it is influenced by Fellini’s Pizza in Atlanta.

The oven-roasted red potatoes, especially a good bet if you are cold and starving, as they come out hot and almost immediately, continue to be tops among the sides. The meatballs (three large ones to an order, in a dish of marinara) are a close second. The focaccia has ever been too thick and bready, and it remains so, whether in a weird app of spinach artichoke spread that arrives ice-cold or when used to make panini, where it overwhelms good fillings. It works best for sopping up the house tomato sauce, especially in the pasta viola (penne, sausage, peppers, grilled onions, basil and plenty of garlic).

The rooftop patio and the big bar remain open, serving a few cocktails as well as beer and wine. Service is nice as pie but not particularly organized or on the ball. The simpler you keep it, the happier you’ll be all around. The restaurant is open for lunch and dinner daily, does take-out (perhaps a wise idea if you have an impatient family to feed), and takes credit cards.

WHAT UP?: Mirko Pasta on the Eastside has closed. Follow all the latest restaurant news on the Grub Notes blog.