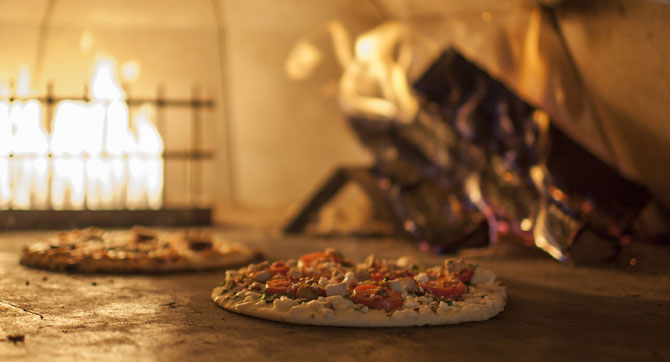 The garlic-parmesan breadsticks are much blander than one would expect; the honey mustard sauce that accompanies them has a bit of a kick, but the marinara is too mild and too sweet. In general, your best advice is the opposite of the case in most fine pizza restaurants: Pile on the toppings.

The more minimal offerings (margherita, with tomatoes and basil; plain mozzarella for the kids; artichokes, roasted red peppers and sun-dried tomatoes) tend to be under-flavored. The barbecue chicken, on the other hand, which features a sweetish sauce, smoked Gouda, red onion and cilantro, may not be exactly refined, but it does taste like something. The spicy shrimp doesn’t taste as much of sriracha as one would hope, but accents of goat cheese, sun-dried tomatoes, basil and red peppers make it fairly interesting.

There are many, many more choices, including a pizza made with pimento cheese, a wild mushroom, a Caribbean jerk chicken and a variety of other food trends. They range from $8.95 to $13.95, which means a meal isn’t exactly inexpensive, especially if you order a $2.25 soda. The house salad scatters pistachios and big, tasty croutons among its spring mix and goat cheese and is at least as good an option as the pizza.

There are also sandwiches, pastas, a s’mores pizza I was not brave enough to try, 24 beers on tap (some craft), some house sodas and lemonades that can be made alcoholic and cocktails that look like they would require an immediate trip to the dentist. Brixx is open for lunch, dinner and late-night eats/drinks every day, does takeout, takes credit cards and has a patio and a nice garage door that lets in fresh air.

BATTEN DOWN: Taqueria Tsunami, the Atlanta-based small chain of Latin-Asian casual fusion restaurants, is taking great advantage of being the only place to eat or drink in the new Epps Bridge Centre, which is gigantic and pedestrian-unfriendly. Located within hailing distance of the movie theater, it seems to be slammed with customers most of the time.

The problem with fusion is that it frequently screws up multiple culinary traditions instead of just one, and that can definitely be the case here. The weirdly named “empanada bites,” which are, in fact, much larger than most regular empanadas, are a decent exception, filled with Vietnamese-accented pork and served with a spicy ranch dip and salsa verde. The Asian nachos don’t work nearly as well. The idea (fried wonton strips instead of chips) isn’t bad, but the toppings are oddly mounded, meaning many naked bites. The queso is very thinly applied, and the jalapenos are present only in big chunks instead of adding heat throughout. The latter complaint applies equally to the jalapeno cheese tater tots available as a side.

Skip the “bowl” section (the “South of the Border bowl” is a sad, under-spiced affair no better than a TV dinner) and opt for the tacos, which are better priced ($3.50–$4 each, still a big jump over Taqueria del Sol, for example) and better executed. The Gringo Taco, which is straight-up Mexican (ground beef, queso, lettuce, pico de gallo) is better than the awkward marriages of the Pacific Rim taco (grilled chili-crusted mahi mahi, pico de gallo, hoisin lime aioli) and the Asada Zing taco (bulgogi, shiitakes, soy-sesame vinaigrette), which aim for nothing beyond mild heat and sweetness. The Baja taco (fried fish, Asian slaw, spicy mayo) is better but can’t hold a candle to TDS’s perfect rendition. The quesadillas are a decent option, perhaps better at mingling flavors than the tacos, but $8.50 is a bit steep.

Why eat here? You may be less disillusioned about fusion, or you may be in the area and desperate for sustenance. Taqueria Tsunami is open for lunch and dinner every day, has beer and wine plus a patio, takes credit cards and gives you a fortune cookie at the end of the meal.