New and New-ish: Troubadour and Speakeasy 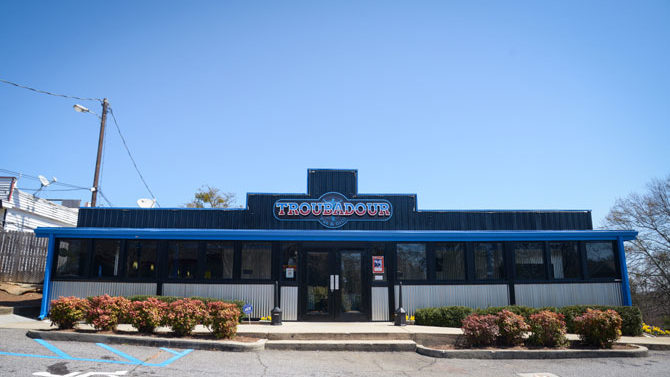 OTHERS’ SHOES: Any restaurant going into the former Locos on Harris Street would have had a tough row to hoe. The space holds many a memory for many a customer, complete with the old UGA scoreboard, which is still out back in the parking lot. Nor is Troubadour Pub & Grill, which has occupied the building since January, all that different from the former tenant: a focus on sports, with a lot of TVs scattered around the walls; a bar; occasional live music; a menu of basic pub food. Unfortunately, Troubadour doesn’t seem to be attracting the same kind of crowds as its predecessor, and although the people who run it are super nice and care about customer service, an empty restaurant can be a self-perpetuating problem.

The food is more than adequate for its ambitions. The spinach dip isn’t all that great, but neither is it unacceptable, with bits of artichoke hiding out. The wings don’t come in the Baskin-Robbins array of flavors they do at some other similar restaurants, but five choices (Troubadour style, which means with a kind of sweet/hot/sour sauce; “criminally insane hot”; mild; lemon-pepper; BBQ) should be plenty, and they’re cooked to order. If you order the cheeseburger cooked medium, it will arrive actually so, with a hint of pink through the middle, even though it’s a fairly thin patty. The bun is toasted on the griddle, and the result is decently tasty.

The entrees may seem a little weird, but they’re also fairly well executed. The spaghetti and “lotsa meatballs” is a far cry from La Dolce Vita, but the pasta is fairly high-quality stuff and hasn’t been cooked to death. “Doug’s Almost Famous Half Fried Chicken” is just what it sounds like: a chicken that has been whacked in half and fried. At $9.99 including two sides, you could probably split it with a friend and have both your stomach and your wallet fairly full. The macaroni and cheese is cheesy and rich, and the housemade “tater chips” come with a wasabi-based dipping sauce that is addictive (I recommend dunking the chicken in it).

Why, then, is the place so quiet? It may have something to do with the name, which doesn’t suggest anything very strongly; there’s an American Idol-type silhouette of a man holding a microphone on the sign, but the place hasn’t developed much of an identity yet for its music. It doesn’t sell itself as a sports bar from the exterior, and students seem unaware it exists. Troubadour may not be super exciting, but it fills a void in the area and its prices are good. It’s open every day for lunch and dinner, has a full bar, does take-out and takes credit cards.

REVISIT: I hadn’t been to Speakeasy (269 E. Broad St., upstairs from what was Little Bull) since I went when it opened, about 12 years ago, but a new-ish chef (Brian Head, who started in November) and a new-ish menu prompted a revisit recently. The dining room is as pleasant as ever, with solid service and lovely views of North Campus out the second-story windows.

The menu is more of an up-and-down affair. On the down end of things, the barbecue duck with Grafton cheddar grits and collards is a sad, flavorless affair, almost unrecognizable as duck, drenched in barbecue sauce and accompanied by grits and greens almost unkissed by salt. The braised pork belly is likewise a disappointment, its meatier parts with the texture of corned beef, perhaps because some of the fat has been trimmed off. If you have to get mac and cheese at one of these two restaurants, opt for Troubadour.

The crab cakes are better, although paired with undercooked black-eyed peas (there is al dente and then there is nearly crunchy), and the house-cured salmon is nice, especially its accompaniment of well-pickled red onion. The truffle fries are actually fairly tasty, although the aioli that comes with them for dunking refuses to adhere to a fry, slipping back into the ramekin as though afraid to be eaten.

The fried pickles, however, are delicious, probably the best example of the Southern classic in the Athens area. Head creates his own pickles in-house, slices them thickly, dunks them in a well seasoned cornmeal batter and fries them perfectly, serving them with a lemon-dill dipping sauce. There’s a lovely balance between the faint sweetness of the pickling spices (some clove), the crunch of the batter and the citrus of the sauce. Should you have nothing else at the restaurant, those pickles are worth a trip. Heck, get two orders and forget about a balanced meal.

The prices remain low for a nice evening out, with most small plates running $6–$9, and two or three providing a serviceable meal. I may very well have been unlucky in my choices, although the sweet waiter did recommend several of them. Speakeasy is open for dinner nightly, has a full bar (with a list of specialty cocktails), takes credit cards and even validates parking in the downtown decks (College and Washington).