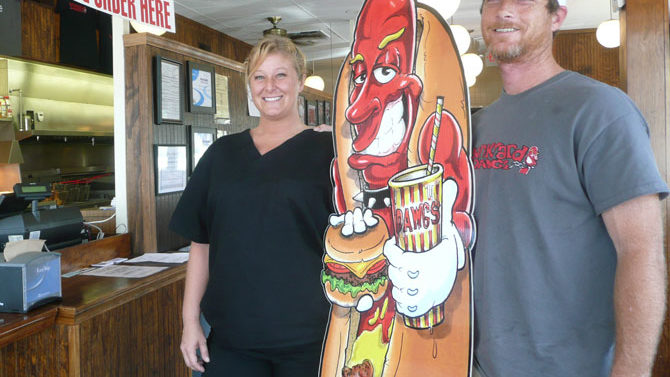 TAILGATING, PART 1: Football season is upon us, which means thousands of extra people in town who need something to eat while they’re here. Some of them cook. Some of them stop at Stripling’s on the way in (a good move to pick up some quality grillin’ ingredients). Some of them go downtown. But there are a couple of new places in town that are aiming their sights on that market.

Junkyard Dawgs (1815 Old Commerce Rd., 706-583-9124) takes its name from a phrase Erk Russell coined to motivate the Georgia defense in the mid-1970s. Located in what was once a Huddle House, its decor hasn’t changed greatly from the original business there. The same globe lights hang from the ceiling, and the interior would best be described as spartan. Wood paneling, some UGA-themed art and photographs of St. Vince and Mark Richt make up the decorations.

The menu, as indicated by the giant sign painted by Dave Helwig, concentrates on hot dogs. The dogs themselves are reminiscent of the ones at the Varsity: long, skinny, beefy and topped, in the standard iteration, with yellow mustard and a fine-ground, mild chili. Slaw, hot chili, cheese and more are available as other topping options. The basic combos come with “home fries,” i.e., french fries, thin cut, with much of the potato skin left on, and a Coke. Should you prefer something flatter, the hamburgers are in the vein of Five Guys, with a bunch of toppings on a thin patty jammed into a soft bun wrapped in tinfoil.

The best thing the restaurant offers are its meat skins, or pork rinds, in two different bag sizes, both large and well priced. Puffy and big, with better texture than the store-bought variety, and picked through to eliminate tougher bits of skin, they’re worth the short drive out there. Junkyard Dawgs also makes a BLT on a hot bun and is, on the whole, similar to Gunter’s, which operated in Lawrenceville to a similar audience for years.

The restaurant has super-cheap specials after 3 p.m., does drive-through pick-up for advance orders and is open 11 a.m. to 8 p.m. Tuesday through Friday, 10 a.m. to 8 p.m. Saturday. It takes credit cards and doesn’t serve alcohol.

TAILGATING, PART 2: Athens’ other newest entry trying to separate football fans from their money is Wingspan (706-424-9511), a trailer from the folks behind Blazer’s in Hull that sets up on Chase Street, behind Twice the Ice, in the location where Uncle Jerry’s once was. Its menu is small yet surprisingly big considering the limited kitchen: hot wings, chicken strips, burgers, fish sandwiches, fried fish, french fries, corn dogs, onion rings, slaw, fried pickles, cheese sticks, fried apple pies, cups of ice cream and sodas.

You may have noticed the word “fried” a lot in that list. In no way is Wingspan a healthy option. Nor is there much, like at Junkyard Dawgs, for vegetarians to order. The wings are on the saucy side but cooked hot to order. The fries are big and steak-cut, well fried on the spot. The burgers are firmly packed (maybe a little too firmly), and the griddle brings out a nice crust on them. The ice cream comes with a flimsy plastic spoon that doesn’t work as well as a small wooden paddle would. The atmosphere is minimal, with no tables or seating options apart from the concrete steps leading up to the building at the back of the lot, but the folks who run the place are super friendly and cook fast. They also take credit cards with the Square attachment.

Wingspan is open Wednesday through Saturday from 11 a.m. to 8 p.m. and does large take-out orders placed in advance.

WHAT UP?: Pulaski Heights BBQ has had a Reuben on its menu a long time, but a friend recently sold me on its Redneck Reuben, which is a somewhat regular special. Consisting of house-smoked thick-cut bacon, pimento cheese, fantastic collard greens and house-made ranch dressing on Texas toast, it makes the regular Reuben feel like health food in comparison. It’s also one of the best sandwiches in town, worth the calories and the effort to eat the thing. I recommend splitting one with a friend to keep yourself from requiring a nap. Independent Baking Co. is open in Five Points. Broad Street Coffee has closed in preparation for its move to the former Farm 255 space on W. Washington, where it will be renamed Echo. Grindhouse Killer Burgers, in a new two-story space on Lumpkin, is hiring and plans to open in September. Judy Johnston of Normaltown Cafe, newly opened in Danielsville, had originally planned to open Stellar in the former Floyd’s space in Watkinsville, but that is no longer in the works. Brixx: Wood Fired Pizza, a franchise out of Charlotte, is opening three Georgia locations, including one in the West Washington Street parking deck.