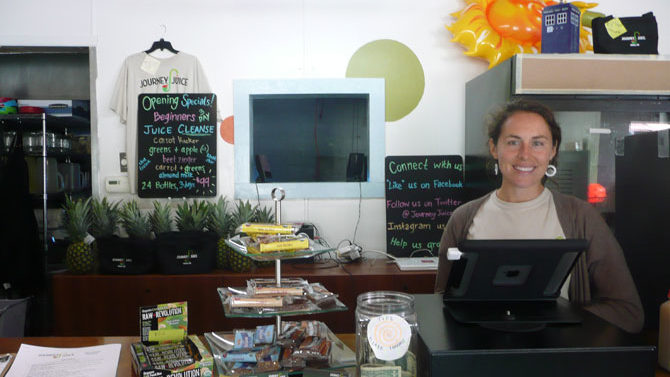 JUICED: Although your humble food columnist is an omnivore, I do occasionally get tired of forcing myself to consume tater tots topped with cheese and whatnot. In such situations, it’s nice to have healthier options to turn to, and the new Journey Juice (1428 Prince Ave., at Satula, 706-850-0707) is a fine supplier of them. The interior of a space that has been, variously, Honey B’s, Dona Rosy’s bakery and Pollo Loco, has been scrubbed within an inch of its life. Often somewhat dark and depressing, it now promises healthful living through raw foods.

Scientific American reported in 2009 that some vegetables (tomatoes, carrots, spinach) actually increase in some nutrients when boiled or steamed, and the race to even colder-pressed juices that the New York Times covered recently seems like a marketing tool more than a genuine guarantee of a better product. All that said, the organic cold-pressed juices Journey Juice is producing are truly delicious. They better be, at an average of $6 to $7 a bottle, but juice seems to be the next fro-yo, judging from the number of shops opening around the country. When you consider that a bottle contains 2 to 3 pounds of organic produce, it seems like a better deal.

The folks behind the counter are happy to educate the newbie, making sure to point out that their product is unpasteurized, meaning you need to refrigerate it within three hours of taking it from the refrigerated case. To be clear, Journey Juice isn’t a juice-to-order business. It’s a shop with a juicing facility in the back, which actually makes for a better, more consistent and tastier product. Being served a glass of warmish, fresh-juiced veggies is often, let’s be honest, kind of gross, but the same thing, pressed within an inch of its life to create a translucent, non-pulpy liquid and refrigerated, is far more appealing.

All the juices are well balanced. The Just Greens (celery, cucumber, kale, parsley, romaine, spinach and lemons) is refreshing and pleasant. The Tomatoville (tomato, bell pepper, carrot, cayenne, celery, cilantro, spinach, lemon and sea salt) is like a perfect gazpacho, and I couldn’t help wondering what kind of a Bloody Mary it would make. The Beet Zinger (beet, apple, ginger and lemon) is awesome, one that could sell even the penny pincher on a pricey bottle of juice. Nothing is too sweet, but nothing is so purist as to make you feel like you’re drinking vegetables. It all deserves a hat tip.

The store is open from 7 a.m. to 8 p.m. and takes credit cards, plus operates a booth at Athens Farmers Market Saturday mornings.

BAKED: Two other options for eating better are Jennie Phillips De la Vega’s Mama Bird’s Granola (due to open a brick-and-mortar location at 332 Glenn Carrie Rd., in Hull, in August) and Beth’s Bakery (delivery only, out of Winterville, at getyournoshon.com), a vegan and nut-free bakery run by Beth Carey.

You can get Mama Bird’s product from their website, at numerous farmers markets (Athens, Oconee, etc.), at Daily Groceries and soon at Earth Fare. Most ingredients are organic and local, sans milk and soy products and gluten-free, plus the whole bag can be made vegan through substituting agave nectar for the local honey used as a sweetener. Should you desire insect protein incorporated, Mama Bird’s will do that too.

The Orange-Vanilla is a little heavy on the citrus zest, with minimal vanilla flavoring; the Apricot Joy is a bit wet but nicely flavored (De la Vega suggests crisping up the granola in the oven); and the Apple Bliss is good enough to eat an entire bag straight up, with peanut butter and sea salt combining with the rest to create delicious crunchy nuggets of snackitude.

Beth’s Bakery is licensed as a cottage food establishment, which means Carey is not allowed to sell to places like Daily but can retail through Athens Locally Grown. She also has a booth at the Comer and Oconee farmers markets. Mostly, you have to order her baked goods in larger quantities, which can make it impractical for individuals without an event planned or an office to feed, but she does smaller orders on Fridays for her noshers club.

I wasn’t very impressed with the cupcakes (too moist, and the flavors didn’t come together), but the biscuits were a decent surprise, with a vegan butter substitute that mimicked the real thing fairly well. The scones are a bit soft, but the chocolate snickerdoodles with cinnamon and sugar have a nice, chewy texture.

Beth’s also does muffins and banana chocolate chip bread. The website is a wealth of information, including extensive detail on which of her ingredients are both organic and non-GMO, and the process of ordering and delivery is very smooth.

WHAT UP?: Zoe’s Kitchen opens Thursday, Aug. 1, on Alps Road. Rustica in Normaltown is closed, to become a bar and restaurant called Hi-Lo. Grilled Teriyaki downtown will become Little Bull, a Puerto-Rican restaurant. Junkyard Dawgs, a hot doggery, is open on Commerce Road. Silver Lining Cupcake Co. on Baxter is closed. Broad Street Coffee will move to the ex-Farm 255 space beginning in August and change its name to Echo. Read more about all these developments as they, well, develop, on the Grub Notes blog.