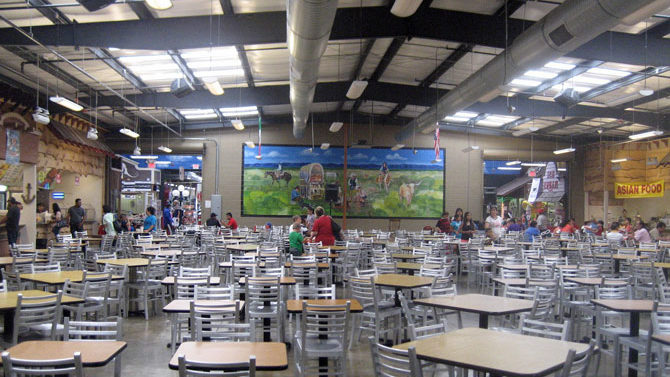 ROAD TRIP: If you take I-85 out of Athens to Atlanta on a semi-regular basis, you’ve probably thought to yourself a bunch of times, “I really should stop and check out the Pendergrass Flea Market” (5641 U.S. Highway 129 N), as you see the billboards featuring a large black-and-white cow. I know I have. But I’ve always been in a hurry to get somewhere else, and despite my love of digging through trash to find treasure (my family brakes for anything that might even appear to be a yard sale), I never bothered to turn off the main drag and investigate.

Until, that is, I got two emails in the space of a few weeks touting the food options there. One was from Jay Braver, the market’s Internet presence manager, but the other was just a happy and enthusiastic tip. They were both right. The Pend Flea is well worth the amount of gas to get there, a great place to take your kids, a fun excursion and a source for some quality grub.

It’s the rare flea market that doesn’t tout itself as the state’s biggest in some aspect or another, but this one is indeed impressively large, not to mention both indoors and air-conditioned, which gives it a big boost. Aisles are labeled with street names (4th Avenue, Main Street, etc.), lest you lose your way, and areas outside the big building retail produce for ridiculously low prices ($6 for a large box of bananas, $1 for 10 limes). The comprehensive website lists amenities, including many of the food vendors, so you can try to plan out your trip in advance.

It’s also easy to arrive early, with an empty stomach, and browse to figure out what you want to eat. The largest concentration of food options is on the food court, a cavernous space with a large mural on one wall and a small arcade at the other end that includes a slide (free entertainment!). Head down Main Street until you see the signs directing you to the right. Jugos del Rio does fresh juices as well as grilled Mexican food, and although I didn’t try the latter, a jugo rojo made with fresh beets and carrots was refreshing, if maybe a little expensive at $4.

Braver’s email had particularly piqued my interest with his focus on a taco de cabeza, made with head and cheek meat, offered at the Pura Enchilada Taqueria. The idea was exciting, and the meat was appropriately gelatinous and interesting, but the tacos themselves were a little blah. When the highlight is the onions and cilantro you offer at your fixin’s station, you’re not entirely on the right track. The lengua is chopped in chunks rather than shredded, and the three sauces are nothing to write home about. I should have followed the crowd to Altamar, directly across from Pura Enchilada, which seems to focus on goat and had major lines.

Panda Place/Asian Panda does not have a promising name and indeed offers the kind of mall Chinese food that shames a proud culinary tradition, but it also makes really tasty and fresh pho ($6.41 including tax) and an array of bubble teas. Pupuseria El Salvador, right next door, should not be overlooked. Its pupusas may be priced at $2 (a touch above average), but the griddled corn cakes stuffed with beans, cheese, pork, loroco and more are awesome, with bits of the filling leaking out at the edges and caramelized by high heat. Warning: both the green sauce and the cortido (pickled cabbage) are extremely spicy.

Outside, down 5th Avenue East, you’ll find more produce; Ramiro’s Coconut Stand, with fresh coconuts and macaroons; and a fellow with a grill making elote, the Mexican street snack that consists of grilled corn on a stick, rolled in mayonnaise and cheese then dosed heavily with chili powder. It’s hotter temperature-wise than in terms of spice, and I prefer it when the corn is a bit charred, but it’s a tasty option. Don’t miss the coffee shop/bakery about halfway down Main Street that doesn’t appear to have a name. A sandwich cookie with two chocolate chip rounds contained fresh whipped cream in the middle, and the cookies themselves were crisp and buttery.

Other things you can get at the Pend Flea include: roasted nuts (both sugared and spicy), a Confederate flag bikini, designer jeans, Mexican pastries, large appliances, framed artwork, multipacks of underwear featuring Dora the Explorer, both Mexican (tamarind, spicy) and American candy, haircuts, waxing of various kinds and lots of plastic junk. In addition to the food court arcade, there are carnival games, a bounce house where you get 10 minutes for a dollar, a cow-milking game, large inflatable plastic balls that float on water and can contain a small human, live music, paintball and, although I didn’t find it, a petting zoo.

The Pendergrass Flea Market is open Saturday and Sunday from 9 a.m. to 6 p.m. Parking is copious, and most vendors take cash only, although a few accept credit cards.