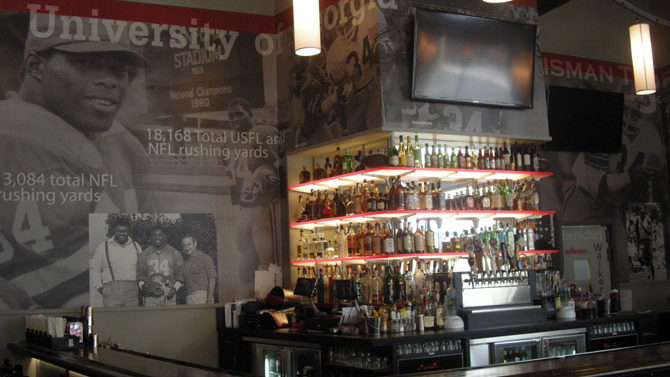 Living Legend: When the news broke that Herschel Walker was going to take over the space most recently home to Chango’s/Doc Chey’s and once part of a gracious department store in downtown Athens, you couldn’t help but be a little excited, even if you have no great love for college football or chicken products, the two arenas in which Walker has made his name. Herschel’s Famous 34 Pub & Grill (320 E. Clayton St.) has the feel of an imminent franchise, even down to the phone number, which ends in the two digits the man forever made his own on the field.

The room feels different from the way it did under the previous tenant, not least due to a large bar built out from the back wall, but it still dwarfs almost anything you could put in it. The ceilings are some of, if not the, tallest in town, with windows that stretch up to the trees in lovely glass arches. Vinyl graphics of Walker in action, rendered in black and white, with statistics and text overlaid, adorn the walls, an innovative approach to making the restaurant feel more dynamic.

The menu seems to be trying to be all things to all people, except veggie types, who will have to look a lot harder to find something to eat. Eight pages long, it includes sections for appetizers, soups and salads, sides, sandwiches, omelets, entrees, burgers, nonalcoholic beverages (in case you were wondering, yes, you can get a chai tea) and “little bulldogs.” If you want wings, available in 34 flavors, you’ll have to locate the flip chart on your table, which also includes desserts and drink specials. It’s all a bit overwhelming, and even two visits will barely scratch the surface of what the restaurant has to offer. What’s good and what’s not is unpredictable.

The wings aren’t particularly impressive, even in a simple “medium” hot iteration. Smallish, not very crisp, and not inexpensive, they arrive with a few matchsticks of celery and carrot. The pork nachos, red and black tortilla chips that come topped with BBQ pork, black beans, “pepper jack cream sauce” rather than actual cheese and a super-oniony salsa, aren’t worth the calories.

The Doritos Salad seems like it should be an ingenious variation on a taco salad, but ends up a sad pile of iceberg with a few whole nacho Doritos around the edges and a few more crumbled on top, plus more of the same inferior salsa. On the other hand, the turkey club may not be innovative, but it is well executed and an excellent value. It costs $8, but the sandwich is an enormous double-decker on hearty, well-toasted multigrain bread, plus a giant side of kettle chips that come with roasted garlic mayo on the side (avoid it if you’re not big on alliums or if you don’t have Altoids handy).

The “Dawg” burger comes topped with crabmeat, salsa and that pepper Jack cream sauce, a much better use of the latter two items, and seems overambitious but, in fact, ends up rather nicely put together. The fact that it arrives in a tiny, deep plastic basket, while the sandwich comes on a giant flat white plate, seems a little bizarre, but the patty has good browned bits around the edges. Some of the Old Bay fries have been coated too liberally with the seasoning mix, but most of them are fine.

Televisions abound, each tuned to a different ESPN channel, and if you’re feeling brave, “Herschel’s Mama’s Chicken” features “banana cream-dipped French toast” and Crown Royal maple syrup. The restaurant is open for lunch and dinner every day plus late-night kitchen hours, has a full bar, takes credit cards and sells merchandise. It also has some kind of special for every day of the week.

Living Legend #2: Glenda Brown may not be Herschel Walker, but she has her own name recognition in this town. When she closed her restaurant Peaches, there was much mourning. Thankfully, she’s now cooking at The Camp (2467 Jefferson Rd., in Homewood Hills), and the restaurant is much better for it. Its original emphasis on a healthier version of soul food was admirable, but it’s the rare cook who can make grease-and-salt-free Southern dishes taste as good as the ones that will shorten your life. Brown isn’t out to save you. She just makes damn tasty food.

The restaurant is significantly busier than it had been, which makes its spartan atmosphere less depressing. Just as at Peaches, friendly folks will take your drink order and help you with anything you need, calling you “honey” the whole time. The catfish on Fridays is particularly good: light, crisp, moist on the inside, not greasy. It even bests the fried chicken, which is saying something. The coleslaw that comes as a side with the fish is wet and mayonnaisey, plus a little sweet, and it still manages to be tasty. The cafeteria line moves smoothly and swiftly, and neon-colored slices of cake plastic-wrapped on plates in individual portions tempt. The restaurant is closed Monday and Saturday and open Tuesday, Wednesday and Sunday (11 a.m.–3 p.m.), Thursday (11 a.m.–7 p.m. ) and Friday (11 a.m.–8 p.m.).