Our Favorite Beers From the Classic City Brew Fest 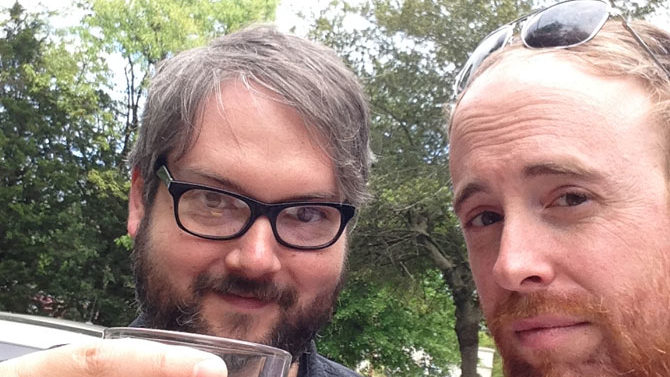 Little-known fact: Hops—the flower buds that both preserve beer and impart flavors from pine to pineapple—are a relative of the marijuana plant. So that’s another reason to include beer reviews in Flagpole’s “weed issue,” other than the obvious intoxicating effects.

Feeling we could blend in, Flagpole sent its two resident bearded staffers, City Editor Blake Aued and ad rep Carey McLaughlin, to join hundreds of our fellow beer nerds last week at the 21st annual Classic City Brew Fest, where we were able to sample a few dozen (often extremely strong) brews and live to tell the tale. Here are some of our favorites:

Creature Comforts King’s Ransom: At 10.2% ABV, this collaboration with Brooklyn’s Other Half brewery has a king’s ransom worth of booze, that’s for sure. You’ll #feelthebern when drinking this Baltic porter—brewed with the lager yeast used in Creature Comforts’ pilsner, Bibo—but coffee and smoke come through, too. Plus, now you know something good came out of Scandinavia other than democratic socialism. It’s available in cans, so pick some up and save it for next winter. [BA]

Strangeways Brewery Woodbooger Belgian Style Brown Ale: Part of this Richmond, VA brewery’s “Nucleus Series” of flagship beers, Woodbooger pulls rich caramel and vanilla notes with a relatively light finish and a touch of Belgian character and malt making this one of the more interesting brown ales I’ve tasted. According to Urban Dictionary, which we know to be a rock-solid source of information, Woodbooger is yet another moniker for the mysterious Yeti. Honestly, it seems mildly derogatory towards the mythical creatures, but considering there were as many Yeti-sized beards in the upstairs galleria as I’ve ever seen in one place, I figured it was prudent not to inquire further. [CM]

Rogue 8 Hop IPA: Confronted with Rogue’s numerical hop series 4, 6, 7 and 8 Hop IPA, I figured 8 (a robust 8.8% that utilizes all of Rogue’s homegrown hops) would be a punch to the face. So of course after 30 or so tastes of beer, I went for it. Yes, the hops are monstrous, but they’re flavorful. Everything just works with this one. In fact, going backward and tasting the far less intense 4 Hop IPA proved to be relatively pedestrian. 8 Hop’s got all the goods a hop lover could want: citrus, fresh herbs, hints of pine and an intense but expertly balanced sip. [CM]

Deschutes Mirror Mirror: What kind of beer is this, even? No one seemed to know, but everyone I talked to agreed it’s delicious. (For the record, it’s a barleywine aged in red wine barrels, but it also tastes like a Scotch ale but hoppier, and there’s some bourbon flavor in there, too.) Sadly, you can’t get Deschutes in Georgia right now, but the Oregon-based company is opening a second brewery in Virginia in 2021. [BA]

Southern Brewing Co. West Side Pale Ale: This new pale ale from Athens’ newest brewery is their best yet, mostly due to a pleasant body and long sip, boasting some citrus on the finish in classic, now ubiquitous West Coast style. Striking the perfect balance between outrageous and boring, WSPA proves that sometimes, subtlety can taste just as fresh. [CM]

Terrapin Anniversary Ale: Terrapin is known for getting insane in the membrane with the hops, but this is like nothing you’ve had from the Athens brewery before—an amber-colored sour brewed with Belgian yeast, coriander, orange peel and chamomile that’s just bitter enough to be balanced. [BA]

Wrecking Bar Victor IPA: I had a version infused with grapefruit and cedar. One of my favorite IPAs is Ballast Point Grapefruit Sculpin, and this blew it out of the water. It’s always worth stopping by the Wrecking Bar brewpub in Little Five Points whenever you’re in Atlanta, and Trappeze often has something of theirs on tap, too. Almost everything they make is terrific. [BA]

JailHouse Conjugal Visit: By the time I reached Hampton, GA’s JailHouse Brewery, the taste of hops burning through my tongue, I was ready for something slightly different. This American Red/Amber Ale combines medium bitterness with hints of caramel and honey and a welcome touch of mint and herbal goodness. I was so spent by the time I finished my taste, it was up to the prison guards to escort me back to the outside world. [CM]