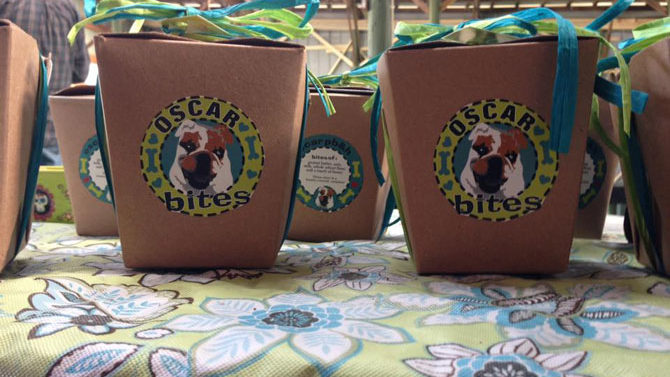 Taylor also has a love of animals—as evidenced by the pitter-patter of dog feet that greet you when you ring her doorbell—and baking. Put all those factors together and you can see how they add up to Oscar Bites, her side business, which retails healthy dog treats around the Athens area.

Taylor explains that she didn’t want to spend all her time baking for herself. Her pets in 2009—Oscar (a bulldog), Myrtle (an “Athens black dog”) and Millie (a pig), all R.I.P.—begged constantly for some of whatever she was making, but she knew that the butter and sugar in her baked goods wasn’t healthy for them to eat. So she tweaked her recipes and, seven years later, her business continues to expand. She sells on weekends at farmers markets (Comer and Athens, in season), through Athens Locally Grown, at Pawtropolis (which also puts them in gift bags), at various craft shows, on Etsy, through her website and even at a few places in Atlanta.

Asked how many Oscar Bites she’s made in her life, Taylor doesn’t know how to estimate, but she’s mixed, rolled, cut, baked and packaged every single one herself. Her sturdy KitchenAid mixer has held up for batch after batch after batch. Since she got a job at UGA—she’s an advisor in the physics department—and stopped working nights in the service industry, she’s had more time to bake, and she uses most of her free time to keep up with demand.

What do they taste like? I couldn’t help myself. I remembered trying to eat Milk-Bones as a child, and I had to know. Oscar Bites are a lot better than that, but they’re still pretty bland. Taylor says dogs can only have so many ingredients, and she doesn’t use preservatives at all, which limits both their shelf life—most flavors are good for about two months but can be frozen—and what she can include in the treats.

Peanut butter, honey and oats, as well as human-grade whole-wheat flour and milk, are pretty standard. Blanche’s Banana Bites, named after another much-loved pet, who died in March, are gluten-free because they use brown-rice flour instead of whole wheat. Cinnamon makes an appearance as a flavoring from time to time, as do apple and pumpkin, both of which are healthy for canines. What Taylor has on offer varies with the season and the venue. Some flavors do better than others in the heat of summer.

The “Pudgy Balls” are Taylor’s most popular flavor, made with carob chips (safe for dogs, unlike chocolate) as well as peanut butter, honey, oats and cinnamon. She says most dogs aren’t that picky about which flavors they prefer, but there are exceptions. She thinks the Pudgy Balls attract their attention because of the variety of aromas—due to the spices they include—more than because of their flavor.

When she can afford to, Taylor uses local ingredients, getting her eggs from Knick Knack Farm in Colbert and her honey from Beehaven Apiary in Madison County. She doesn’t usually opt for organic components for the same reason she can’t go all-local. It’s not that making a profit is the most important thing to Taylor. Instead, it’s that she donates 10 percent of her gross sales to Athens Canine Rescue. “This is my way of being able to give more,” she says. That is, Oscar Bites basically allows her to give as much as she can to the rescue cause, and she doesn’t want anything taking away from that.

In terms of coming up with new flavors, Taylor tinkers. Sometimes she invents a new treat that tastes good, but the shelf life is too short to make it viable, as with a treat involving turkey bacon. She still makes blueberry treats, but they have a similar problem. Her packaging also requires some tweaking from time to time, to keep the treats fresh, to withstand grease and to attract the eye. Taylor says Oscar Bites are popular as hostess gifts because they’re something different from the usual, and the cute boxes and bags help her product stand out, even if sometimes the treats take longer to package than to bake.

Taylor also makes dog-friendly cakes and cupcakes on demand, in peanut butter and banana, with cream cheese frosting, for special dog occasions. Which begs the question: Is there anything she eats of what she makes? Taylor admits that the Kennel Corn (air-popped popcorn seasoned with honey and Parmesan) is a bit of a weakness, and that she’s not the only person she knows who nibbles on it. On the other hand, if she wants a cookie, she’ll bake some geared to human taste buds, not canine ones.