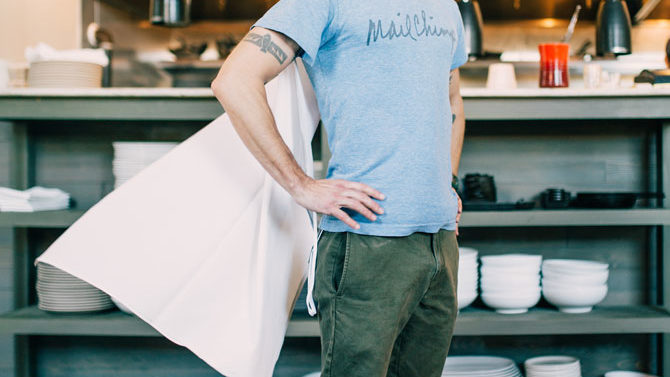 Hugh Acheson’s official website finishes up his long biography replete with national awards and honors with the following sentences: “But that’s to everyone outside of Athens. To Athens, he is the guy who owns those restaurants, has one eyebrow, a wife far better looking than he is and two young children who are the apple of his eye.”

It’s true. Familiarity breeds contempt, or at least forgetfulness, and Acheson is often first in line to take himself down a peg. He’s our Peter Parker: a guy from humble beginnings who praises his hometown and relies on nimbleness and wisecracks more than celebrity-chef firepower.

Acheson’s impact on Athens is barely visible to newcomers, but if you came here 20 years ago or more and remember what the dining scene used to be, you’d better give credit where credit is due. His impact at Five & Ten can be seen not only in the standards the kitchen has set—leading rather than following, always more refined and more interesting than the “cornbread industrial complex” revival of Southern cooking—but also in the fractal effect of the people it has trained.

Acheson is a cook and a businessman, but he’s a mentor just as much, and the number of high-quality restaurants in Athens and across the state run by people who started out working for him is high. If you don’t have Five & Ten, not only do you not have The National and Cinco y Diez, but you also don’t have Farm 255, Pulaski Heights BBQ, home.made or any number of others, each of which has gone on to create and develop its own talent. It’s a snowball effect, driven partially by demographics—millennials eat out more and think food is cool—but just as much by Acheson’s relentless insistence on quality and doing things the right way.

Having good fine-dining places to eat is wonderful for the folks who can afford them, but Acheson aims to democratize his project. It’s all very well to preach local and sustainable, but if you don’t get people on the train early and teach them what to do with vegetables, you’re only talking to the choir. Acheson’s work with Wholesome Wave, a nonprofit that doubles federal nutrition assistance dollars at farmers markets, promotes getting whole foods into the kitchens of everyone.

His newest project, Seed Life Skills, looks to remake the home-economics curriculum in public schools, with similar goals. Acheson says, “Small steps will win this race, and those first small steps are about your local sphere.” That philosophy and his genuine commitment to those small steps are what make him an Athens superhero.