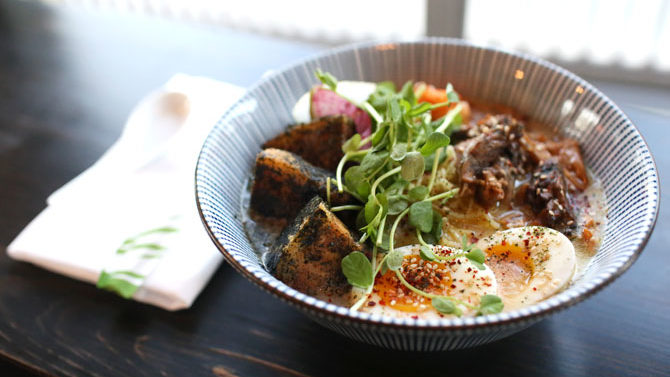 Ludwig van Beethoven supposedly once said, “Only the pure of heart can make a good soup.” That seems extremely doubtful, judging from the soups I have known and the cooks who have composed them, but soup is one of the great winter staples. Coming home at the end of a long day, frozen and cranky, there is nothing that will warm you from the inside out like a soup. We eat soup in the summer, too (vichysoisse, melon, corn), and in the spring (pea, shrimp) and fall (root vegetables, before we grow tired of them), but winter is the real home of the dish.

When people who have never been to Hugh Acheson’s flagship restaurant, Five and Ten, ask me what to order, I always advise them to get soup. It’s easy to overlook in favor of something sexier, but as chefs have turned over in the kitchen, the uniform excellence of the soups has never changed.

Jason Zygmont, Five and Ten’s current chef, has been in his role for just over a year. Zygmont reminisces about the first soup he created at the restaurant—one that I vividly remember eating and that is once again on the menu. Made with roasted beets, it arrives as a liquid-less bowl containing a smoked trout pierogi, horseradish cream, pecans, pea shoots and baby carrots. The soup itself was initially served in a tall silver teapot (the restaurant has since switched to Mason jars, but the silver seems especially appropriate for the Russian-style soup), which the server then pours elegantly into the bowl.

Most customers go straight for the protein, but restaurants spend more on vegetables than on meats, and they enable greater creativity in the kitchen.

In essence, it makes a Caesar-salad-style production out of a humble dish. It’s fun for the staff, and it allows the kitchen to plate the bottom of the bowl rather than hiding its hard work. It also means more textural variety, due to the garnishes having less time to wilt. Each spoonful can contain a different combination of flavors, textures and even temperatures.

Zygmont repeatedly refers to soup as “a salad with broth,” which is not the way we usually think of it, probably because its separate ingredients tend to disappear in a purée. Keeping the base clean and “pure” allows him to play around with other ingredients without violating the essential nature of the vegetable on display.

That’s not to say Five and Ten doesn’t do meatier soups—the Frogmore stew, made with gulf shrimp, Andouille sausage, grilled corn and fingerling potatoes in a tomato broth, is always on the menu; there are seafood offerings sometimes, and we’ll get to the ramen in a minute—but for the most part, they serve as a way to shed a light on produce. Most customers go straight for the protein, but Zygmont points out that the restaurant spends more on vegetables than on meats, and that they enable greater creativity in the kitchen.

Seasonality is both a cult and an aggravation, especially in the dead of winter, when one starts to jones for something bright and springlike, but it also serves to focus the mind. Zygmont says he’s not sure what he would do if he worked in California and had access to a “full bounty” all year long, speaking instead of the value of limitations. He points out that, although some times of year leave him the least room for experimenting, those same standards allow him to push other parts of the menu farther.

That comprehension of balance shows that Zygmont is more than a cook: He’s also a realist about budgets and goals, as well as what his customers will accept. Five and Ten’s popular ongoing Tuesday ramen night originated as a way to get people into the restaurant who normally see it as above their price point, a draw during the slow months of January through March, but it also serves as a showcase for broth, another way to get people to eat soup.

Here, again, Zygmont is a purist. Five and Ten makes tonkotsu (pork bone) ramen only. It’s the staple, with broth that simmers for days, rich in collagen to the point that you can feel it on your lips. Zygmont says Karen Fook, of Fooks Foods, has given it her tough-to-obtain approval, and he has to stop the kitchen staff from drinking all of it.

Much like vegetable-based soups, which get their base from onions sweated in butter, the main ingredient covered with water and bay leaves, it follows the kind of clean line that supplies a foundation on which one can build. In other words, Beethoven was at least partially right: Making good soup requires purity of purpose, if not necessarily of heart.