Cooking for Dummies with Help from Friends 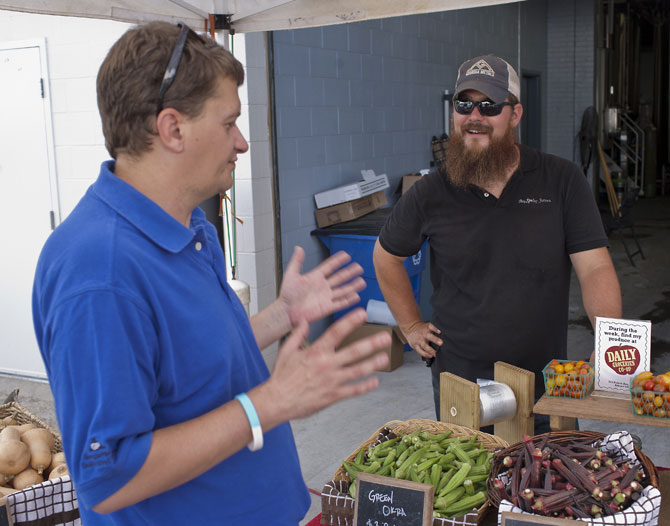 I’m a single guy with three male roommates. None of us can claim any expertise when it comes to cooking, but we all have healthy appetites. We are limited on cookware and utensils, so we needed some ideas for dinner.

I walked around the farmers market last Wednesday at Creature Comforts downtown for the usual free sample trip just to get in the mood and catch my breath. As I walked around, I told the vendors that I was thinking about making dinner and needed some ideas. I told them that I had some rice at home and was thinking about making some type of  Hamburger Helper/Rice-A-Roni-type dish, only with fresh, healthy ingredients.

At one booth, the woman behind the table said, “Good news. I sell hamburger meat and eggs.” I told her to put some meat to the side for me, so I could feed about six–eight people.

At the next table was the guy from The Sultan, a Middle-Eastern restaurant on Baxter Street. I informed him that I was making dinner and told him that I was using the hamburger meat from the lady in the next booth and some rice and asked if he had any suggestions. He replied that he would add eight ounces of sour cream to the hamburger meat right when it’s brown and almost done. He was nice enough to let me know that even though he didn’t sell the sour cream that I could buy it from the Daily Groceries Co-op on Prince Avenue.

I proceeded to the next booth, and a woman was giving out samples of her various cheese dips. She let me taste this cheese dip that was queso fresco. It had almost a cheesy-pizza taste to it, but she said it would go great with the hamburger meat and the sour cream that the Sultan restaurateur suggested. I then proceeded to the bread booth, and they suggested some soft pretzels as an appetizer. I must have “Yankee” written all over me, because I am from right outside Philadelphia. I can honestly say she had the best soft pretzels this side of the Mason-Dixon line.

My next stop was across the parking lot at the vegetable booths. I again informed them that I was going to take some rice from home, hamburger meat from the meat lady, sour cream at the suggestion of the Sultan restaurant, queso fresco from the cheese dip lady and have soft pretzels from the bread lady. I asked for suggestions. The first veggie guy suggested I get some of his chocolate sweet peppers and add them. The next veggie guy had some Heirloom cherry tomatoes, and the next had onions. The last few booths had fresh blueberries and another sold some type of sweet syrup to go on top of the blueberries for dessert.

So, here is the recipe for bachelors and students, fresh from the Athens Farmers Market. I haven’t quite thought of a name, so I hope you can make some suggestions, maybe “Skillet Stew?”:

Brown ground beef in pan. Cut up vegetables and sauté them. We used a frying pan; not sure if they were sautéed, but close enough. When ground beef is almost ready, add vegetables, sour cream, queso fresco and let simmer. While the mixture is simmering, cook the rice in boiling water and simmer for 15 minutes on low.

Serve on a plate or in a bowl. Put rice on the bottom and the meat/sauce on top.

For dessert, take some fresh blueberries and add some local sweet syrup.

This dish fed eight people with plenty for seconds.

What’s the moral of this story? You don’t have to know how to cook to eat healthy and support local farmers, bakers and cheese-dip makers. One additional note: My roommates and I are using EBT/SNAP. You get two-for-one at the Athens Farmers Market, so we had no excuses not to eat healthy due to costs. This is great for college roommates, too.

I just want to thank all my friends at the Athens Farmers Market, especially The Sultan, for their great dinner suggestions.