Eating on the Run 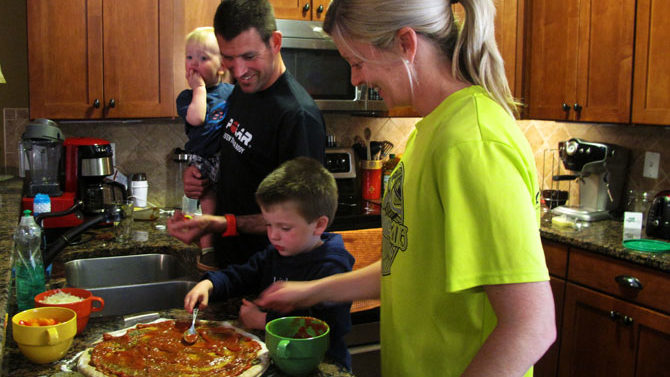 The night before a half-marathon, Kelly Pritchett’s magic meal is pizza. Sometimes she drops by the grocery store for a crust and tosses on veggies and cheese at home. Or if she’s going out, the University of Georgia sports nutrition professor might opt to grab a pie at one of Athens’ many pizza parlors.

With running comes eating traditions, and runners prepping for spring races like the Chick-fil-A Connect one-mile fun run, 5k and half-marathon this weekend have different takes on the best fuel for their feet. Pritchett says that runners preparing for a longer race, such as a half-marathon, may benefit from slightly increasing the carbohydrates in their meals during the two or three days prior to a race. Carbohydrates are an important source of energy, so eating foods like rice or potatoes as a part of these meals can be helpful.

Some runners prefer to devote more of their diet to carbohydrates earlier in the week and have a lighter meal the night before a race. Sara Howe, an Athens native who has been running for 15 years, says she likes to eat grilled chicken with sweet potato fries the night before a marathon or half-marathon.

Getting enough carbohydrates is less important for shorter races like 5ks and 10ks, but eating healthy foods is still key to a good race. The day before a race, Athens Road Runners President Julie Thompson typically drinks lots of water and eats foods like veggie pizza, oatmeal or a spinach salad. A busy Valentine’s Day found Thompson eating candy and skimping on water the day before Community Connection’s Taste 10k. Partway through the race, her legs begin cramping. Though she finished the event, Thompson says, “It was a huge reminder of how important nutrition and hydration are.”

Race day nutrition is also important. Many runners like to eat two hours before they race to avoid a full stomach, a feat that may require getting up as early as 4 a.m. for a morning race. A bowl of oatmeal or quinoa with fresh fruit is the perfect half-marathon breakfast for Ross Wise, a physical therapy assistant.

Breakfast can be smaller for a 5k. “I like to eat about half a banana,” says Russell Lawless, a UGA student who has been running competitively since high school. Lawless says he might also eat a granola bar when he first wakes up. Coffee is another pre-race must for many runners. “If you normally drink coffee, than it’s totally fine to include it,” Pritchett says.

While breakfast can provide plenty of energy to finish a 5k, mid-race fuel can be helpful for longer races. Some runners, like Katie Billings, carry energy gels, which are carbohydrates in the form of small gel packets. “Typically around mile 7 or 8, I’ll have a gel, and after that, like every five or six miles, I’ll have another gel,” says Billings. Athens Road Runners Secretary Tyra Byers prefers to carry pocket-size whole foods, like dried cherries, Fig Newtons or small cooked potatoes.

Gels or potatoes may get a runner through a race, but the body will need something more after crossing the finish line. Pritchett suggests runners try to get in a small snack within 30 minutes after a race or run, even if they aren’t hungry.

While food is important for race-day energy, using running as an excuse to eat anything and everything can be detrimental, especially to the person who is using running to maintain a healthy weight.

“From a weight loss or maintenance perspective, using food as a reward is a bad idea,” says Pritchett, who is a member of UGA’s Obesity Initiative, an effort to improve Georgians’ health through diet and exercise. “Often runners with this mentality end up eating more calories than they used in their run.”

WoW! Boot Camp founder April Williams, who started the exercise program after losing 40 pounds with the help of running, encourages runners to “in the simplest terms, eat healthy… Choose fruits and vegetables and whole grains.” While Athens runners have their own nutrition traditions, they share one race philosophy: Stick to what you know. You don’t want to shock your body with something new, Williams says. “Just like you don’t want to wear a brand new pair of socks on race day, you don’t want to eat something before a race you’ve never eaten before a long training run,” she says.

WHAT: The Chick-fil-A Connect Half Marathon

WHERE: Start/finish line at the corner of Hancock Avenue and Thomas Street

HOW MUCH: $20–85 to run; proceeds benefit Athens Area Habitat for Humanity