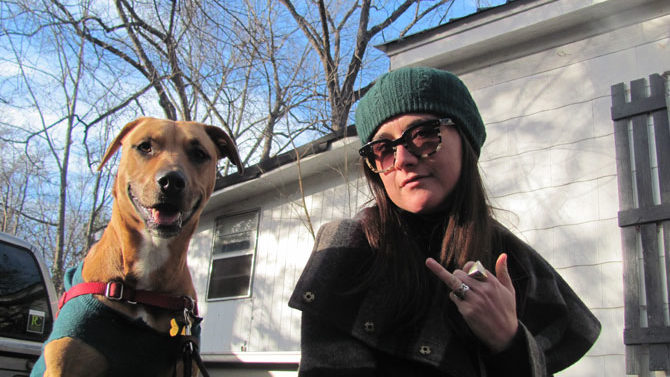 The Dawning of the Rawness. My dawn cracks at 2 p.m. today. That’s like most musicians, right? Stroking axes and sucking on joints all night long. Today is rich with meaning. It even has its own first-food-of-the-new-year meal, black-eyed peas and collard greens. It means $$$. I want to eat it. Instead, I’ll find symbolism in what I can eat. I eat a clementine in bed. What does that mean? Is it dirty? It is so Raw.

Later, I open the crisper drawer in my fridge to find what turns out to be one of the softest apples I’ve eaten. Will I have an ironic year? I eat it anyway with raw walnuts, which my dog Poco really wants some of, and she’s so effing cute, but girl, you know how expensive raw walnuts are? I feed them to her anyway, because The New Me is very generous. I drink tea that is not Raw-sanctioned, but I do what I want. After a lot of walking around my house rearranging things, I make some badass salad, in which shredded sweet potato is a highlight. Oh, and some chia seeds.

I wake up feeling good—slept like a lil’ baby. I drink some cold tea from the day before—it’s not gross. I eat an apple while I’m walking Poco, and I know it’s, like, uncouth to eat and walk at the same time, but it feels so efficient. Then, I go to work at Broad Street Coffee. I’m working with my buddy Al, who is also doing the cleanse, and who is always hungry.

I take home a kale salad from work, which takes me forever to eat, because I’m on this macrobiotic chewing spree where you chew your food for like a million years. I walk Poco while I’m still chewing, then I go to band practice. Al is still hungry, and so we fill up on JAMS. I come home and chew some more, and spend the rest of my clean-ass night on a potpourri of small home activities, the best of which is listening to my dope-ass reggae records and practicing C R E A T I V E S T R E T C H I N G.

The juice is loose. I wake up and make a pretty boss juice with celery, cabbage, ginger and spirulina. I go to work, where Al has already been showing off his garlicky juices. When it slows down, we take out our juices, lean against the counter and slowly sip them like a bunch of dorks. Cleanse with friends. Later on, there’s a point when I feel cold and hungry, but then a Roy Orbison song comes on 88.1 and fills me like a hot biscuit. I think that’s a pretty big deal when you’re on the juice. Warm music, hot showers—and sleeping. Sleeping tastes so good.

For dinner, I make pizza juice: beets, kale, celery, broccoli and a grip of garlic. (If anyone wants to get a load of me after drinking pizza juice, send me an email.) I wrap it up with some stinky tea, a stinky candle, a transcendental black metal record and some twisting around to squeeze all the junk out of my lymphs.

Green juice for breakfast. You know “GO GREEN” is copyrighted? So is “GOGO GREEN” and even “GO GO GO GREEN.” So, I’m gonna GOGO GOGO GREEN in 2013. My four Gs: Eat Green, Make Green, Smoke Green, Wear Green. Red juice for dinner. I’m drinking so many beets, my pee is pink. I drink some tea containing caffeine (#oops) at band practice, which Al gives me a hard time for. I don’t even care.

So, if stretching can be yoga, then anything good you can do with your body and your mind is yoga. Like, riding your bike or your skateboard or running around can be yoga, and making music or making art or making out can be yoga, too, and then sometimes smoking weed is yoga. So, I’m yoga-zoned on the juice, and I’m feeling so good. I’m gonna go to the party. T.G.I.F.

I did not get much sleep, but I’m gonna make up for it by making a juice with a million pounds of kale. I drink some cold water that’s hanging around my room. It’s definitely older than I want to think about. It’s fine. Have you ever stomped your feet to warm up like they say they did in olden times? I think it works. I stomp around my kitchen and introduce a juice into the world: kale, apple, carrot, celery, ginger. It’s a good one. After work, I come home and walk Poco, and OMG my body is tired. Sometimes it’s all like OH I FEEL SO AMAZING, and even psychedelic, and then it’s like, oh, I forgot how to play guitar or use my phone, and I feel like laying down anywhere. It’s all good though; I just need the juice.

A virtue of extreme hunger is that everything exhibits a certain vividness. I interpret the phrases of the birds in the street: either “I am one thing but I am many things” or “You can go home or you can get a room,” and I think that’s super deep of them either way. I can smell how stinky things are better, and sometimes, colors are different, like, glossy or puckering. Also, I’m thinking about hunger pangs—if you don’t concede that they’re happening because you’re not satiated, then they become an entirely different thing all together. Like, oh, that’s not my stomach growling, it’s just a baby alien rolling around in my tum. Red juice for dinner.

MONODIET DAZE. We’re going next-level in our cleanse. It’s called Kitchari, which means “pile.” It’s ayurvedic, for real—mung beans and rice, designed to break fasts. I guess it looks like a pile. I have my first bite of it, and I am almost late for work, because I want to sit and feel the buzz. It’s heavy. I really like mono in many things. Monochromatic fashions—I wear all hot pink today and look like a big smoothie. I also listen to my records in mono. It’s like one big, fuzzy, hot hand reaching out at you.

I may as well tell you now: I drink some coffee. I’m pretty sure that’s illegal. It makes me feel like “somebody” who snorts Adderall. I pull out my pile at work, and it’s really wet and “looks like throw-up,” someone says. Al and I eat it cold with spoons. I like spoons. All I want to do is watch “The X-Files” tonight. Whose Netflix can I use? Will I get spooked? Anything weird my dog hears at night I already assume to be aliens, anyway, so it’s fine. I get spooked listening to Butthole Surfers when I’m alone at night. Alone and eating mung beans. I’m eating more pile tonight. I may have a thimbleful of wine, because it’s Sunday. Wine is kind of like a strong tea. It’s fine.

LAST DAY. I’ve been listening to Wipers’ Youth of America every morning while I stretch, and it’s so good. I wear all green today and look like a huge mung bean. I drink epic liquids at work—I don’t feel like pulling out my pile. Sidenote: I recently realized that I don’t think I’ve farted yet in 2013. Is that right? What’s going on?

Anyway, I feel pretty good. The grossed-out feeling I had post-holiday is gone, as is the drinkle (drinking wrinkle) I get during bouts of concentrated celebration. But S H A D E has a show tonight, so that means tons of coke, a case of Tanqueray and a gang of hot 18-year-olds. Maybe I’ll fart tomorrow.

I eat some pile after work, but I’m totally over it, and feed most of it to Poco, who loves pile. We have band practice before the show, where I tell Al that I’m “thinking about” eating a pear, but he vetos it. He is apparently going to keep eating pile for like the rest of his life, he loves it so much. I pound some Earl Grey instead.

The show is cute and at the Globe. I drink some pale ales and pretend-laugh and real-laugh at a bunch of goofy shit with my dear friends. I love pretend-laughing. I guess that’s the last thing I’ll impart to you here: 2013, PRETEND TO LAUGH. Oh, and 2013 GOGO GOGO GREEN. Yeahhh.