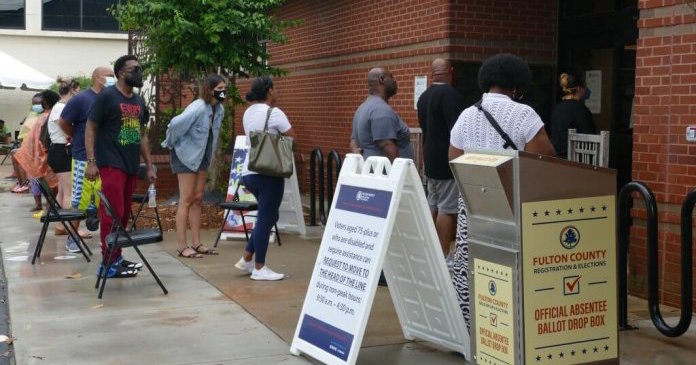 The flurry of GOP election bills filed this week has Democrats, voting rights advocates, political science and voting law experts saying most of the legislation would discourage voting and face legal challenges.

Members of the GOP Senate Caucus followed through this week on a December pledge to sponsor legislation changing how Georgians access the ballot box, a move that comes after voters cast a record number of absentee ballots in the 2020 elections that helped Democrats sweep statewide races for president and two U.S. Senate seats.

Among the absentee measures is Senate Bill 71, which calls for eliminating the GOP-created 2005 law that allows Georgians to vote absentee without giving a reason. It would instead extend that exception to vote by mail only to people 75 and older, the disabled, the military and voters who won’t be in town during the election.

Last year, a record-shattering 1.3 million people cast absentee votes in the Nov. 3 general election, with more than a third of those coming from Georgians who would not qualify if SB 71 becomes law.

More than two dozen state senators are on board with a law to require photo ID to vote absentee with exceptions for using a driver’s license number or a state ID.

Counties across Georgia set up absentee ballot drop boxes in secured settings to provide an alternative to the postal service for voters who preferred to avoid long lines at precincts and the risk of exposure to the coronavirus at the polls.

Another bill removes the automatic opt-in clause for voter registration when people get their driver’s license.

“All of these draconian bills that are being introduced are trying to take us back, but we’re not going back in time,” said Helen Butler, the executive director for Georgia Coalition for the People’s Agenda. “We intend to have free, open access to secure access to the ballot. And that’s what we’re fighting for today.”

In particular, changing the absentee voting ID laws could limit ballot access for hundreds of thousands of Georgians who now rely on that form of voting, said Aklima Khondoker, All Voting is Local’s Georgia state director.

“It punishes voters, especially those who are disabled, elderly or live in areas without internet access, or are lower-income by forcing them to clear another hurdle,” she said.

Most of the rash of Senate GOP election bills are sponsored by leaders of the Republican Majority Caucus and other influential members, including some lawmakers who backed efforts to overturn the presidential election results after former President Donald Trump’s narrow loss to Democratic President Joe Biden.

Many of those claims were disproven by several recounts of the presidential election that did not change the outcome and audits of absentee ballots that turned up no fraud. Also, Republicans Secretary of State Brad Raffensperger and U.S. Attorney General Bill Barr said there is no evidence of widespread fraud, with Raffensperger calling it the most secure election ever in Georgia.

Senate Majority Caucus leaders Butch Miller, Steve Gooch and the powerful Rules Committee Chairman Jeff Mullis did not respond to requests for interviews from the Georgia Recorder about voting legislation they have said will restore confidence in the election system.

While the Senate tackles election laws with a specially appointed committee, the House chamber will do the same.

“We’ve had two general elections in a row in Georgia that have been a lot of questions about it,” said the Republican from Harlem on Monday’s GPB Lawmakers. “We need to try to figure out how to bring Georgia’s confidence back to our election system.”

Georgia Democrats have pledged to vigorously fight any election bills they say would make it harder to vote, with the ensuing debate also expected to spill over in the nation’s Capitol and courtrooms.

“I see a desperate attempt by a party clinging to waning power so out of touch and too lazy to pivot a messaging to speak to a broader electorate,” said Sen. Nikki Merritt, a Grayson Democrat.

The GOP bills could run into trouble, though, if Congress restores part of the voting rights act that would require federal approval for Georgia to change voting requirements that restrict access.

The detailed versions of the GOP’s legislative voting agenda could contain provisions that violate the surviving elements of the Voting Rights Act that provides racial and ethnic minorities with First Amendment protection. It prohibits government from placing undue burdens on the right to vote, said Atlanta voting rights attorney Bryan Sells.

“They’re essentially intended to disfranchise one side and not the other, making them vulnerable on a couple of levels,” he said. “In this instance, the General Assembly can’t point to any actual facts, which justify restricting the right to vote here.”

This story originally appeared in the Georgia Recorder.