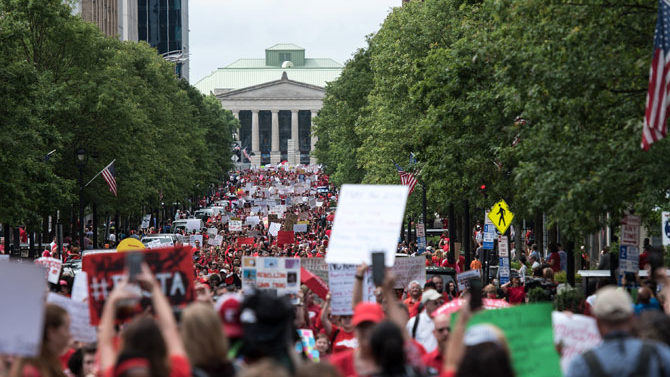 Twenty-four hours after more than 20,000 teachers and their supporters amassed in downtown Raleigh last Wednesday, forming a sea of red T-shirts that stretched down Salisbury Street to the horizon, the legislative leaders they were begging for help decided to change the subject. And what better way to do that than to unveil a new bill that would lavish millions more taxpayer dollars on billion-dollar corporations?

To be fair, that’s a glib oversimplification of a complex effort to lure Apple and Amazon, both of which have expressed interest in building major facilities here that would produce thousands of white-collar jobs and add to the region’s tech cachet. Minus the cantankerous warnings of a handful of libertarian types and one skeptical editor of a local alt-weekly, who’ve naively argued that maybe governments shouldn’t be playing this game of corporate-incentive extortion, doing whatever it takes to get Jeff Bezos and Tim Cook to cast a flirtatious glance our way has near-unanimous support. Hate the game, not the player, we’re told.

Still, there was something telling about that response. Since gaining control of the legislature in 2011, North Carolina Republicans have been on a singular mission to make life better for their wealthy and corporate allies. (And to keep black people from voting, but that’s a subject for another column.) Among a great many other things, they’ve scrapped a progressive income tax and replaced it with a flat tax, along the way eliminating an earned income tax credit that helped lower-income working families and broadening the state’s regressive sales tax.

According to an analysis last year by the NC Justice Center, the cumulative annual cost of the tax cuts the legislature has enacted since 2013 add up to $3.5 billion, and some 80 percent of the benefits go to the top 1 percent of earners.

These enormous tax cuts have, of course, been paired with massive spending shortfalls, which allows the state’s GOP to boast of annual surpluses. And nowhere has this been felt more than in education. Today, North Carolina is 40th in the nation in education quality, according to Education Week, and 39th in school funding and 37th in teacher pay, according to the National Educators Association. Adjusted for inflation, per-pupil spending was down almost 9 percent from 2008–’09 to 2016–’17, according to the Justice Center.

This has shifted the burden to the state’s counties, especially in higher-cost urban areas desperate to attract and keep quality teachers. Wake County, where the teacher protest took place, has raised property taxes—another flat, regressive tax—each of the last four years to compensate for education shortages and provide supplemental pay. Even that wasn’t enough: In Democratic primaries earlier this month, voters tossed out two self-styled progressive incumbents for being insufficiently committed to education.

At the same time, the proliferation of charter schools in the state—and the legislature’s wide-eyed reverence for all things “school choice”—has further drained resources from traditional public schools. According to a study from one Duke University professor, charter schools have cost Durham County more than $500 in funding per student in traditional schools.

Teachers, meanwhile, are taking on second jobs, and in some parts of North Carolina going on public assistance to make ends meet. They moonlight as pool-desk attendants at the local Y and teach night school and do construction and tutor on the side; they buy school supplies for their students and don’t have enough desks in their overcrowded classrooms; they wonder about leaving the profession altogether.

So, May 16, the first day of the General Assembly’s session, they marched—just as teachers in West Virginia, Oklahoma, Arizona, Kentucky and Colorado had marched earlier this year—first in the burning sun and then in the pouring rain. More than 40 school districts across the state shut down that day because too many teachers had requested time off to attend the march. (In North Carolina, public employees aren’t allowed to collectively bargain, and teachers aren’t permitted to go on strike.) Gov. Roy Cooper, a moderate and excruciatingly cautious Democrat, touted his plan to halt yet another planned tax cut for corporations and top earners and put that money toward textbooks and pay raises for teachers. The North Carolina Association of Educators, which organized the march, called for teacher pay and per-pupil spending to be brought up to the national average.

And for the most part, legislators shrugged. One state representative railed about “teacher union thugs.” Senate leader Phil Berger scorned the rally as nothing more than a political event. House Speaker Tim Moore pointed out that teachers had been given raises over the last five years, including a scheduled 6 percent raise this year, and that North Carolina was raising teacher pay at one of the fastest clips in the country, so why weren’t they more grateful? Moore’s office blamed the Democrats who were in office when the recession hit for the severe education cuts that followed.

But the recession is gone, and these are heady days for North Carolina’s economy—something for which Moore and his ilk are all too happy to take credit. The money is there to put North Carolina’s schools in good working order, as the legislature is constitutionally required to do. But instead, the General Assembly has gifted its rich pals with tax cuts—and now it wants to give millions upon millions more to some of the world’s richest corporations. North Carolina’s teachers tried to warn them that there would be hell to pay. As they crowded into the legislative gallery, they chanted, “Remember, remember, we vote in November.”

The Apple and Amazon projects may have merit, and they’d probably produce big-time economic benefits if they come to fruition. But so would world-class public schools.

Billman is the editor in chief of INDY Week.