The Nazis Went Down to Georgia 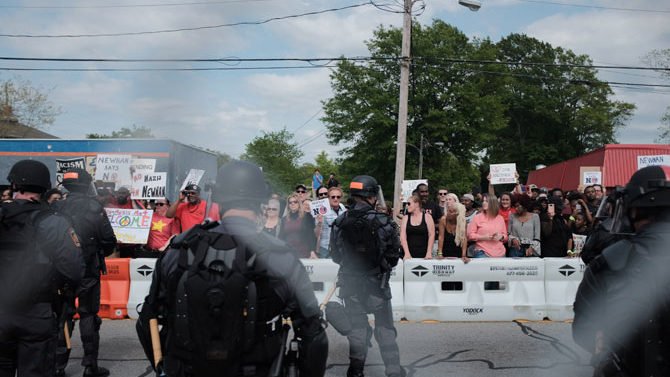 It was 4 p.m., and the Nazis were an hour late. Several people made jokes like, “I thought the trains were supposed to run on time” and “not very good Germans, are they?”

The neo-Nazi group the National Socialist Movement, out of Michigan, had reserved Greenville Street Park in Newnan from 3–5 on Apr. 21, the day after Hitler’s birthday. The choice of location—a small metro Atlanta town of about 38,000 people—is still a bit of a mystery. There is a confederate statue in front of the Coweta County Probate Court downtown, and that could have been a draw reminiscent of Charlottesville. It was shockingly well guarded by riot police even though it was three blocks away from the park.

But that perfectly encapsulated the day—police were protecting Nazis and property.

I arrived in Newnan around 2 p.m., later than I wanted but early enough to park just outside downtown in case things went sideways and I needed to run. The downtown shopping district was mostly closed for business—one bar with a large patio carried on to serve spectators—and the police presence was extreme. I witnessed sheriff’s deputies in camouflage jump out of what appeared to be a tank without a gun turret and arrest a handful of protesters. I was told they committed the crime of standing in the street. This was a big deal for the 700 law enforcement officers present (from 42 different agencies, as reported by The New York Times). As I latched onto a very welcoming crowd of old hippies, possible antifa and other random counter-protesters, law enforcement constantly yelled at us to “stay on the sidewalk!” and “no masks!” Masks were the other big no-no (a 1950s Georgia law aimed at the KKK prohibits wearing them at public gatherings). Almost every arrest I saw was provoked by some counter-protester putting on a mask or bandana covering part or all of their face.

We were stopped at a blockade of trucks and directed to a checkpoint. By then, in our ranks were protesters of various levels of militancy, from black bloc-style antifa kids in their early 20s to locals who had never demonstrated before. Guns were everywhere. Outside the checkpoint, where I saw the most arrests, half a dozen police officers tackled one young protestor for putting on a mask while another five chased a shirtless kid, likely for the same reason. Or because he stood in the street.

Those seeking entry had to empty their pockets and be patted down by an officer. Prohibited items included pins, bandanas, flags, signs with stakes or poles, pens, water bottles and knives. Firearms were allowed if you had a permit. Glancing at one of the trash cans, I saw a set of nail clippers.

The checkpoint and arrests were a reminder of the extreme militarization of local law enforcement. Why this show of force? Was it so the town could keep its citizens safe, and if so, safe from whom, Nazis or counter-protesters? Was it to protect property, or was it to protect freedom of speech? When Nazis have an armed escort provided by the state to a secure location to spout hate, it’s hard not to see it as preferential treatment.

Demonstrations are exactly what that word implies: performances and media events. Each side is there to make a spectacle. But the city shows how far it will go to protect its citizens and property (public and private). Law enforcement—who arrested 10 people—shows its concern with jaywalking and the dangers of a 22-year-old leftist kid wearing a mask.

After I went through the checkpoint, I found the real event. I could tell because that’s where the television cameras were.

I clocked the arrival of the Nazis on the columned stage in the park at 4:08 p.m., and finally the crowd of about 200 people around me had a definite direction for shouting, chanting and “loud love” (many had chosen a high road to counter hate with affirmations of equality). From my position there looked to be only about 15 Nazis, but some reports put them at about two dozen. The crowd yelling at them was mostly African-American, and some people were in organized groups led by church leaders. An older man in a Black Panther Party shirt and beret told stories about Malcolm X, and we were all entertained by a white woman, “Donna J. Trump,” who gave an on-point impersonation of our president.

Since the Nazis were late, they had less than an hour to spread their hate. The wall of sound kept their amplified propaganda from going anywhere, but it was unclear whom they thought they would influence anyway. The downtown had been cleared, and all the businesses were closed. It was just Nazis and counter-protesters. In between them was an insurmountable, if makeshift, border made of a chain-link fence, plastic ramparts, a line of police officers in riot gear and another row of plastic ramparts. Hundreds more police officers and sheriff’s deputies surrounded the area. Drones flew close overhead, helicopters high above them, and snipers were on the closest downtown rooftops.

Still, we shouted—I participated as a counter-protester—en mass to the police and over the police at the National Socialist Movement, “Black lives matter!” We belted, “No Nazis, no KKK, no fascist USA!” and “Say it loud, say it clear, immigrants are welcome here!” We shouted in call and response, “Whose streets? Our streets! Whose streets? Our streets!” Overhead, a small plane towed a banner that read, “NEWNAN BELIEVES IN LOVE FOR ALL.”

At 5 p.m. on the dot, the city cut the power to the park, silencing the Nazis’ microphones—per the permit’s stipulations—and everyone cheered. They came to exercise their First Amendment right, and counter-protesters arrived to exercise that right, but louder, in greater number. It was all legal and peaceful. And that was it, that’s what I came for, and those around me, too. Together we said, “not Newnan, nor Georgia, nor the United States will bow to hate.”

Sadly, this is not what has been reported in major outlets. Because of the excessive police presence, the “newsworthy” stuff was outside the cordoned checkpoints; the “real action” was in the streets, where 10 counter protesters lost their freedom.

Rothacker is a writer living in Athens. His most recent novel is My Shadow Book by Maawaam, available at readspaceboy.com.