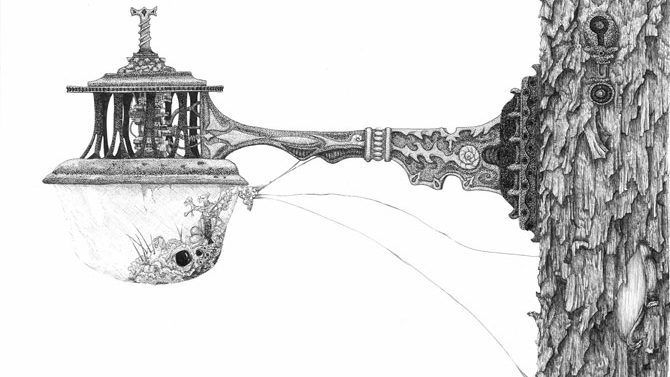 “False Witness to the Greater Humours,” a solo exhibition of the latest black-and-white illustrations by local artist James Greer, pulls inspiration from the dreamworld to reveal the shadowy underbelly of the subconscious mind. Meticulously landscaped with fine-point ink pens, his surreal, otherworldly environments are often inhabited by unsettling creatures. A vivid dreamer, Greer keeps a sketchbook by his bed to quickly draw out any imagery worth waking for, and later fleshes the characters out in extraordinary detail. Each work’s loose narrative and symbolism remain open to subjective interpretation, mirroring its root in lucidity and imagination. Though at times nightmarish, many of the pieces retain a glimmer of hope amidst the darkness.