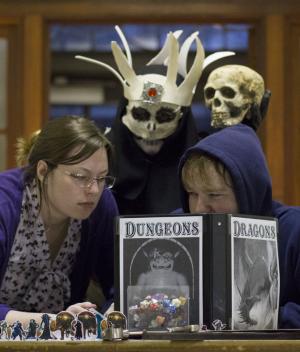 Written by Qui Nguyen, She Kills Monsters is a comedic trip into the world of fantasy role-playing games. When Agnes (played by Katie Nystrom) stumbles upon the Dungeons & Dragons notebook of her recently deceased younger sister, Tilly (Killian Ross), she decides to roll the dice and embark on an action-packed adventure in order to better connect with her. The game reveals itself to be a glimpse into her outcast sister’s subconscious, full of magical creatures based off characters from real life and loaded with movie, video-game and ’90s pop-culture references. Town and Gown Players’ Second Stage production will be directed by W. Steven Carroll, an avid tabletop roleplayer, who has also directed T&G’s Evil Dead the Musical, Dracula and the Rocky Horror Show. Friday and Saturday performances begin at 8 p.m. Sunday’s performance begins at 2 p.m. Admission is $5.