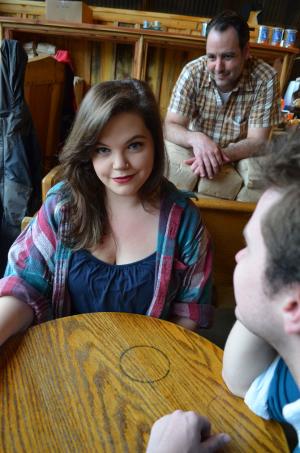 Written by professional playwright and UGA professor John Patrick Bray, Donkey is Rose of Athens Theatre’s first fully staged production from its No Shame New Playwrights Series, a program that showcases new works by emerging playwrights. Susan Paige Lane (RoA’s 2013 To Kill a Mockingbird) directs this satire of small-town politics in which the livelihood of Steve Ryan, the owner of an independent coffee house in a college town in upstate New York, is threatened by corporate coffee shop Quick Java moving into town. After alienating his regulars—an undergrad employee, goth kid, performance artist, newspaper reporter and third-party major—he devises a way to sabotage the grand opening of his competitor. Due to mature content, this show is for adults 18 years old and up. Following each performance, audience members are invited to take the stage and share a song, poem, comedy routine or acting scene in an open mic night. Performances begin at 7:30 p.m. and admission is $16.