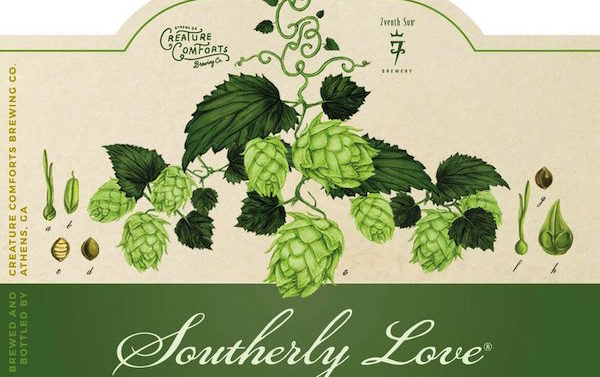 Back for the first time since 2014 is Southerly Love (6.4% ABV), an American Wild Ale brewed with Belgian brettanomyces yeast and Idaho 7, Cascade and Crystal hops, giving it papaya and tangerine flavors to go with brett beers’ trademark funk. The collaboration with Florida’s 7venth Sun Brewery will be available on draft and in 750-milliliter souvenir bombers at the brewery starting Jan. 17.

In honor of its Get Comfortable campaign supporting local nonprofits, Creature Comforts is also releasing a new IPA called—get this—Get Comfortable (7.2% ABV). It features a new type of hop, Cashmere, that’s described as having melon, lemon/lime, pineapple and coconut flavors, as well as a little Citra, which is also a key ingredient in their flagship IPA, Tropicalia.

Terrapin’s annual Wake-N-Bake-Off is coming up Sunday, Jan. 22 from 5:30–7 p.m. The stout—brewed with Jittery Joe’s Coffee—will be paired with sweet and savory dishes prepared by pro and amateur Athens chefs. Tickets are available here. There’s an option for early entry, which also entitles you to pours of a couple of special releases, Rise-n-Shine and Free Spirit.

Terrapin has also once again partnered with hit TV show “The Walking Dead” to produce a blood-orange IPA, this time in cans rather than bombers. Look for it in mid-February.

Already out is this year’s edition of Mosaic, a seasonal IPA brewed with juicy and piney Mosaic hops.

On Tuesday, Jan. 24, Heirloom Cafe will host a pop-up dinner featuring brews from The Southern Brewing Co. and Akademia, a new brewpub from The Savory Spoon’s Josh Aaron that’s opening in what’s currently Musician’s Warehouse on Atlanta Highway. (SBC has been helping Aaron get geared up.) Tickets are $40 per person or $75 a couple; call 706-354-7901 to reserve a spot.