Send Us Your Thanksgiving Horror Stories 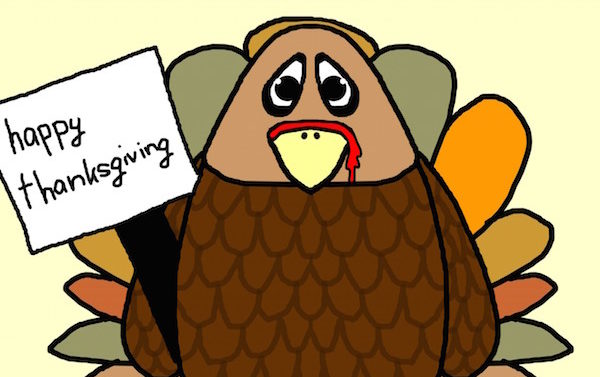 Thanksgiving is a time for, well, giving thanks, in addition to, as Louis C.K. put it, eating until you hate yourself.

It’s also a time when the preparation of various foodstuffs can go horribly awry—not to mention an occasion for getting into epic political arguments with your Fox News Russia Today-watching relatives, plus various other wine-fueled conflicts that occur whenever you pack a bunch of people into a house who don’t really like each other but are supposed to pretend they do.

At my in-laws’ gathering, we managed to avoid politics and salvage the burned yams, and their first-ever attempt at deep-frying a turkey somehow went off without a hitch. So far, so good—until my car broke down on the way back, 80 miles from Athens, dog and toddler in tow. Ninety minutes and a trip to Walmart later, a Good Samaritan and I had managed to swap out the dead battery, which necessitated disassembling half the front end of my car using nothing but a multitool. Good times! (It could have much worse, though, and yes, I’m thankful it wasn’t.)

Oh, and my daughter puked all over me. But it turned out she wasn’t sick; she just ate some bad yogurt! Thankful!

Leave your Thanksgiving stories in the comments below, or email them to news@flagpole.com. The funniest/most horrifying might even be chosen for our year-end Slackpole issue!