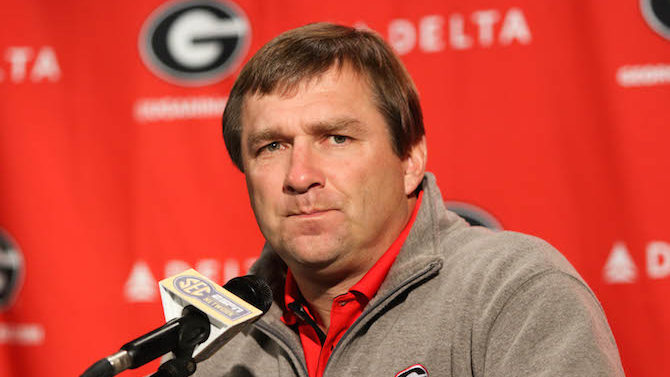 In 1984, Georgia Tech traveled to Athens and beat Georgia for the first time in seven years. The Atlanta Constitution‘s Lewis Grizzard, a Georgia fan, was tasked with writing the report on that game. The copy he filed is now legendary. His column was only eight words, and that was all that was needed to sum up the feelings of Bulldog fans everywhere:

“Frankly, I don’t want to talk about it.”

Following Georgia’s heartbreaking 28-27 loss to Tech in Athens on Saturday, I’m feeling the same way Grizzard felt in ’84. Of course, I don’t have the kind of pull the late, great Grizzard had, so filing only eight words wasn’t gonna fly. Instead, I will offer my final analysis of Georgia’s 2016 regular season, which also comes out to eight words:

This team doesn’t know how to finish games.

The game was even in the first half, but Georgia—specifically the defense—came to life in third quarter. The Bulldogs only allowed 21 Yellow Jacket yards in the third period. What it looked like was all the potential of the defense was finally coming to fruition. I thought I was watching the defense transform from a middle-of-the-road to an elite unit in front of my eyes. With a little less than 10 minutes to go, Georgia led by 13 and had Tech pinned on their own 4-yard line. It looked to be all over for Tech but the crying.

Then Georgia’s defense crumbled, and Tech rose to the occasion. The Jackets drove 96 yards in seven plays to score. Tech intercepted Jacob Eason a few minutes later, and was able to finish off Georgia with another touchdown with only about about 30 seconds remaining. The Dawgs scrambled to get down the field in position for a field goal. They almost did it, too. But that severe case of wiener fingers that’s afflicted the receivers so often this season struck again on that final drive. The Bulldogs didn’t have it in them to finish the drill.

The most frustrating thing about this season isn’t that Georgia finished at 7-5. It’s that Georgia had a chance to finish 10-2. We were one play away from a win against Tennessee, and only a few plays against Vanderbilt and Tech. The only two teams Georgia played that were undoubtedly better were Ole Miss and Florida.

Of course, there is a large swath of fans who are already ready to be done with Kirby Smart, just as there were large swaths of fans ready to be rid of Mark Richt each time he had a mediocre season. Anyone who has read this column frequently knows that I have my concerns about Smart, but my concerns draw from the causes—bad performances at the end of games—and not the effect, a 7-5 record.

I’ve said it time and time again, but I think many fans who were confused about what hiring a new coach means. Yes, we looked at nine wins last season and a fairly easy schedule this season and thought nine wins should once again be the goal. First of all, Georgia was lucky to reach that number of wins last season. Second of all, it is extremely rare for a new head coach to meet or improve upon the record of his predecessor.

College Football Matrix looked at first-year head coaches a few years back, and the situation Georgia finds itself in is pretty par for the course. Seven wins is a threshold. Teams who replace a coach with more than seven wins finish with a worse record 52 percent of the time.

Smart had the kind of season in his first year as a head coach that most coaches have in their first years as a head coach: inconsistent and mediocre. If we expected more, we were fooling ourselves. Smart didn’t do a bad job this year. He didn’t do a good job, either. He did a job. Now he knows how to do the job. And, from now on, he has to do the job well. You only get goodwill in your first season, then you’ve gotta start really winning. Next year, the late collapses need to be fixed and Georgia needs to, at the very least, be in the hunt for the SEC East until the final weeks of the season. But if Georgia has another mediocre season and the team still can’t finish the drill…

Frankly, I don’t want to talk about it.

Send Us Your Thanksgiving Horror Stories