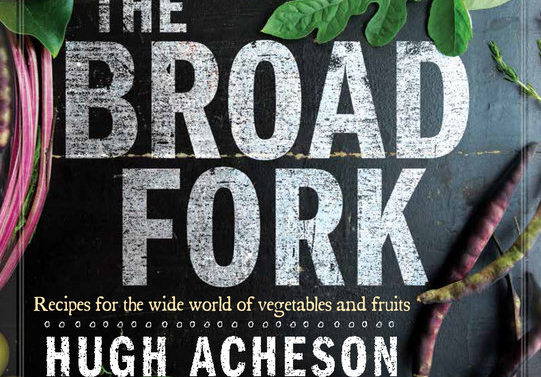 With Sal Speights taking off to hike the Appalachian Trail, Heirloom Cafe is announcing Joel Penn as its new head honcho in the kitchen. Owner Jessica Rothacker says Penn, who has worked at both The National and East West Bistro, “will make his debut at the Tailored Events Ecuadorian pop up dinner here at Heirloom on Sunday evening, and will roll out his new dinner menu on Tuesday evening. His style of cooking will bring an update to Southern classics and native Georgia dishes, reflecting the international influences found in Georgia foodways, while still paying homage to the original classic techniques. We are very excited to have him with us.” Tickets for the pop-up are $50 and can be purchased online here.

Hugh Acheson’s The Broad Fork: Recipes for the Wide World of Vegetables and Fruits (his third-ish cookbook, depending on whether you count Pick a Pickle as a book or not) is officially out, and Five & Ten is hosting a signing party Sunday Saturday from 3–5 p.m., with snacks and a cash bar.

The space in Five Points that housed YoBo Cantina Fresca is advertising itself for rent.

The annual Good Food Good Beer Block Party is happening May 23 from 1–4 p.m. Tasty little eats, Creature Comforts beer (the brewery is hosting, and if you want to drink beer, it’s $12 for a ticket; food is a la carte) and proceeds to Wholesome Wave Georgia and the Athens Farmers Market SNAP doubling program.

Downtown Athens is getting a Wing Zone at 142 W. Clayton St., presumably in the vacated Yoforia space.