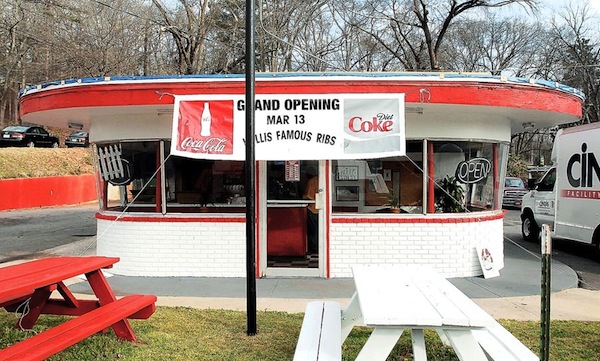 In between frozen-custard stand and vegan restaurant, the space at the West Broad Street-Hancock Avenue intersection was a barbecue joint.

The nice little building still probably best known to long-time Athenians as The Arctic Girl and most recently housing Broad Street Coffee is finally getting another tenant and one doing something more ambitious than hot dogs. The new place, called Preserve, aims to open in June and is headed up by Ella Sternberg and Lenny Miller, of local band Cancers. Reached for comment, Miller said:

Yeah, well it’s a 12 seater, as you know and focusing on delivery/takeout and brunch/dinner. We’re going to do take out on bicycles catering to almost all areas downtown, Normaltown, Boulevard.

Brunch menu extends from Farci (stuffed french toast), to frisee salad to the vegan ‘punk gruel.’ House-made sausages along with in-house farmer’s cheese and preserves should hopefully set us apart from some places, catering towards more of a casual and cool atmosphere.

We’re not gonna have a deep fryer, and not fry stuff as much as the next and focus more on the fat of the meat, or the sweet of the veg.

We’re going down there today to do some painting, gardening and washing on the outside of the restaurant. We’re aiming for a June opening, and it’s going as planned thus far.

Queried as to their level of restaurant experience, Miller added, “I have a couple years of french rustic canadian cuisine under my belt along side some Canadian vegan west coast local approach to food. Trying to blend it all in one big southern rustic Canadiana style.”

The band will continue to exist. Its drummer and bass player already live far, far away, so touring necessitates a condensed approach that should not affect restaurant hours.