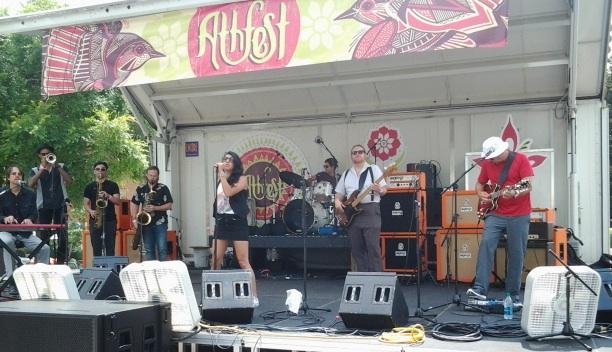 Technically, it was Saturday: The day started off with the always-solid The Whigs at the 40 Watt, a welcome respite from all the weirdness I put my decidedly non-hipster cousin-in-law through during our Friday night out on the town.

Then it was on to Caledonia Lounge to catch my predecessor as City Editor, Dave Marr, he of the too-tight skinny pants (we kid because we love) and famously mellifluous voice.

But Saturday didn’t really start until I’d slept and rehydrated enough to face the heat; around 2 p.m., in other words. First stop: the Slush Fund Records showcase at Little Kings, where I caught a tight, if unimaginative, power pop band called The Head and swapped political rumors with state Rep. Spencer Frye. (Mike Hamby for mayor? Alice Kinman?)

On the Pulaski Street stage, Atlanta’s Ruby Velle and the Soulphonics turned in a workmanlike R&B set. Velle has a pleasantly gritty voice, and her band has chops, but ultimately it was soul-by-numbers with no real emotion beyond poster-ready platitudes about believing in yourself and following your dreams.

For a cynic like me, the antidote to all that positivity was a block away, at Caledonia’s un-officially-sanctioned Dirty Athens day party, because there’s nothing like moody punk and post-rock on a beautiful afternoon. Some of the couple hundred people there looked like they hadn’t been up early enough to see the sun since the last AthFest.

Believe the TaterZandra hype. The obvious touchstone is Sonic Youth (right down to the slightly-off-key blonde singer) but at the same time more discordant than that band’s poppier work and more accessible than its stranger stuff. 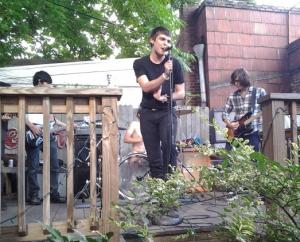 Muuy Biien—fresh off singer Josh Evans’ self-consciously “punk” Flagpole Music Awards pseudo-acceptance speech—apes just about every punk band ever, from Black Flag to Minor Threat to Wire. But they do it so well that it hardly matters. Evans’ surly teenager routine works on stage, even if it doesn’t go over as well behind a podium, and these guys are so young and talented that it’s hard to imagine they won’t continue to come into their own. The only thing that marred the show was all the photographers swarming around the deck that doubled as an outdoor stage.

I shared Gabe Vodicka’s enthusiasm for Shade’s Friday night set and the newfound power in Phelan Lavelle’s vocals (though, for me, it brought to mind early P.J. Harvey). Saturday, Will Donaldson’s driving, fuzzed-out bass took center stage during a different but no less impressive set.

And then it was disco nap time for this old man. Walk the dog, etc. My black lab mix, Franny, apparently has a different opinion of Shade. Donaldson happened to walk by, and she went nuts barking at him. (Sorry! If you’re not a squirrel, bird or firefly, she means you no harm, I promise!)

My wife stayed behind at Caledonia for Maserati, which she likes to play while she’s cleaning the house. Mrs. City Dope informed me they played all her vacuuming favorites. (Just to be clear, yeah, I wash the dishes, too.) 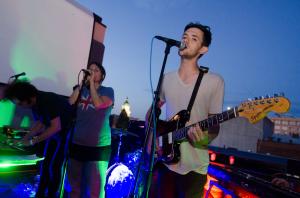 Rested up, I ventured back out for the annoyingly-spelled k i d s on the Georgia Theatre rooftop. Jared Collins, armed with a horn section, traded in his usual distortion-drenched melodies for something cleaner and more psychedelic. It worked. (At least, I think it did. It was hard to tell with all the socializing going on.) The sexy synthpop of PacificUV followed.

Tired of the crowds and the chit-chat—seriously, shut the fuck up, people—we moved on. From there, it was a matter of finding anywhere we could actually fit. Everywhere was as crowded as the dairy case in Paula Deen’s refrigerator, y’all. One JB sausage and one lengthy bitch session with some former Banner-Herald colleagues later, we wound up at Farm 255.

Surprise, surprise: Farm was running behind. Nymph, former Athenians Jeff Tobias and Jim McHugh’s new Brooklyn-based project, took the stage a half-hour late. Under different circumstances, it probably would have been mind-blowing, but by that time I was tired and cranky and in no mood for an Afrobeat free-jazz jam fronted by Yoko Ono. So I left. How was Space Trucks?

Who the Hell Are These Bands? Maserati, Blue Blood, Easter Island, Dead Confederate

Sunday in Photos: Patterson Hood, St. Paul and the Broken Bones and More